Okay, this is one of those ‘for the love of god, don’t try this at home’ kinda things, but someone else with an early 7700K sample has delidded his CPU and managed to sort out the chip’s super-hot thermals when running at high frequencies.

Is Kaby Lake going to be the bestest processor ever? We’ll know for sure soon, but we’ve already put the Core i7 7700K through its paces in the PCGamesN test rig.

Overclock3D has the full skinny on RichUK’s overclocking fun, but he’s found that by replacing the thermal interface material (TIM) Intel have been using on their Kaby Lake chips he can cut the operating temperature of his 7700K by up to 26°C. That’s a huge drop in thermals and given my chip tops 90°C when it’s running (admittedly less than stably) at 5GHz it would make a massive difference to its efficiency.

Though it has to be said it’s not like the Skylake chips were particularly chilled – my 6700K hits 89°C when it’s running at 4.5GHz and pushed to its processing limits.

Rewinding a bit… delidding is the process of removing the heatspreader (the bit of metal that makes contact with your CPU cooler) from the top of the chip and either replacing the TIM inside or having your cooler directly attached to the real meat of the processor itself. It can make a massive difference to the temperature of your chip – as shown by RichUK – but you do run the very real risk of utterly b0rking your expensive bit of computery stuff.

The act of taking the heatspreader off alone requires so much force it can do the bad thing to both PCB and silicon alike, but the fact that all it takes is some slightly better goop underneath to completely fix the temperature spikes is a bit frustrating.

Intel have had TIM issues before (a beautifully absurd phrase…) which were fixed when they released the Haswell refresh Devil’s Canyon chips. They used a different polymer in the Devil’s Canyon TIM, which made them overclocking beasts, but it looks like Intel have gone back to the ropey old-school stuff for Skylake and now Kaby Lake. 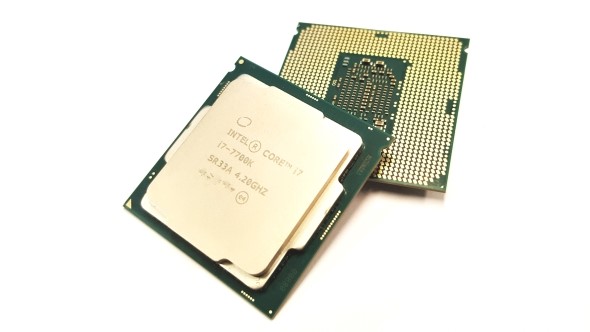 Maybe it would push the cost of the Kaby Lake processors up too much to use a better TIM inside their package. Or maybe it would be negligible considering the overclocking-focused K-series are already demanding a price premium…

Now, our Core i7 7700K sample was able to boot at 5GHz easily, but no matter what voltage I used I couldn’t get it 100% stable across my benchmarking suite. The toasty operating temps might have had something to do with that, but it is possible there’s a hard limit in the Kaby Lake design which means it can’t perform at those heights.

If so, then it doesn’t really matter if they stick some SuperXChillz 5000 GTi goop inside or scrape some Wrigley’s off the bottom of an engineer’s shoe and jam it inside.

Still, we can hope the final retail samples end up using a different material to conduct heat away from the silicon, but given the Skylake chips are still getting mighty hot I wouldn’t hold out too much hope.