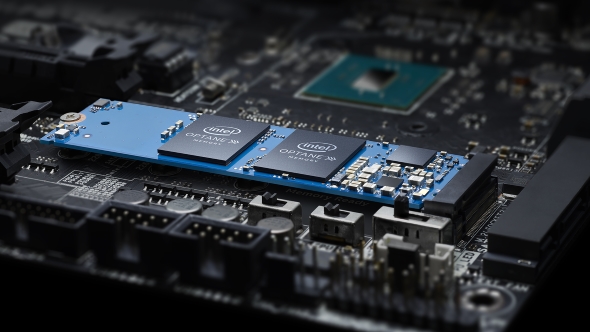 Intel’s new Optane Memory has just been launched, offering to give your high-capacity hard drive a solid state performance boost. Remember those little cache drives nobody bought when SSDs used to be expensive? Yeah, it’s kinda like that.

You’ll do better with a proper solid state boot drive, so check out our pick of the best SSDs around today.

The new Optane Memory follows on from Intel’s launch of their Optane SSD DC P4800X enterprise-level drive a week or so back. Both use the joint Intel/Micron 3D Xpoint memory design, a new non-volatile memory standard which promised 1000x the performance of NAND and 1000x its endurance when it was first announced.

Because of its 3D nature – the crisscrossing lattice of silicon is formed of stacked memory components and interconnects – the 3D Xpoint memory is also designed to have higher density than traditional 2D memory products too.

Intel are the first to get 3D Xpoint products to market, with the Optane Memory devices due to land on April 24. This will come in two forms, one 16GB accelerator and one 32GB version, costing $44 and $77 respectively. They’re based on the same M.2 form factor the latest PCIe-based SSDs use, hence why most of the Optane-ready 200-series motherboards introduced with Kaby Lake have come sporting two discrete slots. 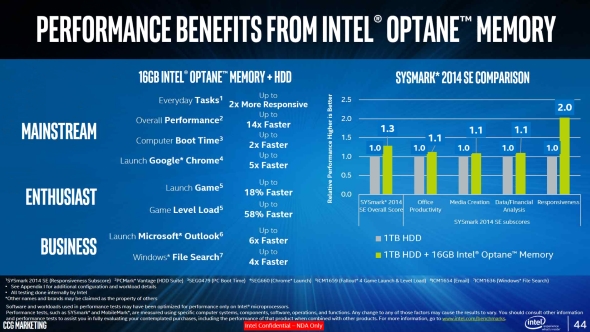 Intel claims the positioning of the devices makes sense given the huge storage demands of modern games (pointing fingers at poor ol’ GTA V and its 65GB install) and the fact that there are still an estimated 79% of PCs still using spinning mechanical platters for their primary storage.

By dropping an Optane Memory stick into your PC and operating it through Intel’s Rapid Storate Technology (RST) software, they say you can boost the performance of your machine, offering boot times that are twice as quick, game loads that are up to 18% faster and level loads up to 58% quicker. 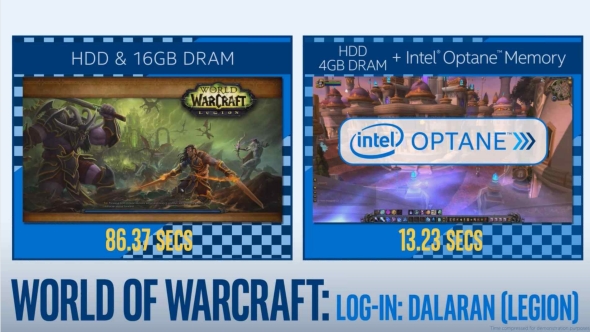 I have to say none of that really chimes with those 1000x performance of NAND claims from Intel back in 2015 and the endurance of these Optane Memory sticks sounds kinda low too. The enterprise Optane SSD apparently has 30x the endurance of standard solid state drives, but the two Optane Memory devices only have an endurance rating of six and three drive writes per day respectively.

Considering the 16GB option can be quickly filled if you’re sporting 16GB of memory each time you hibernate your machine that could potentially be reached pretty quickly if you’re carting it around in a laptop. Now we start to see why the demo machines Intel were displaying alongside their demos came with 16GB of Optane and 4GB of DDR4 system memory. 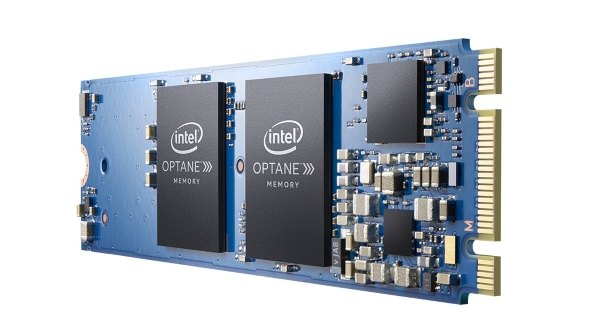 There’s also the fact that you can only run the Optane Memory devices with Windows 10 and on a 200-series Kaby Lake platform, which would mean a brand new machine. And if you’re speccing out a gaming PC without even a SATA SSD as the primary boot drive then I’d say you’re kinda doing it wrong.

Intel haven’t produced any performance numbers as to how Optane Memory performs against, or even alongside, solid state drives, so we’ll have to see how it compares if Intel decides to sample out the wee accelerators to reviewers.