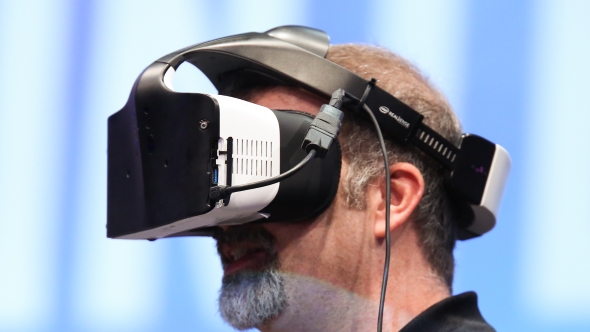 The Intel Developer Forum is in full swing in San Francisco this week – some things are happening outside Cologne, you know – and CEO Brian Krzanich took to the stage to show off their brand new untethered, all-in-one VR experience.

True VR’s going to take more GPU power than Project Alloy can possibly contain, so it’s still worth picking up the best graphics card for your budget.

This is where VR headsets really need to go in the future to make it a more palatable, less awkward experience overall. Right now the Vive and Rift are tethered to both a gaming PC and to the mains with a whole tangle of cabling.

Not only does it make you look like you’re being brain-humped by the lovechild of Cthulu and a headcrab, but it massively restricts your movement. And also increases the likelihood of tripping over face-first and permanently embedding your VR headset in your skull.

“It doesn’t feel very virtual when you’re tied to a confined space, you’re always having to go back, you have to leave it set up,” said Krzanich. “Project Alloy takes away the cord of the virtual reality headset.”

Intel’s Project Alloy is a completely self-contained unit, containing all the processing, tracking and power in one simple design. The battery pack is set at the back of the headband, balancing out the screens and computing unit at the front. And because it’s using Intel’s own RealSense camera – a pair of RealSense modules sit on the front of the device – you don’t need any kind of external tracking setup in the room. The cameras do all the depth-sensing processing themselves.

Intel haven’t shared exactly what the CPU technology is inside the Project Alloy headset, though given the size restrictions I doubt it’s going to be some six-core, 12-thread processing monster. Nor one with serious amounts of GPU power either.

Project Alloy is also part of Intel’s notion of merged reality, where virtual experiences can interact with the real world. Those RealSense cameras are absolutely key to this as they allow the real world to enter your virtual one – so you don’t kick the cat or trip over your TV when running around in-game. 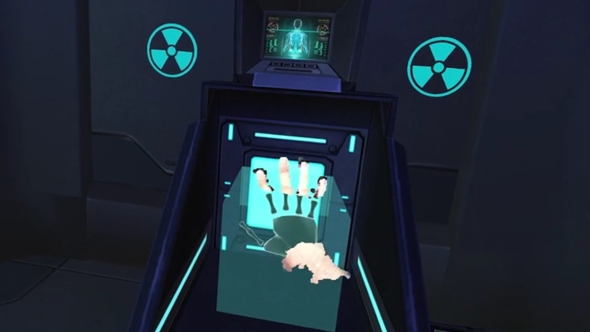 It also means you can use your hands as the controllers, and they will actually appear inside the virtual world. The cameras can track five digit motion of your hands, so devs will be able to overlay a virtual skin rather than the slightly ropey real-time output of RealSense imaging. You can then use your own hands to interact with the game world rather than use a tethered controller.

You can also bring real objects into the gameworld too – Intel’s demo guy pulled a fold of dollars from his pocket and used it to carve out a lump of gold on a virtual lathe. The possibilities are intriguing, your toy lightsaber could be tracked by Project Alloy’s cameras and rendered as a ‘real’ one in-game, for example. 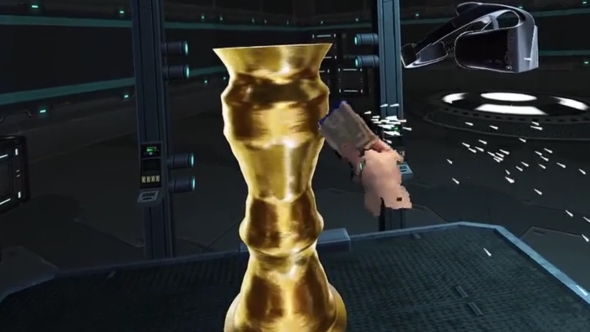 The promise of an untethered VR headset is a tantalising one, and exactly where the hardware needs to go for it to become as widely adopted as the likes of Valve, HTC and Rift want it to be. But the issue here is that as advanced as technology is getting there’s no way to get the sort of processing power – particularly graphical processing – you need to run intensive simulations at frame rates which don’t make you vomit.

But Intel are aware of this problem and freely admit Project Alloy isn’t going to suddenly replace Vive-class headsets. “Don’t get me wrong, that’s still a great setup if you want to do high-end gaming, low-latency super-jobs,” said Krzanich. “But for most things we want to do in VR that’s really a lot of work.”

Intel isn’t suddenly going to be manufacturing and selling its Project Alloy headset, however. They’re not getting into the system manufacturing game just yet. The device Intel have been showing off in San Francisco is just an example of what can be done with the sort of processing and tracking technologies they have been creating. Intel are though providing an open API for anyone wishing to use the Alloy model, meaning branded products based on the Alloy design could start to appear in 2017.