Intel is confident its ongoing CPU strategy to compete with AMD is going swimmingly – or, at the very least, the company is not “hitting the red panic button” just yet. Despite growing pressure from AMD’s Ryzen and EPYC processors to adapt its product stack or else run the risk of losing its stranglehold on the CPU market, over at the Citi Global Tech Conference Intel has confidently scoffed at any major deviations from its tried and trusted plan.

“We’re definitely not hitting the red panic button,” says Jason Grebe, CVP and GM of Cloud platforms and technology at Intel (via Seeking Alpha). “We’ve been in this business for multiple decades. We have fantastic customer relationships and we’re extremely deep with these customers on an engineering perspective. Obviously, there’s business choices that get made and we’re going to select what we choose, where we’re going to go deeper on some pricing issues and deeper on some product development issues.

“But at the end of the day, we’re really comfortable with where we’re at and we’re going to make every decision on a case-by-case basis. There’s not going to be some type of wholesale change in our strategy as we go forward.”

Intel is currently attempting to shrug off the impact of a 14nm manufacturing slowdown, a symptom of a wider issue in developing its 10nm process node. It has now launched some 10nm Ice Lake CPUs for mobile, but desktop is not expected to make the change for many more months, perhaps years.

AMD, on the other hand, is pressing forward with Ryzen 3000 and EPYC, built upon TSMC’s 7nm process node. Off the back of its EPYC processors’ touted total cost of ownership reductions, the red team has net itself business from major clients and OEMs such as Google, Twitter, Microsoft, HPE, Cray, and Dell. And it’s been scooping desktop market share and clout among gamers too, as even Intel admits.

“We want to aggressively compete in all segments,” Grebe says (via WCCFTech). “As we’ve gone through the supply issue kind of in the last six to 12 months on the PC side, we had to walk away from some low-end mobile share as well as some channel desktop share. But as we continue to improve our supply situation, we’ll continue to get more aggressive there.”

With the red team creeping onto Intel’s turf (although Intel still remains dominant in most markets, especially mobile), it’s perhaps surprising to many that the Intel’s taking a rather laissez-faire attitude to changes… or at least that’s the impression it hopes to exude to investors. 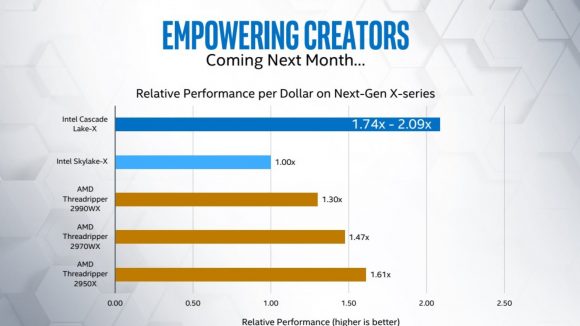 In reality, Intel actually looks to be changing its lineup quite a bit in the face of AMD’s renewed competitiveness. It’s impossible to correlate the exact cause and effect of one company’s actions on another, but let’s assume the reason we’re expected 10-core Comet Lake processors this year or early next isn’t just because Intel felt generous and likely instead thanks to AMD’s 12- and 16-core Ryzen 3000 chips.

Similarly, it’s also in the top-tier HEDT processors for professionals, content creators, and gamers that pricing has become a milestone around the neck of Intel’s offering. AMD Threadripper chips have been resolutely crushing Intel’s Skylake and Skylake Refresh Core X-series processors in terms of value. However, with Cascade Lake-X, coming this October, Intel has somehow increased performance per dollar some two times that of Skylake-X despite its major similarities in both architecture and process.

This likely represents a major pricing slash on the way for Intel’s Core X-series CPUs, and if that’s not hitting the big red panic button for a CPU company, I don’t know what is.

But at the very least Intel is now admitting there are “pricing issues” to be fixed – and that’s progress.