Intel’s Jim Keller says that if you think Moore’s Law is dead and you don’t believe in it “you’re a little delusional.” And to make sure that the technology world keeps kicking along with the pace it has done “we’re all building nanowires in the fab.”

This new design of transistor sees silicon moving beyond the 3D FinFET transistor design, which our graphics cards and CPUs have been running on since planar transistors died a death, and pushing into the Gate All Around (GAA) era. We’ve heard about Samsung’s plans for GAA design around the 3nm mark; it’s already given out the design kit for the upcoming process, making it sure look like Moore’s Law still has a few nodes left.

Keller has been giving his Moore’s Law Is Not Dead talk over at Berkeley this week, and the UC Berkeley EECS Events team has live streamed the entire thing over on YouTube and you can catch up on this fascinating, intimate little chat right now. And it basically boils down to a simple if you’re not prepared to let Moore’s Law die then it won’t.

“We had planar transistors, we went to FinFET,” says Keller. “We’re all building nanowires in the fab. Intel, TSMC, Samsung, everybody’s working on it. There’s a really interesting thing… while the world thinks Moore’s Law’s dead, the fabs and the technologists think it’s not and everybody’s announced now a 10-year roadmap for Moore’s Law.” 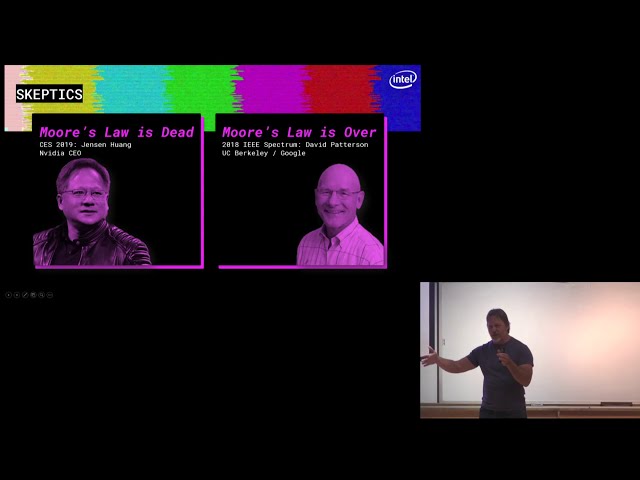 Keller also goes on to describe tasking his engineers with finding a pathway to 100x gate density. They came back all glum because they could only come up to 50x right now, so that’s what he’s going with…

They’ve got clear line of sight to pitch scaling of the eponymous fins of FinFet tech, delivering a 24nm fin pitch, which is about 3x. At this point Keller feels the need to explain that there are still shrinks that can be made, after all, the tip of the fins is still over 100 atoms wide.

“So we’re not running out of atoms,” he says. “We know how to print single layers of atoms… but the fins themselves, they’re mountains.” 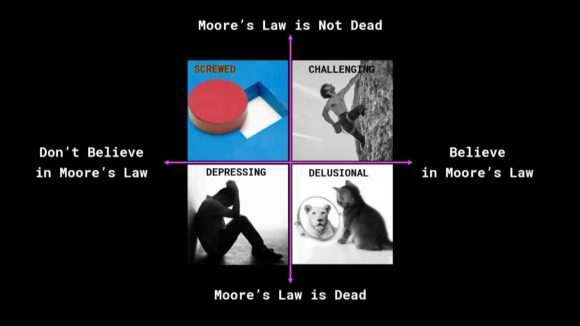 His point is that basically, Moore’s Law is not dead, because there’s a whole bunch of people invested in making sure it doesn’t happen. John Carmack sure as hell is a smart cookie, but he’s not necessarily at the leading edge of semiconductor technology development.

“If your idea set says this is going to keep going, and there’s a whole bunch of challenges, then I think we will rise to the challenge,” says Keller. “And I’ve seen that over and over. If you think it’s running out of gas, it will. If you think it’s not, it’s not going to. And there’s many people in the industry working on this.

“So many people have told me computer architecture can’t move any further. Really? How many times has it changed over the last thirty years? Like, over and over and over.”