Our NAND’s better than your NAND. That’s Intel’s message from its recent memory and storage event in South Korea, and is part of its reasoning behind the suggestion that its penta-level cell SSDs will be superior to the competition. If they ever see the light of day that is…

Penta-level cell (PLC) is the proposed follow up to the quad-level cell (QLC) memory being used today to drive down the cost of high-capacity SSDs. The only problem is that the low-cost/high-cap combo generally comes at the expense of storage speed and endurance. Slower performance and the increased likelihood of catastrophic data loss are pretty low down on the wishlist for future SSD tech, so there remains a question about whether PLC NAND will actually be a worthwhile investment. To be honest, I’m still not 100% convinced about the value of QLC yet…

So far, Toshiba is the only company that’s spoken about its work on the next generation of consumer NAND technology, and most of its efforts seem to be going in to mitigate the inherent failings of the push to store five bits per cell. But Intel’s convinced it’s already in a better place.

Toshiba has said that part of the problem is that reading PLC NAND accurately is a struggle, which is something Intel seems to be in agreement about. With 32 different voltage levels to store in a cell it becomes harder for an SSD controller to accurately read them all back, as the read window gets smaller and smaller. 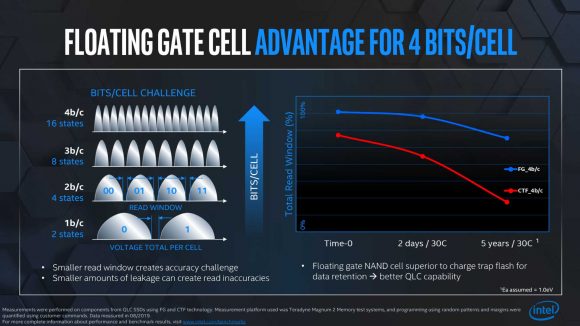 But Intel claims the way it constructs its memory means it’s better placed than its rivals to dominate the next generation of consumer SSDs. It uses floating gate cell manufacturing as opposed to charge trap flash, and it claims that, while it’s an advantage moving from single-level cell up to quad-level cell, it will also be vital as it moves forward into the five bits per cell future.

Charge trap flash is used by many NAND manufacturers in order to make production cheaper as it requires fewer process steps, smaller geometries, and higher yields, but Intel claims that over time its data retention capabilities drop off far more sharply than its own floating gate cell methodology. 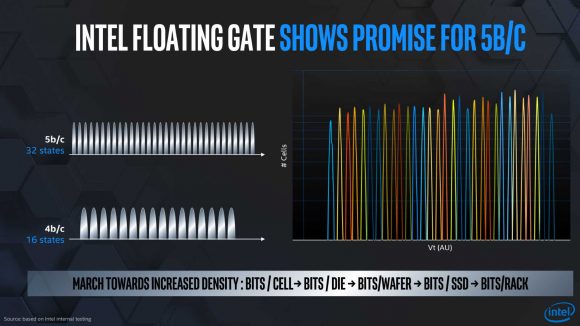 And with endurance a key concern for penta-level cell that advantage could be even more important for its next generation of low-cost, high-capacity consumer SSDs.

But Toshiba seems confident in its own ability to mitigate the issues with PLC NAND, may even be working on floating gate tech itself, and is even hoping the work it puts in for the future tech will come back to help increase the performance and endurance of its existing TLC and QLC technologies. Which will arguably be of more benefit than any potential mitigation of PLC’s failings.

Whatever happens, if penta-level cell SSDs actually become a thing, they’re going to have to be incredible cheap to be worthwhile.