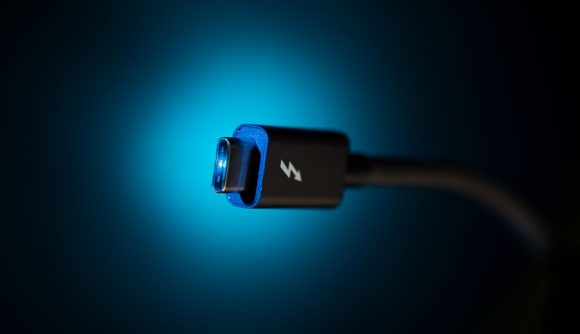 Intel’s long-awaited Thunderbolt 4 has now been revealed and its specification detailed. In a press release the company says this next generation of the connectivity standard will deliver “increased minimum performance requirements, expanded capabilities, and USB4 specification compliance”.

Intel also says Thunderbolt 4 offers “universal connectivity for everyone”. However, part of the new standard specifies  “required Intel VT-d based DMA protection” – in other words, for a microcontroller to be considered Thunderbolt 4, it looks like it will have to use Intel’s own memory access protection technology.

Thunderbolt connectivity lets you run not only multiple data streams but also power streams through a single cable with a USB-C connector. This lets you have one small docking station to power and transfer data to and from multiple devices – and the cables are quite thin, too, so it can help keep things neat and tidy. It also acts to standardise and centralise connectivity. This 4th generation of the standard doesn’t increase throughput over the 3rd, however, and remains at 40Gbps.

In fact, USB4 also supports 40Gbps transfer speeds but doesn’t require it. Thunderbolt 4 does require it, though. This is what Intel means by “minimum PC requirements” in each instance: for something to be considered Thunderbolt 4, it has to support these things at a minimum. For instance, on the face of it, Thunderbolt 4 “requires” two 4K displays, but this simply means that a Thunderbolt 4 device must be capable of supporting two 4K displays at minimum. 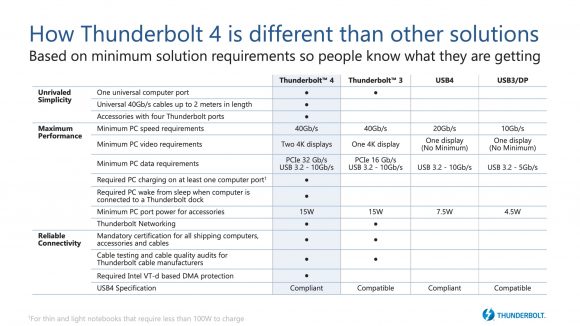 Intel says “Thunderbolt 4 builds on the innovation of Thunderbolt 3 for a truly universal cable connectivity experience. Thunderbolt 4 always delivers 40Gbps speeds and data, video and power over a single connection. It is the most comprehensive Thunderbolt specification yet with compliance across the broadest set of industry-standard specifications – including USB4, DisplayPort and PCI Express (PCIe) – and is fully compatible with prior generations of Thunderbolt and USB products.”

Analysis: We don’t know whether Thunderbolt 4 will require Intel hardware

Intel has historically held on pretty tightly to its Thunderbolt specifications, but last year it handed its Thunderbolt 3 specification over to the USB Implementers Forum (USB-IF) so that the industry could freely adopt its standard. From there it’s simply been a matter of paying a one-time fee of an undisclosed amount to Intel to become Intel-certified, and we saw the first official Intel blessing of an AMD Thunderbolt 3 product in February this year.