It looks like Intel is going to ship 10nm gaming processors in mobile form before we get anywhere near 10nm desktop CPUs. A new EEC registration document shows that Intel’s Tiger Lake-H platform is starting to get into the hands of system developers in preparation for a whole new generation of 10nm gaming laptops.

The standard Tiger Lake processors, the low-power mobile successors to the current 10th Gen Ice Lake CPUs, have moved into the beta phase of testing out with their respective laptop manufacturers. That likely means we’ll see Tiger Lake machines in production for the lucrative back-to-school market around September and that Computex is going to lousy with Tiger Lake laptops ahead of launch.

But the Tiger Lake-H chips would be the high-end processors designed with large TDPs, high turbo frequencies, and chunky core counts. Well, if they’re following the Intel H-series traditions anyways. Tiger Lake-H is in the alpha phase of developer testing, after reference board layout files were published earlier this month. That puts it behind the standard Tiger Lake mobile processors, and likely set for release either right at the end of the year or the beginning of 2021. Maybe a CES 2021 launch?

Before that we’ve got the high-end 10th Gen Comet Lake-H chips set for launch in the first half of this year, manufacturing dependent, which will see our gaming laptops getting their powerful graphics silicon paired up with 14nm CPUs once more. Though there’s at least the chance Intel might squeeze all ten cores of Comet Lake into a laptop spec for a little numerical advantage over AMD for a change. 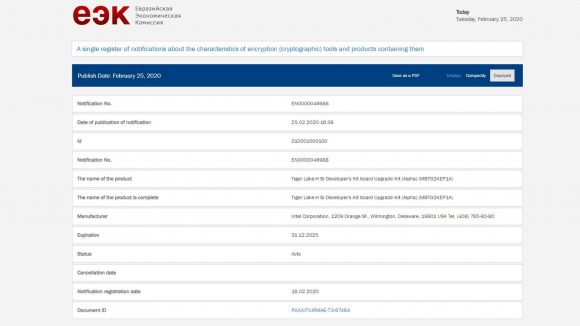 But Intel’s Tiger Lake-H will be the first time we’ll see the 10nm process given a heap of power and hopefully hefty, sustained clock speeds too. The H-series processors have traditionally been 45W parts and been capable of hitting impressively high frequencies to compliment the discrete GPUs they’re normally paired with in gaming laptops.

The fact that Intel is starting to get manufacturers ready for high-end 10nm processors is reassuring and should mean that the Willow Cove architecture and the 10nm++ process is robust enough to take both high core-counts, high frequencies, and a whole lot more voltage than either Cannonlake’s 10nm or Ice Lake’s 10nm+ nodes have been able to cope with.

Sadly though, despite the fact that a 45W mobile processor would be getting awfully close to desktop specifications, it doesn’t look like we’re going to get a Tiger Lake-S series of desktop chips to worry the best CPU for gaming lists. There is still yet another 14nm generation set to drop ahead of the first 10nm desktop processors – namely Rocket Lake-S.

The speculation is that 2021 desktop processor range – the 11th Gen I presume – will feature the same Willow Cove core design as Tiger Lake, but potentially backported from 10nm to the 14nm process.

And what of the Intel Xe graphics silicon that’s set to be part of Tiger Lake and beyond? Well, the U-series Tiger Lake CPUs are set to be the chips housing the highest spec versions of the Xe GPU. Those are the 96 EU parts, expected to be sometimes be paired with the DG1 graphics card in mobile form. I wouldn’t expect the Tiger Lake-H processors to have much more than a nominal Xe GPU inside them if they’re going to be paired with serious AMD or Nvidia graphics cards.

Though some have speculated that maybe Intel will launch the Tiger Lake-H chips simply in the lower echelons of the 11th Gen H-series and have another line of high-powered 14nm mobile processors taken care of the serious 45W gaming business. Okay, Jacob has speculated, but who knows he might be right, sometimes Intel makes some bizarre intra-generational decisions…