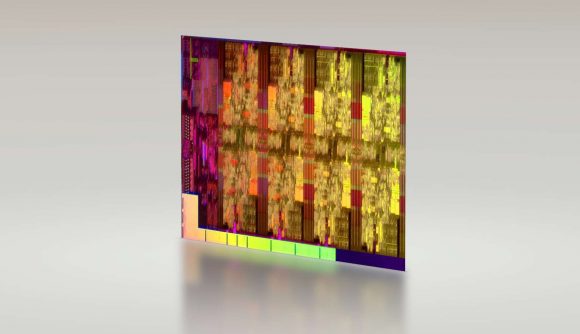 Intel’s 10nm Ice Lake processors have only just started making an appearance in today’s laptops, but already we’re seeing benchmarks appear with the next-gen Tiger Lake CPUs front and centre. With 50% extra execution units the Gen12 GPU at the heart of next year’s 10nm processors will reportedly offer twice the current gaming performance of even the Iris Plus silicon providing the gaming grunt of Ice Lake.

The Intel Developer Conference in Tokyo has provided a few more tantalising details about next year’s processor developments and maybe a little extra morsel about the Xe graphics silicon that will finally arrive in 2020. Though the main thrust has been about proving the gaming performance of its 10th Gen Ice Lake, showing the frame rate uplift on the latest esports titles moving from the Gen9.5 to the Gen11 graphics.

For the most part – ignoring CS:GO – you’re looking at gaming performance around the 30fps mark. In itself that’s pretty damned impressive for a low-power 10nm CPU, however ‘extra’ Ice Lake’s Iris Plus graphics silicon is.

According to a report on MyNavi.jp, however, the next generation of integrated Intel graphics will be chasing down the 60fps target, with Tiger Lake attempting to offer twice the gaming pace of Ice Lake. The integrated Gen12 GPU in the next generation of processors may also bear the Intel Xe moniker, and if it’s looking at doubling the frame rate of Gen11 with just another 50% extra execution units inside the GPU then it must surely have something else about it other than just being a bigger version of Ice Lake’s graphics silicon.

And if the integrated graphics versions of the Xe GPUs are going to be capable of offering 60fps at 1080p, then that bodes well for the discrete parts too.

The Gen12 GPU has already popped up in the CompuBench database, showing a GPU with 96 EUs and a maximum clock speed of 1,000MHz. As usual there’s nothing that can be extrapolated from the entry in terms of performance, but taking the comments from Kenichiro Yasuo, GM of Intel’s engineering division, this should be the silicon offering twice the performance of the 64 EU Ice Lake chips.

It is worth mentioning that there might be a little confusion over what’s going to be called Gen12 graphics and what’s actually going to be denoted as an Intel Xe GPU. Intel has previously shown slides presenting its graphics generations shifting from Gen9 to Gen11 and then onto Xe, but the continuing references to Gen12 and separately to Intel Xe do make me wonder whether they might be separate things.

That said, Intel has promised that its Xe GPUs will form the basis of integrated, mid-range, enthusiast, and datacentre graphics silicon going forward, so it could just be another classic bit of Intel marketing confusion. I mean, why not have multiple brand names for the same thing…