The announcement of Intel’s Graphics Command Center (IGCC) as an update to its older, blander control panel came almost a year ago during GDC 2019. Since then, IGCC has entered beta and made graphics settings much easier to understand and change. Now, Intel has added capture and streaming features to its software – and just in time for Intel Xe.

Intel’s goal for IGCC, in its own words, is to rebuild it from the ground up “with gamers in mind” by “making things much easier to discover” and “including more helpful education information into the software, so people can more easily find out what settings do.” In other words, take the boring, over-complicated Intel control panel and turn it into something resembling AMD’s Adrenalin 2020 or Nvidia’s GeForce Experience (yeah alright, those are my words, not Intel’s).

With this recent addition of capture and streaming features to IGCC, it looks like Intel is heading the right way towards achieving this goal. It seems like something that people actually want, too. Community engagement and feedback is something that Intel actively strives for – with the announcement of Intel Odyssey last year, for example.

It was only one month ago that Intel hosted an ‘Ask You Anything’ (AYA) on Reddit, where it asked for audience feedback on key topics. Nvidia Shadowplay and AMD Relive are two very popular features in Nvidia and AMD’s respective graphics card software, allowing users to capture, share and stream gameplay without the use of an external application. Intel adding these features to its IGCC highlights its move towards gaming-oriented graphics and taking its driver package seriously. 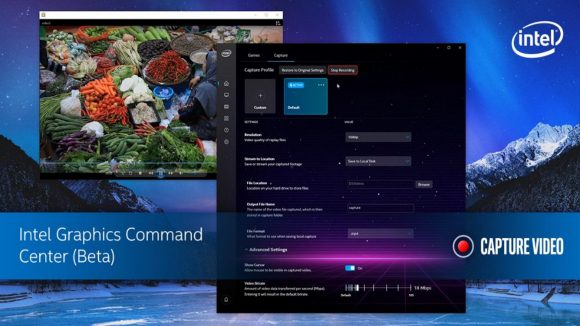 Yes, I’m talking about Intel Xe. It’s not likely to be a coincidence that Intel is taking inspiration from gaming-oriented graphics software like Shadowplay and Relive considering its upcoming DG1 GPU. Intel will want Xe to have memory foam backrest level of support upon launch, and getting gamers onside through its software features is a great way to achieve this.

Intel Xe really could do with the support these features might garner, too. With AMD’s ‘Big Navi’ release date looming ever closer, and with Nvidia Ampere (or is it Hopper?) GPUs probably set for release no earlier than September 2020, Intel Xe dGPUs might end up hitting the market smack-bang between the two.

For Intel’s first proper foray into the discrete graphics card industry, this launch date adds a lot of pressure. It potentially gives them the worst of both worlds – being compared with a new, shiny AMD GPU on release, and being overshadowed by next-gen Nvidia GPUs after the Big Navi hype settles down.

While IGCC’s broadcast feature is only currently in testing, I have a sneaking suspicion that Intel will want it ready for Intel Xe’s release date. Which will be soon, hopefully.