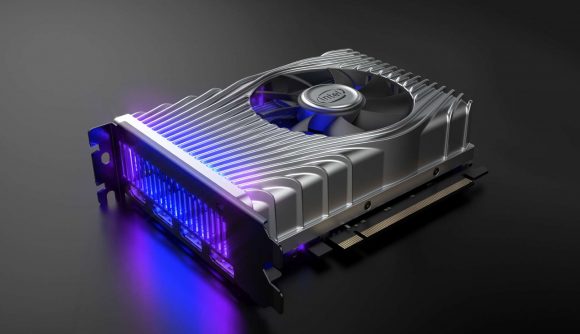 Intel’s Xe GPU is the company’s first proper foray into discrete graphics, not counting its ill-fated Larrabee project. A recent leak, however, points towards this GPU only being intended for the laptop and mobile market, not for the desktop one. At least not yet, anyway.

We’ve seen a few glimpses of Intel’s latest graphics project already, as Xe was shipped out as a software development vehicle (SDV) to developers and had its public debut at CES 2020. In all cases our glimpses have been of a PCIe dGPU like those you find in your average gaming PC.

A newly leaked slide from Argonne National Laboratory (via TechPowerUp), however, states that the Xe chip “will be used in laptops with the GPU integrated onto the motherboard” and that the “PCIe form factor is only for the SDV, and not a product”. Seemingly, then, there will be no new competitor in 2020’s desktop gaming GPU market segment, as many starry-eyed idealists might have hoped for.

It makes sense to ship GPUs to developers in the form of a discrete PCIe card as this allows them more control over how to implement the GPU for testing. But while it has always been made clear by Intel that the PCIe Xe cards we’ve seen so far are only SDV products and will not be for consumer use, it has until now always seemed plausible that some Xe products might ship as PCIe dGPUs for desktop.

memo.
Intel Discrete Graphics 1 (DG1) : *PCIe Form factor is only for the SDV and not a product.
*Chip will be used in laptops in GPU integrated on to the motherboard.

A mid- to late-2020 Intel Xe release date has seemed the most likely time frame for a while now, and as more and more listings and leaks have been uncovered, it’s been hard to deny the strong whiff of impending release. No official word on a release date from Intel itself, though.

The latest listing uncovered (via Guru3D) is a Sandra one that shows what is most likely an Intel Xe GPU hosting 768 shader cores across 96 execution units (EUs), 3GB memory, and 1MB of L2 cache, putting it somewhere in the range of lower entry-level Nvidia or AMD consumer gaming GPUs.

We’ve also seen how an SDV Intel Xe DG1-LP GPU (the LP demarcating its low power variant) performs in the wild at CES 2020 when it ran Destiny 2 and struggled its way through Warframe. It only managed to get 30fps on low at 1080p in Warframe, but reminders that this was only a SDV model and that Intel Xe would get further refinements kept us gamers hoping.

But if this recently leaked slide is legit, Intel Xe is becoming a little less exciting for PC gamers. This on top of the fact that Intel seems to be angling for Xe-HP (high performance) GPUs as options for datacentres rather than consumers. With Xe-LP not performing too well in games at CES 2020, Xe-HP seeming more targetted at datacentres, and now Xe dGPUs seeming destined only for the laptop market, Intel Xe doesn’t seem like something PC gamers should hold our breaths for, at least in 2020.

We can still be excited about other aspects of Intel Xe, however. Most importantly, if 2020 (or even 2021) doesn’t bring another player to the mainstream PC gaming GPU scene, it might at least lay the groundwork for it happening in the future.