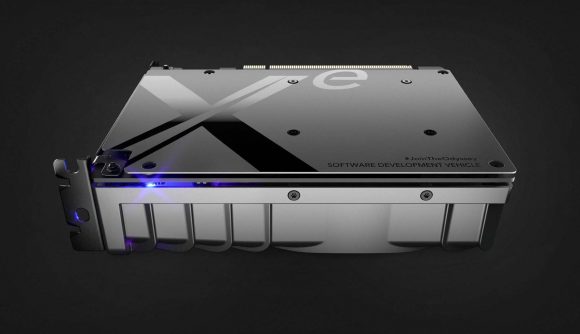 Intel Xe is the name of the company’s upcoming family of GPU products, from discrete graphics cards to the integrated graphics of Tiger Lake APUs. Raja Koduri, Intel’s chief architect, has never been shy when it comes to sharing photos of Xe products – In February, he tweeted himself holding up a “fresh wafer” with a giant ‘X’ plastered on the casing, undoubtedly an Intel Xe wafer.

Now, Koduri has tweeted another picture showing off what looks like three Xe products alongside an AA battery for size comparison. While the tweet doesn’t say exactly what these products are and will be used for, we can make some educated guesses.

The GPU on the left looks like the same one that Intel Graphics tweeted almost a month ago. This is Xe-HP, a ‘high-end but not quite HPC’ GPU. The large chip on the bottom right is probably what Raja is referring to when he says “big ‘fabulous’ package”, and VideoCardz speculates that this device is likely a look at a discrete Xe-HPC Arctic Sound GPU.

It’s not unreasonable to believe that this giant Arctic Sound GPU is actually Ponte Vecchio, a 7nm part expected to launch in 2021 and to be used as part of the Aurora Supercomputer for the US Department of Energy and Argonne National Laboratory.

That only leaves the chip on the top right, which is of most interest to us gamers. This chip is most probably Intel DG1 or DG2, these being discrete GPUs made for consumers and possibly OEMs. In other words, the ones you’d probably whack inside a budget gaming PC.

Analysis: It might be a while before we see a truly great Xe gaming GPU

I say “budget” gaming PC because all real-world Intel Xe performance indicators, at least so far, have pointed toward the GPUs, whether discrete or integrated, being decent for gaming on a budget but not so great for high-end gaming. It might take some successive generations for Intel’s graphics platform to become a true contender for mainstream gaming builds.

This isn’t to sound all doom and gloom, though. It’s incredibly exciting to have another player in the GPU game, especially when we have Intel showing a Xe-powered Tiger Lake laptop running Battlefield 5 on high settings at 30fps. This is already better performance than what we saw from Xe at CES 2020, and there are more improvements yet to be made, especially considering drivers and software optimisations won’t be anywhere near final at this point.

However directly beneficial this first generation of Intel Xe ends up being for PC gamers, there’s no doubt it will be indirectly beneficial. You know, the whole ‘rising tide to raise all boats’ thing? And seeing these three Xe GPUs packaged next to each other, it really does tickle the eager bone, doesn’t it?