I’ve been up in space again, flitting around nebulae and solar systems in my fancy future ships. It’s Interstellaria that’s dragged me back up to the heavens, a fleet and crew management game that, at first glance, is evocative of FTL and Starbound, but is really all about managing a group of mentally subnormal space people with terrible tools.

Interstellaria might be a victim of developer Coldrice’s ambition. It’s so many different things, Frankenstein’s monster made out of different videogame genres and systems that never quite fit together. And that’s an awful shame because the pitch is a great one.

You’re a solitary space person, a new captain and member of Trade Co, an ambiguous commercial entity that might as well be an Adventurer’s Guild. There’s a whole galaxy out there, waiting to be explored, where you can get into space scraps with other ships, go on away missions to meet new races, pillage planets for their lovely raw materials and meander through a disjointed main story that bears a striking resemblance to the plot of Mass Effect 2. 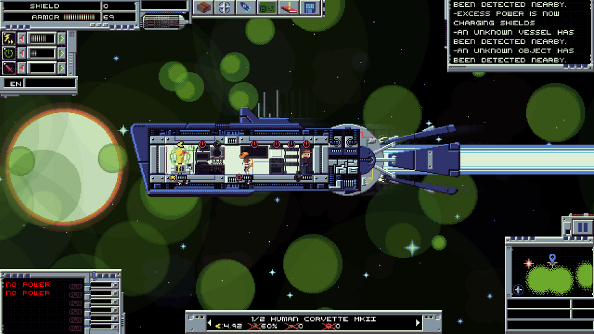 Rather quickly, that one solitary space person becomes a dozen, spread across different ships in your fleet, from nimble fighters to huge, multi-level cruisers. A whole armada to manage and a galaxy to play in –it all sounds absolutely lovely.

Not one element of this RPG/sim/sandbox is particularly strong. In fact, most of them are downright frustrating, half-baked and a little bit broken. They might start with a good idea, a promising embryo that lamentably grows into a dysfunctional teen in the blink of an eye.

Frustration begins right away with the interface. Interstellaria is cursed with an absolutely terrible UI and awful controls. Cumbersome, hard to read, buggy –there’s nothing good about it. It’s just a confusing mess. Take the mission journal, for instance. After clicking on it, there’s no journal. No information about missions or the story at all. There is only a third inventory, full of quest items with vague descriptions. 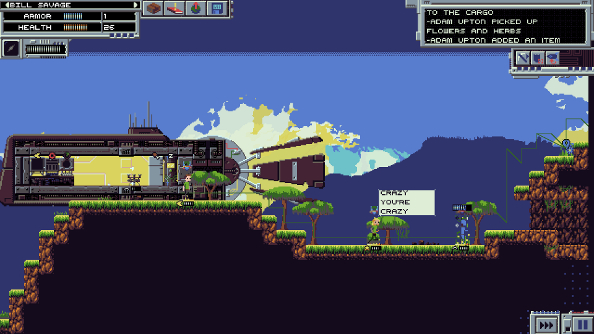 There is so much faffing.

None of these arbitrary restrictions serve a purpose beyond making it much harder to manage the crew and your fleets. It’s just unnecessary obfuscation. And god forbid you bother to investigate what you’re carrying in your inventory. There’s no consistency in the information.

One gun might have a description that reveals how much damage it does, but some don’t. Some item descriptions cut off mid-sentence. Items that aren’t weapons might have accompanying icons that denote them as weapons. It’s exhausting. 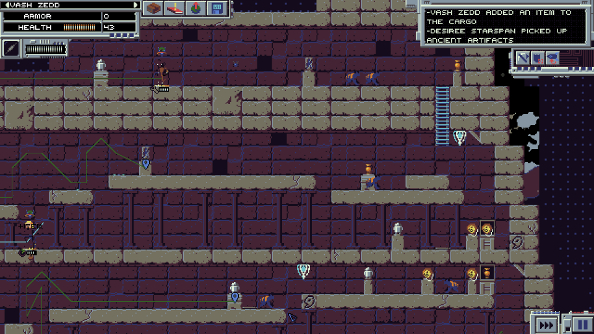 These problems worm their way into every aspect of the game, souring everything. They reach their zenith, however, when you’re trying to control your many crew members.

Whether in space or on a planet, you have full control over every crew member, across the whole fleet. And it’s a micromanagement nightmare. All of these tiny pixelated people love to all stand in exactly the same spot. Early on, the ships are tiny, so I guess I can’t blame them. But this makes even selecting them a tedious chore. When you click on this mass of people, you might get the dinosaur alien at the front, or you might get the captain at the back. You won’t know who you’ve selected until you move them, though, because their name and health bar won’t appear on the screen. Unless you’re on a planet.

Imagine this, but spread across five ships. In the middle of a battle.

It’s not quite as bad on away missions. There’s more room, you can see what character you’ve selected, and all the crew members that you want to control are in one place. It’s worth mentioning, however, that there’s no away mission roster or anything like that, and only one ship actually lands on the planet. If you want to include crew members from other ships, you need to go to the fleet management menu, select the crew individually, and drag them over to the other ship. In Interstellaria, there’s always more room for needless micromanagement. 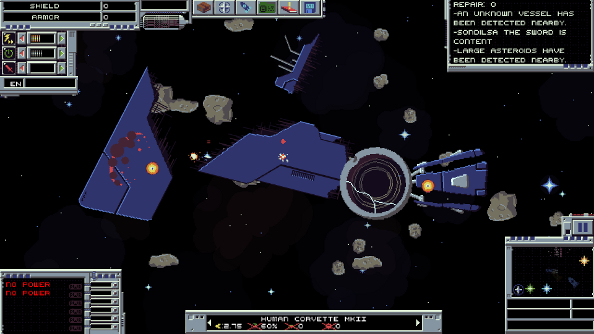 So! You’ve done all of that, and you’re on the planet’s surface. There are lots of biomes, trade settlements, ancient ruins and futuristic facilities that can be explored from the get go and, visually, they are a fun bunch of holiday spots. They’re bright, colourful, fat with stuff to squeeze into your inventory. The crew can fight, chat with the locals and gather resources, and it’s all simple enough. Hit “H” and all selected crew members will just start harvesting resources automatically. You can even speed up time so there’s less waiting around.

Automation!? Convenience!? Interstellaria almost seems to turn over a new leaf when you get out of space, ignoring the ever present inventory bullshit. And these little excursions would be great wee adventures if it wasn’t for two rather large issues: your crew are idiots and away mission adventures soon become extremely repetitive.

You see, you can’t just tell your crew to harvest stuff and let them get on with it. They need constant supervision. If they spot an enemy, instead of running away (enemies just ignore you most of the time), they’ll attack it. That’s fine, because with armour and a gun, few things can threaten your crew. But if they do get in over their head, they are screwed, and their chums won’t help. Well, sometimes they will. Sometimes they’ll just wander right past and ignore the firefight. 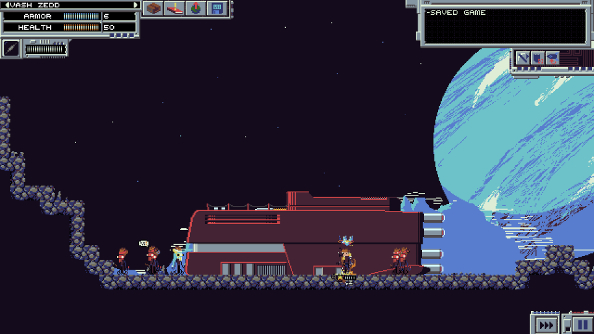 So what you really need to do is tediously gather up all of your crew and then walk them through the area, eradicating all enemies. You just click on the monster and wait for your crew to kill it. That’s all you do. Even if the monster is a boss. But with that done, it’s time to just automate them and let them gather up the resources, right? You would think that, but remember, these are very stupid space people. What actually happens is they’ll get stuck in a loop, jumping between ledges, or they’ll walk into a locked door because the pathfinding is terrible and sometimes, for no reason at all, they’ll just stop.

It’s a shame, because when it works, I find the away missions to be a relaxing diversion. I sit back, listen to Chipzel’s superb soundtrack and admire the striking pixel art. And I’m driven to go to these planets, because the resources can be worth a fortune.

Trade is where you’ll make most of your dosh, which you’ll need a lot of to outfit your crew and ships and even buy new ships from alien races. There’s not much to it, though. Interstellaria’s galaxy is not really simulated. Random events can happen in the journey between worlds, like finding escape pods or asteroids that you can mine, and there are the fights too, though we’ll save those for later. But generally, it’s a lifeless, unchanging place, the economy included. 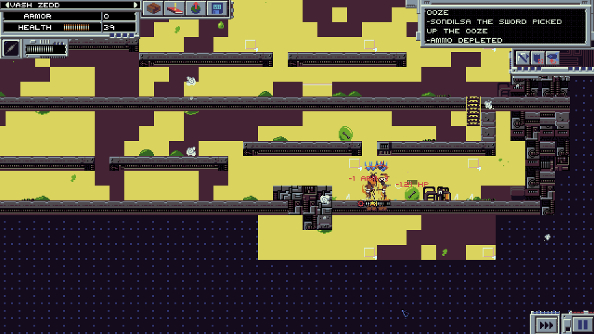 Certain worlds will have an abundance of one resource, which they’ll sell at a discount, and a need for another resource, which they’ll shower you with riches for. This never changes. The Trade Co HQ, for example, will always pay a lot for scrap and dynium (the raw mineral form of the galaxy’s currency) and they will never stop wanting those things. You can flood the market and make no impact.

Part of the way through the game, a new set of worlds unlocked not far from Trade Co HQ, and it just so happened that one of them had an abundance of much desired resource back at HQ. From that point on, I never had to worry about money. In 10 minutes, I could make enough to buy the most expensive ship in the game.

This all seems a bit poorly thought out, but actually it was a relief. I’d been going on longer trading missions before these new planets unlocked, and I needed a break. Even travelling through space for few minutes can be tiring. It’s like a very long load screen interrupted by the occasional, avoidable battle.

When space combat does kick off, it does so in the form of a minigame. It’s not a very good minigame, but it’s not particularly terrible either. A small screen pops up, showing a 2D battlefield, with ships moving and firing in real time. You move your ship around the plane, avoiding the missiles and other projectiles, trying not to bang into asteroids. 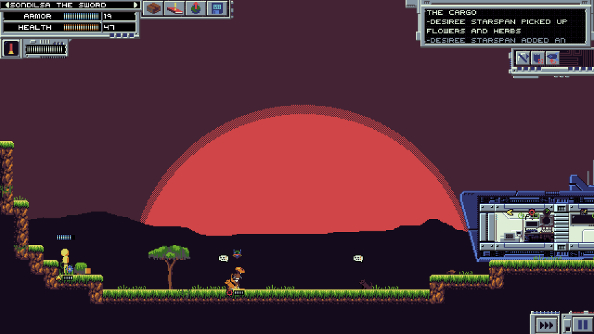 As all this goes on, you’ve also got to manage your crew and your ship’s interior, making sure that all the stations are manned and energy levels are where they should be. You’ll need to power up and turn on weapons, send crew to their stations (navigation to keep the ship moving, tactical to fire weapons), and repair any damage.

It starts to get a bit hairy when you throw a few more ships into the mix. I spent far too long squinting at the screen to try and get yet another crew member to fix the hole in the hull or a broken station while another ship was on fire. These battles could be quite a lot of fun and properly tense, given crew permadeath and just how quickly a ship can be destroyed, but once again it’s all ruined by just how crap the UI is. You’ll spend more time fighting the controls and interface than you will actual enemies.

I put up with all of this because, frankly, it’s just nice to fly across the galaxy with my own fleet. I mean, my command vessel is a huge biodome that just glides through space. It’s got a tree! It’s wonderful. But Interstellaria really lost me with the story missions – the whole impetus for this slightly shambolic misadventure. 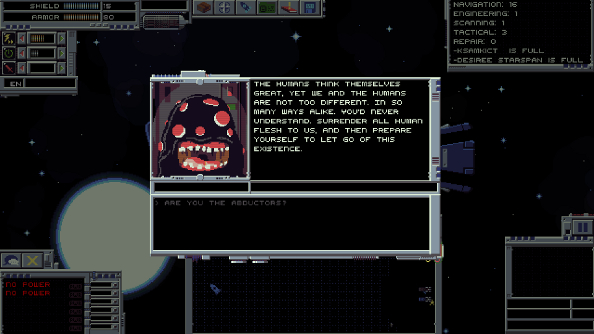 So there are black blobs, right? And they are kidnapping humans. You’ve got to stop them. Lamentably, you do this by mostly going to planets and asking people for more information. They’ll always have a series of terrible tasks, of course. Tasks that send you back to places you’ve already been to, sometimes for the same items you’ve just collected elsewhere, and you’re never given all of the quests. No, you’ll need to do one, come back to the mission giver, get given the next one and then return to the place you were just hanging about in five minutes ago. And the reward for all this hassle? Go do the same thing all over again on another planet.

The plot has a few twists and turns but is already fast fading from memory, along with any of the paper thin characters I met along the way. Even my crew, who I’ve formed an attachment to simply because I gave them names, are a pretty boring bunch, cripplingly anti-social and perhaps even blind and deaf, because they don’t seem to notice any of their colleagues.

Ultimately, there just isn’t anything that Interstellaria does remotely well, beyond the cracking soundtrack. Even the pixel art, which looks lovely, ends up being impractical, making it difficult to quickly spot what’s going on. It’s not a good RPG, being absent any real characters or meaningful decisions; it’s s poor sim, set as it is in an unchanging galaxy; and it’s a rather dull sandbox, only offering the illusion of openness while actually being quite linear. And despite a stint in Early Access, it remains quite buggy.