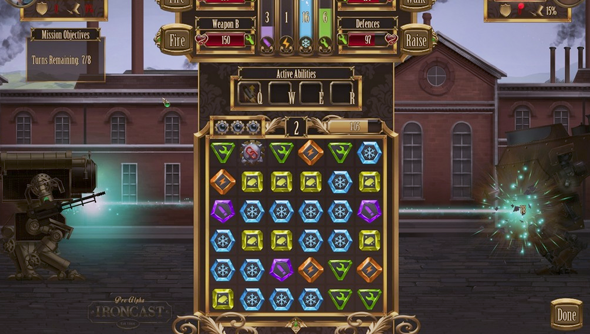 Just take a look at the trailer and see for yourself.

Set in an alternate universe where, instead of investing in pleasure gardens, Victorian ladies and gents spent their inheritance on building steampowered battle mechs, Ironcast has you defend England from invasion.

Each battle sees you charging up your war machine’s weapons by matching chains of gems and attempting to blast your enemy into little pieces. Success means more than just victory for England, each win means a pile of scrap metals to salvage. You’ll be swapping out weapons and defense mechanisms on your 7-metre tall mech with those of your defeated enemies.

Developer Dreadbit raised the £10,000 they needed to finish development of Irconcast back in September, 2014 via Kickstarter. Even though they didn’t raise enough for their stretch goals, Dreadbit were picked up by publisher Ripstone and funded enough to develop them anyway. There’s an extra commander to play as, as well as an additional mech to pilot, and a stack of new missions and abilities.

Ripstone plan to have Ironcast launch lurch onto Steam later this month.