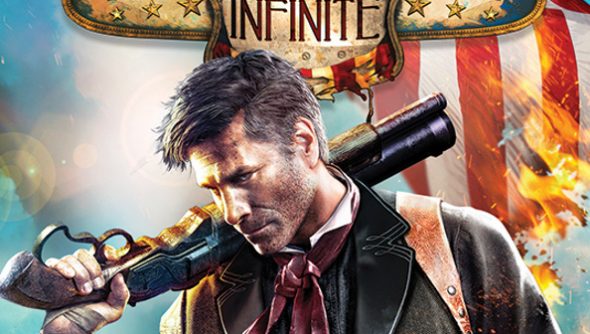 I suspect you will not be basing your decision about whether to purchase Bioshock: Infinite on its cover art. In fact, I doubt that anyone with strong feelings about Infinite’s cover art is really the intended audience of that admittedly underwhelming image: a chiseled and grizzled white protagonist with a shotgun resting over one shoulder glowering, purse-lipped, at something below, while an American flag burns behind him.

The point of that cover, Levine told Wired’s Chris Kohler, is that it can appeal to more casual, “frat guy” type gamers. “By the time you get to the store, or see an ad, the BioShock fan knows about the game. The money we’re spending on PR, the conversations with games journalists — that’s for the fans. For the people who aren’t informed, that’s who the box art is for.”

It’s a fair point. It’s debatable how relevant the cover art and retail copies are to PC gamers in general. How many of us really browse a retail store any more for our next purchase, when the best prices and by far the greatest convenience are likely to be had online? I doubt I will see the cover more than a handful of times before I click “buy” and never again encounter the game’s public face, it’s final pitch to the audience.

As Levine made clear, Irrational and 2K were concerned about that last-chance first-impression. “I wanted the uninformed, the person who doesn’t read IGN… to pick up the box and say, okay, this looks kind of cool, let me turn it over. Oh, a flying city. Look at this girl, Elizabeth on the back. Look at that creature. And start to read about it, start to think about it,” he said.

“I understand that our fan says, that’s great Ken, what’s in it for me?” Levine admitted. “One, we need to be successful to make these types of games, and I think it’s important, and I think the cover is a small price for the hardcore gamer to pay.”

He also stressed that the box cover will not be the only cover, and promised a range of printable custom covers.

The trouble for Irrational is that box art is also read as a promise, an expression of intent, and Irrational are held to a higher standard. By those lights, it’s hard not to see Infinite’s box art as a let-down. Of all the interesting themes and locations in play in Infinite, a man with a gun is probably the least exciting thing you could pull from that game and slap on a box cover. Kotaku’s Owen Good put his finger on why people were so disappointed with this particular cover when he wrote: “If BioShock Infinite’s cover is an accurate snapshot of what this game is on the day of release, then its devoted fans are right to suspect what’s inside is corrupted by mass marketing and movie-hero FPS clichés.”

On the other hand, that’s hardly a problem unique to Bioshock: Infinite. There has never been a Golden Age of Videogame Box Art. Thief: The Dark Project features a man in the shadows with a bow and arrow. Crusader: No Remorse is a man in armor with an explosion behind him. Company of Heroes has soldiers brandishing rifles. Great games, even masterpieces, rarely announce themselves through their box art.

The truth is, what makes most games appealing is hard to convey in an image. If you look at this collection of high-concept fan covers for popular games, you’ll find a lot of great and memorably covers… if you already know what they’re referring to. If you don’t, they’re enigmatic images and nonsense words, as likely to mystify as to intrigue.

Still, It would have been nice for more of Bioshock: Infinite’s setting and themes make their way to the front of the box. As understandable as Levine and 2K’s reasoning is, it’s also frustrating to see how how much the industry caters to this idea of a stereotypical gamer who doesn’t actually care about games.

The cover’s message might be intended for one group of gamers, but it still carries its own meaning to other audiences. Levine is right that a cover is “small price to pay” to help a great game find a wider audience. But if fans and hardcore gamers seem uneasy, it’s because they know that payment rarely ever stops at the box art.

Disclosure: A family member has done a small amount ofpaid consulting work for Irrational over the last two years.