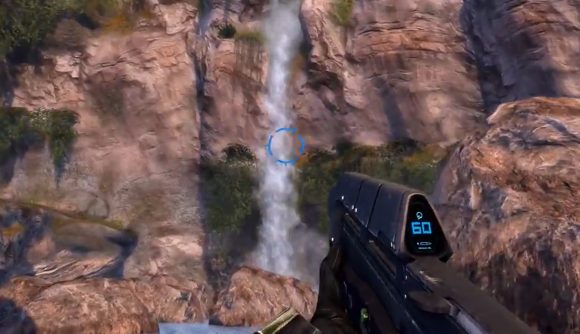 When I’m looking to start a new videogame, there’s one thing I need to know: is there a dog, and can I pet it? Okay, so maybe that’s two things, but either way the next question quickly follows: is there a waterfall, and is there a secret behind it? Luckily for all of us, the creator of gaming’s most beloved Twitter account is back to ensure we have answers to both sets of questions.

Yes, the person behind ‘Can You Pet the Dog?‘ has launched ‘Is Something Behind the Waterfall?’ It’s a similar cataloguing effort on Twitter, featuring several posts each day with descriptions and brief video clips of digital waterfalls and the secrets contained just behind their watery facades.

The account’s first tweet comes from The Legend of Zelda: Breath of the Wild, showcasing the Dow Na’eh Shrine hidden behind a waterfall. Breath of the Wild was also the subject of CYPTD’s first tweet, though the results then were less positive – you could not, and still cannot, pet the dog in Zelda’s take on open-world games.

It’s been one year since Can You Pet the Dog launched, and in that time the account has drawn nearly 400,000 followers.

I have started a new account based on one of my most popular requests: @VGWaterfalls tracks video games that have waterfalls with secrets behind them. https://t.co/wCraf7DGR1

I imagine the waterfall-based equivalent will have a harder time gaining traction without the benefits of cute little fuzz-buddies, but my fellow gamers know the struggle of needing to check behind every single waterfall. (Just in case.)