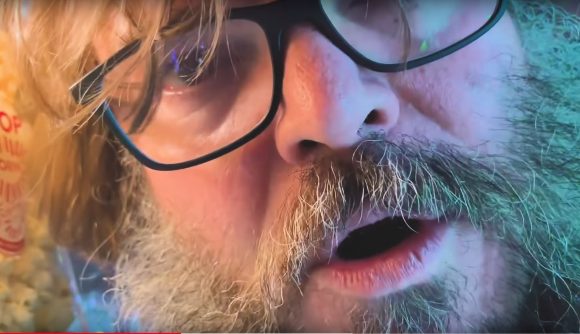 As 2018 wound to a close, we learned that Jack Black is going to be making gaming videos. From the sounds of things then, it seemed like the Brutal Legend star was going to be jumping straight into the deep end, taking on YouTube juggernauts like Ninja and Fortnite. But now it looks as though he’s decided to start things out a bit more old school.

The first proper video on Black’s channel, Jablinski, documents his trip to the Pinball Hall of Fame in Las Vegas. This is a 10,000 square foot facility housing pinball tables dating back to the 1930s and beyond, and even includes machines from before flippers were invented.

Black and his son Sam explore the facility in the brief video, highlighting tables like 1945’s Goalie and 1978’s Hoe-Down.

“That’s the beginning of games as we know it,” he says, pointing to the figures under the glass on the Goalie table. “That’s… a gaming.”

Black gets briefly excited about the concept of popcorn.

The video isn’t particularly informative, but it’s not quite as outrightly strange as Black’s announcement video, either. But it’s certainly a start, and it suggests the initial video he released wasn’t entirely a weird joke.

Here’s the video, in all its beardy glory:


Black does seem to be committed to creating more videos, and “A House With Pins In Its Balls” does feature some more thoughtful editing and production than his first offerings on the channel. Black says he’ll be releasing new videos every Friday, although it may take some time for him to arrive at current PC games like Fortnite if we’re starting out with pinball.