THQ Nordic has announced its Gamescom line-up, with four games to be playable on the show floor and four more to be showcased behind closed doors. Of those eight titles, we already know about six of those games – the remaining two are a mystery, but the publisher has dropped some maddeningly vague hints about what to expect.

One of those titles is a “world exclusive announcement which will break cover during the official Gamescom opening ceremony.” Both games are teased as part of the line-up image below. One shows a red and yellow sunset, while the other shows a blue background – maybe ocean or clouds – with a scarf billowing in the wind.

Plenty of fuel for our list of upcoming PC games.

Of course, that doesn’t tell us much, but we do have some external clues. The biggest of those points to a new Jagged Alliance, which the publisher acquired the rights for back in 2015. Late last year, the Jagged Alliance website was relaunched with nothing but a “coming soon” message and the THQ Nordic logo. We’re already stretching the definition of “soon,” and this would make an ideal platform for a reveal.

We do know some of the things that won’t be there, too. Don’t expect a new Saints Row, for example. Though THQ Nordic has purchased Deep Silver, the latter still runs as independent entity, showcasing games like Metro Exodus under its own name at E3. You also won’t see any of the Nickelodeon properties THQ Nordic has licensed, according to the company’s Twitter. 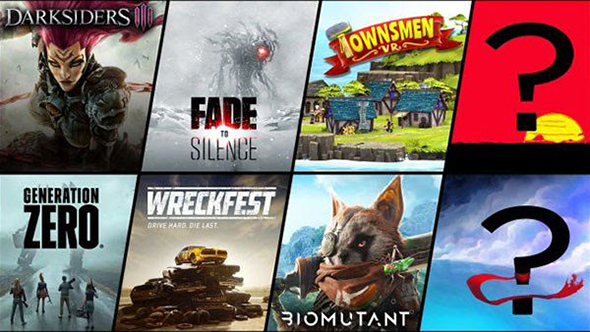 THQ Nordic also announced two new games at Gamescom last year. One was Biomutant, which we’re still awaiting the release of, and the other was Black Mirror – which seems to have slipped completely under the radar upon its release last year.