This week sees Spectre, the 24th James Bond film, release in cinemas. But despite the previous two Daniel Craig films being accompanied by a video game release, this year you won’t be able to replay the good bits in digital form when you get back home to your PC. Not that that’s a bad thing, of course: Quantum of Solace and 007: Legends were both astonishingly bad, so optimism for a Spectre game would be roughly equal to Die Another Day’s critical rating.

Bond needs to get his act together if he’s going to feature on our list of thebest FPS games on PC.

It doesn’t have to be this way. Over 32 years of Bond gaming history, there have been some highlights. Unfortunately though, if you’ve only ever been a PC gamer you won’t have been able to play the good ones. Just ten Bond games have made it to PC, and none of them are Goldeneye 007. Instead we’ve had a couple of terrible text adventures back in the ‘80s, the lackluster Blood Stone, and the abysmal Nightfire. That last one is of special note: rather than the fun shooter released on consoles, the PC version of Nightfire was an entirely different game, apparently imported straight from Satan’s U-bend. 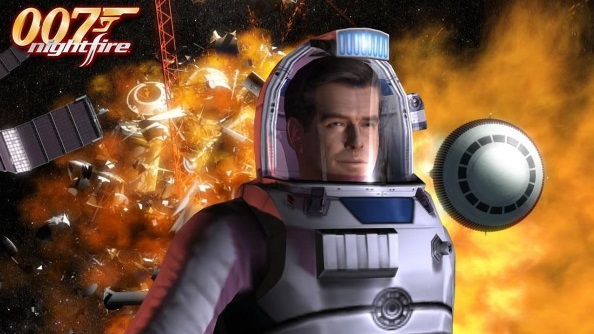 So what have we been missing out on? Goldeneye is the obvious choice, but if we’re talking honestly Rare’s legend is actually a better example of a great formative FPS rather than an excellent Bond game. Instead we need to look to the days when EA were custodians of the Bond licence, where they thrilled with four console-only games that really captured the spirit of Britain’s best-loved mass murderer. Agent Under Fire, Nightfire, and Everything or Nothing are all great examples of Brosnan-era original stories, with stealth, gadgets, violent driving sections, and cast members from the films. The first two are FPSs, but it’s Everything or Nothing that stands out. A third-person shooter, it captured the cinematic feel of Bond by replicating more physical moments like cool punch-ups and rappelling down exploding buildings. Oh, and Willem Dafoe was the bad guy in it, using nanotech to destroy the world.

All of EA’s 007 games are disappointingly short, but it made them true to the spirit of Bond by being set-piece after set-piece. A motorway chase with on a gadget-laden Triumph Daytona. Destroying Red Square in a platinum tank. Escaping a torture machine with seconds to spare. It’s set pieces like these – Bond moments, if you will – that make Everything or Nothing so notable. But it gets better. In EA’s final Bond game, From Russia With Love, you get to fly a digital Sean Connery over the Houses of Parliament using the Thunderball jetpack, before saving Natasha Bedingfield from the flaming wreck of a helicopter you just shot down. That we had to miss out on this on PC is a crime in line with Blofeld’s worst atrocities. 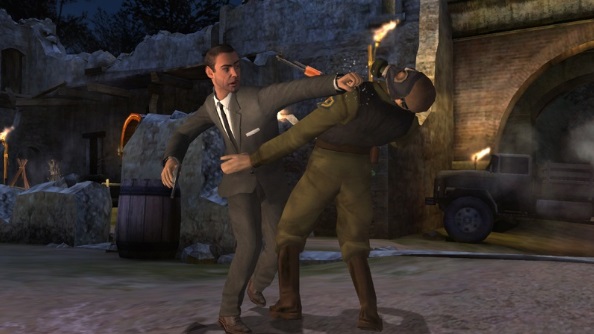 The sort of Hollywood fun that EA managed during its time with 007 is to be expected: every Bond film is pretty much a computer game anyway. There’s a variety of exotic locales, a cast of characters giving out missions, a lab that provides a variety of really cool equipment to kill baddies with, a final boss battle, and things going boom all over the place. That only EA have every truly captured the essence of Bond is astonishing since the blueprints to a good game are literally imprinted on reels of celluloid film that have been hanging around for up to 53 years.

As the film series’ quality has seen a notable lift since Daniel Craig took on the role, the games have nose-dived under the guardianship of Activision. That in itself is also perplexing: Activision’s own Call of Duty steals so much from Bond with its set pieces. Modern Warfare 2’s chase sequence through a favela in Rio de Janeiro is clearly lifted from Casino Royale’s parkour opening, while its sequel’s attack on the London Underground foreshadowed the events of Skyfall two years in advance. But while inspired by Call of Duty, Activision’s Bonds have just been rote shooters with no energy, excitement, or wit. 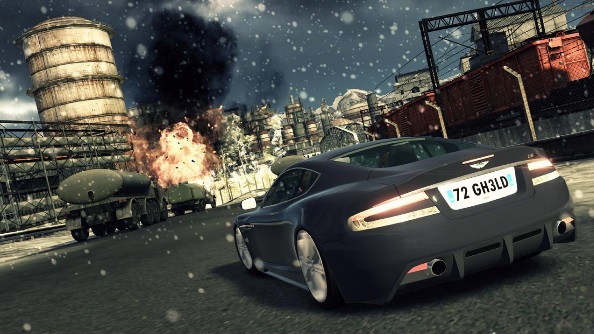 So what should you plump for instead? Well if you’re looking to play as an actual spy, then Clandestine is a solid pick. A co-op game where one player goes into the field armed with gadgets and a silenced pistol, and the other works as a hacker sat back at base, it does a great job of replicating the kind of relationship Bond and Q have in Skyfall and Spectre. There’s no car chases or villain with a deformity, but its mix of mechanics and spy cliches is as perfectly blended as Bond’s Vesper Martinis.

If you’re going solo, then Obsidian’s spy RPG Alpha Protocol is the way to go. It’s Bond by the way of Mass Effect, with moral conundrums among the many goons in need of shooting.

Of course, neither of these games open on the gun-barrel sequence, or have a belter of a theme tune sung over the silhouettes of dancing women. There’s no Aston Martin chase sequence, no laser watch, no M shouting “Do as you’re bloody well told, 007” in your ear. When you make something explode, your character won’t make an amusing quip as the music blares “da da da daaa da da da”. The familiarity of Bond and all the jigsaw puzzles that make the films predictable are actually the keys to making a terrific 007 game. You can’t live the fantasy without them. 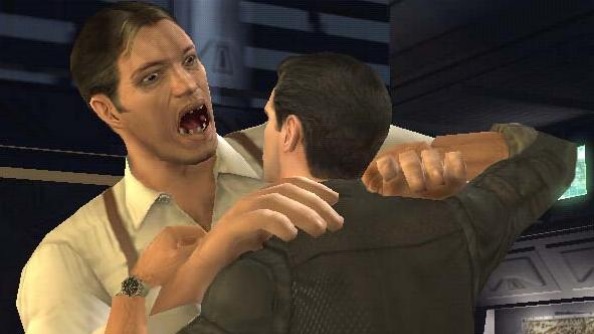 There’s admittedly a lot of work in a Bond game – you need a studio that has a teams that excel in both shooters and racing games, but that’s practically any big publisher these days. And with the leaps in game design we’ve seen since since Bond games were last good, it’s not difficult to imagine the kind of experience we could have. Just Cause 3 meets MI6, anyone?

The Bond games need a good shake and stir. Fleming’s super-spy needs a worthy game outing that reflects his successes on the big screen. And it needs serving up at the PC bar, pronto.

What mechanics and missions would you have in a new James Bond game? Hand us your dossier via the comments below.