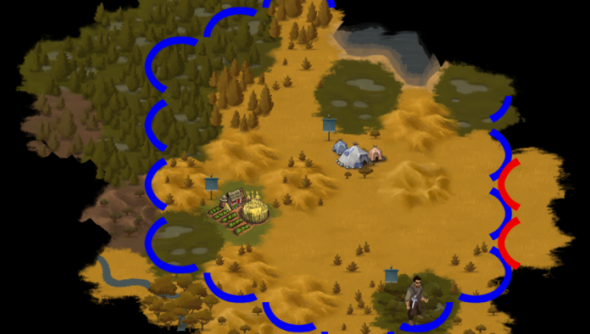 Civilization V designer Jon Shafer’s a bit like my mum. He says “at the gates”, right, but what he really means is “just looking for my keys, be with you in an hour”. And then when he finally gets here, yeah, the presents aren’t presents at all, but sticks. Just hundreds of twigs and branches wrapped up and ribboned like presents, because it turns out you haven’t been a good boy this year after all, and hey, that’s the sobering reality of Christmas. Mums, eh?

But enough about Jon Shafer. At the Gates won’t be released til 2015.

At the Gates is a small-budget, large-scale strategy game, successfully Kickstartered to the tune of $106,283 back in March. Alpha testing began in October, highlighting a host of minor bugs and a number of “high-level question marks” in the game’s design.

“The biggest hole we’ve identified relates to structure and goals,” wrote Shafer in a backer update. “Most of the planned big gameplay features are in, but what does it all add up to while you’re playing? Sure, you can explore the map, survey and harvest resources, migrate from one place to another – but why? What the heck are we trying to do here anyways?”

His predicament reads like profound existential amnesia, but chiefly concerns something rather more specific: diplomacy. Conifer Games’ long-term goal is to have AI factions guide player experience through the decisions and demands they make, and though work began on that front “a few weeks ago”, it’ll take plenty more yet. Months, in fact.

“Not only is it important in defining the feel and pacing of the game,” said Shafer, “but getting it right will also take a significant amount of playtesting and iteration.”

At the Gates will enter beta testing in the first few months of 2014 – but Conifer anticipate that it’ll remain in “tweak and polish mode” for a long time afterwards. Long enough to push release of the finished game beyond December next year.

“I’ve noted in both the original Kickstarter pitch and subsequent updates that the goal with AtG is not just to make a strategy game that not only breaks new ground but also one that is polished at release,” explained Shafer. “This recipe calls for one key ingredient which has no substitute: time.

“AtG could be released as originally planned in mid-2014 as a ‘good’ game. But would it be one of the best strategy games ever? Probably not. As such, I’ve made the decision to push back AtG’s release.”

Shafer notes that the “flexibility” in scheduling has only been made possible by Conifer’s Kickstarter gains, which more than doubled their initial target. So, uh, thanks for the delay, everyone.

In all seriousness, though: I imagine every At the Gates fan can stand to wait a few more turns to see the fruits of their investment grow. That’s what 4x games are all about, right?