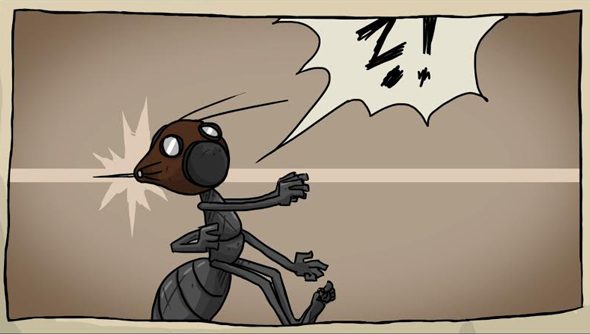 Finally, after countless forays into humanity’s darkest, brownest hour, we have a post-apocalyptical comedy! Swiss developer Koboldgame’s first commercial release could easily be doubly doomed, an effort in the reportedly dead adventure game genre set in a dying world, but rather than focusing on ailing humans, Journey of a Roach follows those comfortably placed to thrive on the irradiated earth: cockroaches.Jim has been cruelly separated from his friend Bud by a paramilitary ant outfit, so now he must progress, via a haphazard combination of design, luck and calamity, through a series of puzzles to save his friend. 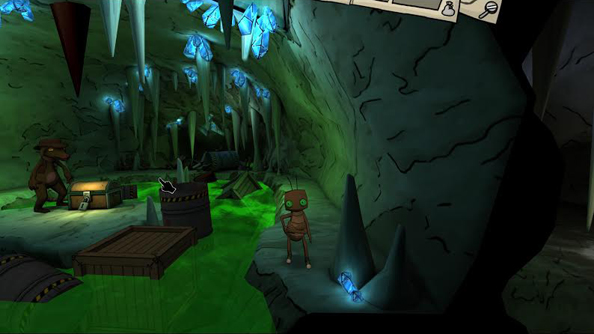 For the most part, puzzles are safe, untaxing examples of conventional knowledge twisted into absurdity. Nothing inspired, and the ambitious moments feel more overcomplicated than clever, but solutions are normally sensible, causing only occasional befuddlement. A lack of distinct partitioning becomes the main challenge to solving them. Repeatedly, an invisible hierarchy dictates that one puzzle must be solved before others without sufficiently indicating where a player’s cluttered inventory should be directed. Adventure games may be designed for torturing them brain cells, but too much undifferentiated visual information and interactive objects led to a lot of futile neurone sparks.

For a genre renowned for the strength of its writing, these roaches surprisingly avoid uttering a single line of dialogue. Instead, characters make their needs known by spouting wonderfully expressive pictures in speech bubbles. Long, expository speeches dropping revealing phrases are replaced by the immediate impact of scribbled drawings. Unfortunately, a great technique to naturally provide feedback is wasted up as there’s little contextual change. Misapplied items or constant faffing around nevertheless produces those same inscrutable floating pictographs. With a better hint system, this would be fine. But as the game assists item location instead of providing puzzle hints, what starts as a cute idea becomes a limited tool that doesn’t fully realise its uses. 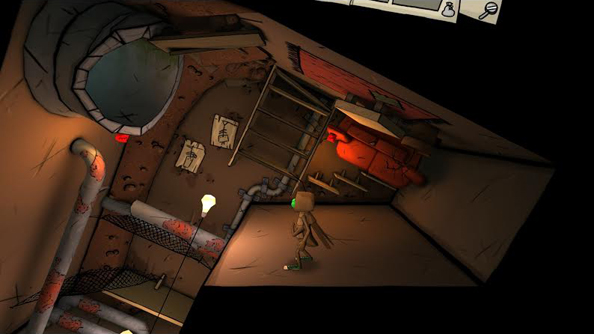 Without dialogue, visuals take the duty of conveying the character of the cast and their world. Characters like treasure hunting dogs, retired military wasps and maternal spiders are all colourfully drawn and placed in interesting scenarios individually. However, environments have a slightly sterile diorama feel that spoils an otherwise interesting arrangement. Most characters stand still, looping a basic animation sequence, and puzzle outcomes produce a fizzle rather than fireworks, even if occasional hand-drawn cutscenes add some fanfare. Strong character design and level layout just never quite pops.

Environments are square and strangely proportioned, wide with limited depth, presented side-on like an unpleasantly bug-infested doll’s house. While these rooms may feel surprisingly confined at first, Koboldgames ingeniously open up these compact areas by letting Jim crawl up walls and along the ceiling. It’s a nice workaround to expand what would otherwise be cramped environments, although in practice it’s used to ferret away items more often than it’s integrated into puzzles. 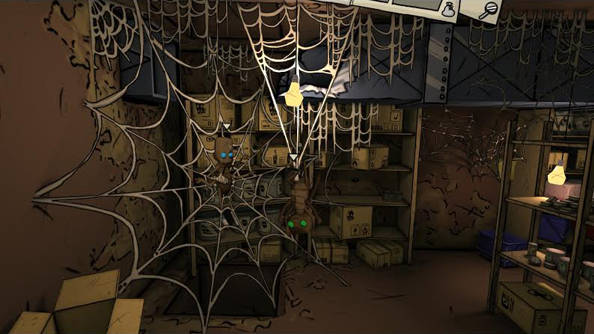 Basic usability issues also interfere. For example, items become indistinct black and white icons once they’re in the inventory, with no informative mouseover text. This becomes problematic as the inventory swells, getting so bad that I spent a while thinking a fuel can was an audio cassette –blame my cobwebbed memories of archaic technology. The liberating sensation of climbing walls and ceilings is quickly curtailed by Jim’s habit of getting caught on doorframes and other unintended obstacles too.

Journey of a Roach’s strong ideas loses too many of the conventional adventure game’s strengths without gaining enough from them to compensate. It can’t even retain the strengths of its setting, quickly jettisoning its post-nuclear scene for a standard flavour of cartoon zaniness. Too many basic lessons on how to treat players go unlearnt. Even over its short duration, initially colourful scenarios become sadly static and tired. Journey of a Roach has some promising ideas, but unfortunately struggles to demonstrate them at their best.