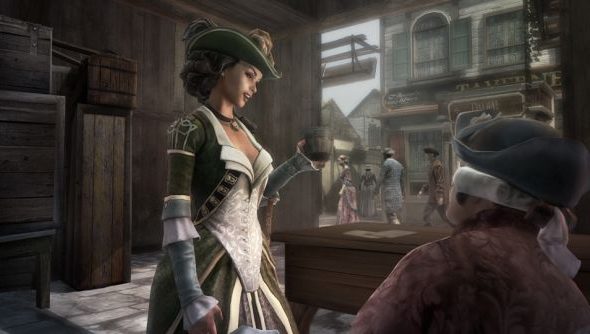 You probably didn’t really notice Assassin’s Creed III: Liberation, as it was originally known when it arrived on the PS Vita last year. But in many ways it’s a far more exciting prospect than the PC game it walked in with.

Let’s count them: first, there’s the disguise system that means Liberation is as much about costume-swapping as it is tree-hopping. Then there’s the family tree of Aveline de Grandpré, AC’s most compelling playable character since Ezio – 50% French merchant, 50% African slave and 0% Desmond Miles. And third, there’s its creative director, one Julian Gollop: creator of the original X-Com and until last year resident of Ubisoft’s Sofia office.

Liberation has dropped the ‘III’ for its HD re-release, but picked up new character and facial animations, a day-night cycle and missions reworked according to player feedback.

“Since Assassin’s Creed Liberation is already out, we gathered all the reviews and all the comments from the community, we put all the data together and we ended up with a big priority list of things we wanted to do,” associate producer Momchil Gindyanov told Polygon.

“Were the missions too tricky? Too hard? Too tedious? Was it boring? We tweaked all the missions and put in little gameplay elements to ensure the fun of the missions.”

So there you have it: not only is Liberation the most intriguing Assassin’s Creed game to hit the PC since Brotherhood, it’s also newly not boring. Can you see yourself heading to Louisiana for another shot at 18th Century assassination, or did you get your fill steering old Ratonhnhaké:ton between those disconcertingly low rooftops?