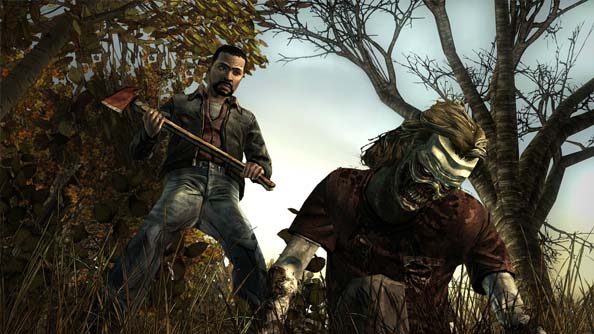 This essay on why The Walking Dead is my game of the year contains spoilers for important scenes from throughout the game. If you haven’t played it, please take my recommendation that you should. If you have played it, come on in. Take a seat. There are important plot points to discuss.

There have been some exceptional games released this year but none of them are as powerful as The Walking Dead.

Why? More than anything, it’s because I genuinely care for Clementine, the young girl you protect in The Walking Dead. I’ve been playing games for years. Somehow, she is the first written character I worry for. Clementine is funny, smart, and can catch you off guard. There’s a moment in episode four, you come back to the house where your group are holed up and find that Clementine’s missing. You search the house, going into every room, asking everyone, where she is. No one can give a straight answer, all shrugging responsibility for needing to look out for her. I became almost frantic, angry that no one could tell me where Clem had got to.

Then I found Kenny downstairs, getting drunk, wrapped up in himself, I used every pissed off speech option the dialogue gave me. How could he be so stupid as to let her go. Then, when I finally got out into the garden and found her, I felt relieved. Actually relieved.

It’s not just the writing that makes the game work. The writing is informed by the design and vice versa. I wouldn’t worry for Clementine so much if the game hadn’t already shown my character, Lee, a fit adult, to be vulnerable at the hands of walkers. Killing walkers is rarely easy: aiming with shaky hands makes each kill earned.

Something that’s been tagged as a weakness of The Walking Dead is that no matter which way you play it the major plot points remain the same. It’s a valid criticism but I think it misses the opportunity this has afforded the developers.

I recently sat and watched as a friend played through the first four episodes. She made many different decisions compared to my play through: but she was able to justify them as strongly as I could justify mine. There really wasn’t a right way to do things. As we got further into the story, there were points of very clever coalescence. At the end of episode three I killed Kenny’s son. As the leader of the group, I assumed responsibility. My friend had Kenny do it. She argued that it’s on the father to do that to their child. If she’d done it then Kenny would have never overcome the shame. When we met the starving walker in the attic in episode four we were met with a similar choice. This time, I had Kenny kill the walker, as a way for him to get closure on his son’s death, to make him stronger. If I’d done it myself he would have been left impotent and broken. I did the best thing for him. For my friend, she killed the walker for Kenny. Her Kenny was on the point of collapse after killing his son, to be put through the same experience would have broken him. She did the best thing for him.

By having the same plot points navigated in many different ways, Telltale have reinforced a theme that runs through the series: what’s right is entirely down to perspective.