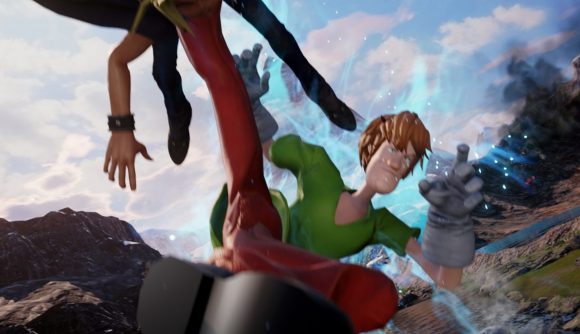 While we were all distracted by the possibility of Shaggy getting into Mortal Kombat 11, modders have gone and given us an even more perfect match. Shaggy is now an unofficial member of the Jump Force roster, so he can pit his mysterious powers against the planet-crushing force of Goku and the rest of the Shonen Jump crew.

It’s an appropriate crossover, since the Shaggy memes apparently date back to a 2017 video mashing up a Scooby-Doo fight scene with Dragon Ball Super. The mod appears to replace Vegeta, and I’m sure the proud Saiyan prince would love the knowledge he’s been replaced by a family-friendly stoner with a penchant for saying “zoinks.”

The mod includes custom voice lines for Shaggy, though it doesn’t properly animate his mouth or replace Vegeta’s original subtitles. You will have to use your imagination for at least a little bit of this one. The download, courtesy of modders Beatz and Vaanrose, is available via Jump Force Mods. Installation looks like a simple file extraction, though it will require you to circumvent the game’s anti-cheat protections.

You can check Shaggy out in action through the video below.

It’s good to see the anime fighter get some love from the mod community, though as noted in our Jump Force PC review, the game itself doesn’t really deliver on the promise of its massive roster.

Related: Brawl it out in the best fighting games on PC

But if mods are already looking this nice just a week after release, maybe there’s hope for the brawler yet.