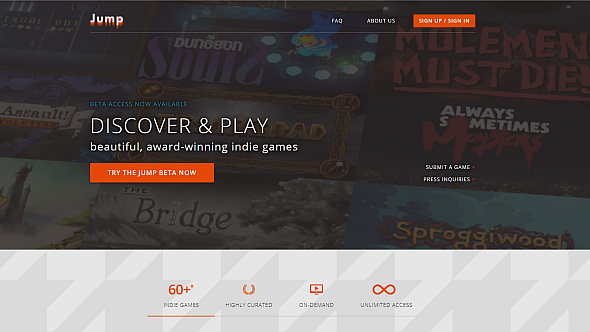 Discoverability: perhaps the biggest challenge right now for games without a certain level of marketing budget – which is to say, most indies. Former indie devs Kermdinger Studios, whose experience obviously makes them pretty well attuned to the problem, are aiming to solve it by launching not a game but a game platform: Jump.

Looks like some of the best indie games on PC are about to get a new home.

“Think of it like Netflix,” company chief Anthony Palma says. “You go in there now and you get these very specific categories, like indie horror movies with strong female leads. That’s what we want to be able to do. So we will be able to serve up not only games that you particularly will like, but we’re also gonna be able to resurface games. So just because your game launched in month three and now its month 12, it’s not going to be buried and unfindable.”

Jump launches in beta this month, and, like Netflix, will charge a monthly subscription of $10 for access to a game library that emphasises indie work. You’ll be able to access that library via Jump apps on PC, HTC Vive, and Oculus Rift, and Palma promises it will be highly curated: “it’s going to be between 60-100 games at launch, and then we’ll be adding a certain number every month after that.”

Jump will also have a unique payment model: devs will get paid in proportion to how much time subscribers spend playing their games. Combined with the highly selective (or, in other words, small) library of games, this could mean that indies stand to make more money on Jump than Steam. That’s key in Palma’s pitch.

It’s worth noting that Steam’s forthcoming overhaul is purportedly designed with discoverability in mind, but it’s nice to see someone else offering another solution, and another vehicle for hard-working indies to get paid.

You can check out Jump here (remember, it’s in beta) or read Palma’s interview with Gamasutra in full here.