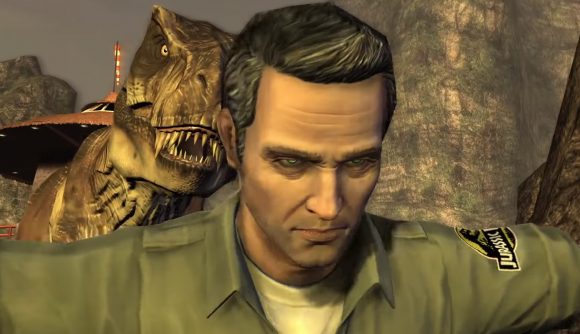 Telltale’s games had their ups and downs over the years, and while folks will disagree on the absolute best and worst, pretty much everyone notes that Jurassic Park: The Game was a low point. It was an awkward transition piece between the traditional adventure games the studio started on and the post-Walking Dead narrative pieces that would follow. Jurassic Park didn’t really measure up in either category, but it sure is entertaining to watch its cutscenes play out with animations removed.

DPO23 has been making bizarre animation mods for years, but a video titled ‘Jurassic Park: The Game but T-pose’ might just be the most delightful. As the title suggests, every human character has their arms stretched out to the sides in an unmoving display of personal fortitude. Their legs still move, though, and there’s plenty of escaping from dinosaurs to be seen.

The dinosaurs themselves have no animations at all, smashing against the humans they’re trying to eat just like you used to do with your old action figures. It’s nostalgic in its own weird way.

Watch it for yourself below.

If you want a chaser for that shot, ‘Fahrenheit: Indigo Prophecy but 2D models’ on YouTube is also an excellent use of your time, though it is a significantly more nightmarish experiment. You’ll never unsee those eyes.