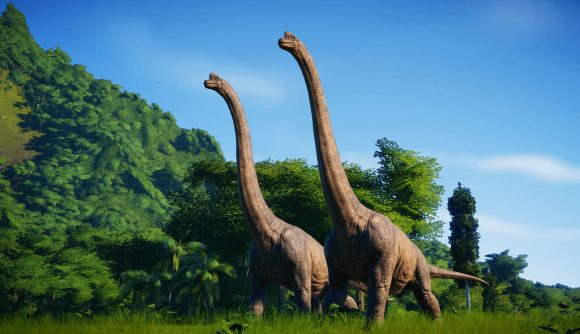 On April 10, Universal Studios filed a trademark for a videogame called Jurassic World Aftermath. That’s the only concrete information out there on this project – it could be anything from a full, proper Jurassic Park game to a VR experience or mobile game – but at the very least, I’m excited about the possibility of a big new game in the franchise.

Fansite Jurassic Outpost discovered the trademark filing yesterday, alongside the registration of the JurassicWorldAftermath.com URL. Neither trademarks nor URLs are especially difficult to register, and this is by no means a confirmation that a game called Jurassic World Aftermath is coming out any time soon – but it does indicate that Universal is at least making plans for a new game in the franchise.

A cancelled game titled Jurassic World Survivor was in development at the now-shuttered Cryptic Studios Seattle under Perfect World Entertainment some years ago, and some early footage leaked ages ago – complete with an impressively-animated T-rex and human animations that suggested a third-person action game.

There’s no clear connection between Survivor and Aftermath, but that’s at least some indication of the kinds of videogame projects Universal has been working on behind the scenes. Hopefully we can start expanding our list of dinosaur games soon.