Frontier Developments has announced Jurassic World Evolution: Claire’s Sanctuary, a new content pack that will feature a story mission, two new maps, and three new dinosaurs. The studio will also be releasing a new, free update that adds more depth and detail to the base game.

Jurassic World Evolution: Claire’s Sanctuary introduces a new way for players to experience the game. In an attempt to make the expansion as authentic as possible to the films and the Jurassic Park universe, the campaign focuses on the plot of the most recent film, Jurassic World: Fallen Kingdom. In this mission, instead of creating a theme park, you are tasking with building a research and operations centre to investigate an illness infecting the dinosaurs.

The DLC has two new maps, Isla Nublar North and Sanctuary. The first part of the campaign takes place on the abandoned part of Nublar, a section of the island that is currently in peril due to an active volcano, Mt. Sibo. To rescue the dinosaurs, you’ll need to house them whilst you study their symptoms, discover a cure, and then prepare to move them to the sanctuary, an area that can be accessed later on in the campaign.

Helping you through this endeavor is the plucky Claire Dearing, the film’s dino-rights activist and founder of a protection group for Nublar’s dinosaurs. Claire’s actress, Bryce Dallas Howard, voices her in-game, helping Frontier keep the bar of authenticity high.

The roster has nearly 70 dinosaurs, and this DLC will add three more fan favourites to the mix

Although the sanctuary in the film is never seen, Frontier has brought it to life in Jurassic World Evolution. It’s an ideal home for the dinosaurs to live in their natural habitat without having to worry about active volcanoes or leering predators. However, there is a catch to this sanctuary – when saving the dinosaurs from the dark side of Nublar, you can only save a certain number, meaning that some will have to be left behind. You start the level of the sanctuary with the ones you saved, but the ghosts of the dinos you left behind will haunt you forever.

Jurassic World Evolution’s roster currently has nearly 70 dinosaurs, and this new DLC will add three more fan-favourites to the mix; the Albertosaurus, the Euoplocephalus, and the Ouranosaurus. 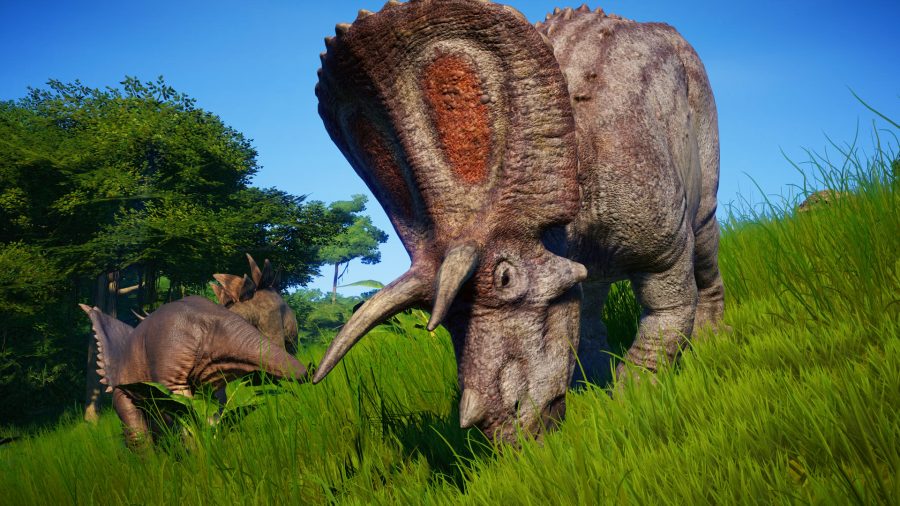 The DLC also includes a new feature called paleobotany, that helps you feed your herbivore dinosaurs the very best diet – sorry Albertosaurus. Paleobotany gives you the ability to customise what you feed your veggie friends. Using the new greenhouse, you can research and grow certain plants and put them in the new paleo-feeder. Giving the right plants to the right dinosaurs can give them bonuses, just like when the carnivorous dinosaurs chow down on their neighbours.

Although the sanctuary in the film is never seen, Frontier has brought it to life

Alongside the DLC, Frontier has released a free update to the base game which includes several small but important changes for dino fans. The spinosaurus group has now been adjusted to eating what they would have eaten all those millions of years ago – a healthy dose of fish. These hungry boys can eat through the new fish feeders, an object that you can place within lakes and rivers in the new wetland terrain.

It also seems that Frontier has started to incorporate tools from their other management games into Jurassic World Evolution. There is now a range of terrain materials – that you might recognise from Planet Coaster – that lets you change and decorate habitats. You can paint different terrain materials straight onto surfaces like sand, mud, and rocks. With these creation tools also comes new scenery objects like trees and boulders and more creative habitats can give boosts to your dinosaur. A happy dinosaur makes a happy home.

Read more: Check out the best dino games on PC