If Jurassic World Evolution proves anything it’s that a lot of work goes into creating a park of genetically engineered dinosaurs. You have to worry about feeding them, keeping them healthy, and oh my goodness please make sure they don’t escape. Watching as your guests are turned into a banquet is terrible for your stress levels.

Then there’s the issue of efficiency and space within your park. On each of The Five Deaths – the islands you build on in the game – you’re given a small patch of land to work with. This means you often have to pair different species together in enclosures as you introduce new dinosaurs to your park.  You’ll have to learn to make the best use of every available inch as you demarcate each dinosaur enclosure, then.

Put incompatible species together in the same pen and you’ll suffer the devastating consequences. Your attractions will starve, or worse – get eaten by their much larger and toothier neighbours.

With that in mind, we’ve put together a simple guide to building better enclosures in Jurassic World Evolution. We’ll quickly get you up to speed with which dinosaurs you can house together and how to keep them all happy and healthy.

Herbivores are the easiest dinosaurs to enclose together. The reason why is obvious: they won’t eat each other. But that doesn’t mean they come without their own problems.

The biggest issues with keeping herbivores arise from two specific traits assigned to each of your dinosaurs – Social and Population. Social tells you the number of the same species each dinosaur can comfortably live with in the same pen. Population refers to the number of dinosaurs (regardless of species) each of them can exist alongside in the enclosure. If you fail to balance these traits, your dinosaurs become uncomfortable and some will even try to escape. 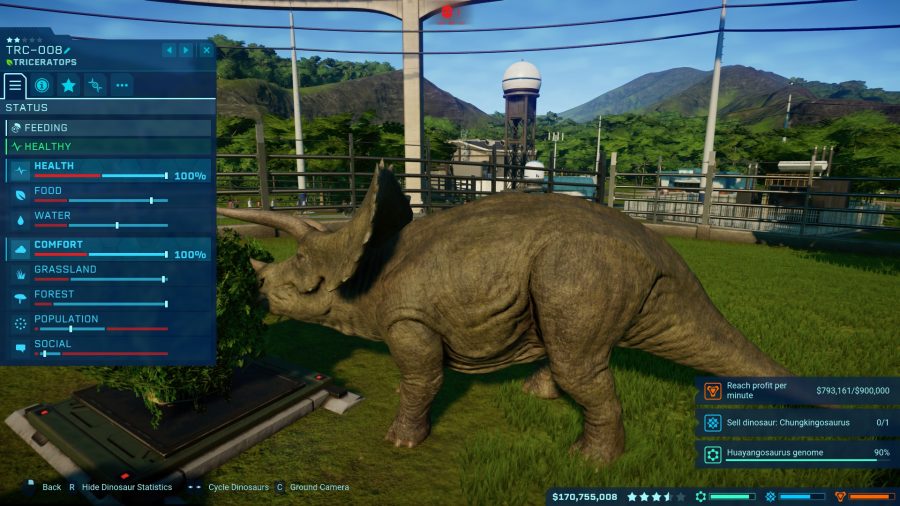 A good way of avoiding this is to keep several pens for your herbivores and put compatible dinos together, separate from those they’re not comfortable with. The Ankylosaurus and Nodosaurus can only live among certain other dinosaur species, so it’s a smart move to house them together, and then fill in the remaining space with a more versatile species, like the Struthiomimus or Gallimimus. These smaller dinosaurs can survive without much social interaction, so that makes them perfect for cohabitating with bigger, more difficult herbivores.

build the enclosure around one species to meet their specific needs

Likewise, you should house the Ceratops together – such as the Styracosaurus, Triceratops, and the Torosaurus – as they have very similar traits. Just make sure they have a partner each to keep their social attribute up to an acceptable level. You can do the same for Ornithopods too, including the Edmontosaurus, Maiasaura, Corythosaurus, Parasaurolophus, and Tsintaosaurus. Distributing these different types of herbivore across separate enclosures means you will have fewer stats to concern you, so it’s a smart move all around.

As for the bigger herbivores, it’s best to build the enclosure around one species to meet their specific needs. The Diplodocus needs a lot of grassland, for instance, while the Brachiosaurus needs a more forested landscape. If you’re struggling for space to satisfy both species, put them into two enclosures and provide for them separately. Then use animals with a high tolerance for other species to occupy the gaps in the enclosure and bring up the population. Just make sure you have multiple food sources available.

Sauring through the sky: The best dinosaur games on PC

To save more room, you can pair carnivores together as well. The general rule for this is to couple a smaller species of carnivore with a larger one. This way, they won’t immediately get into a fight over territory after exiting the hatchery. 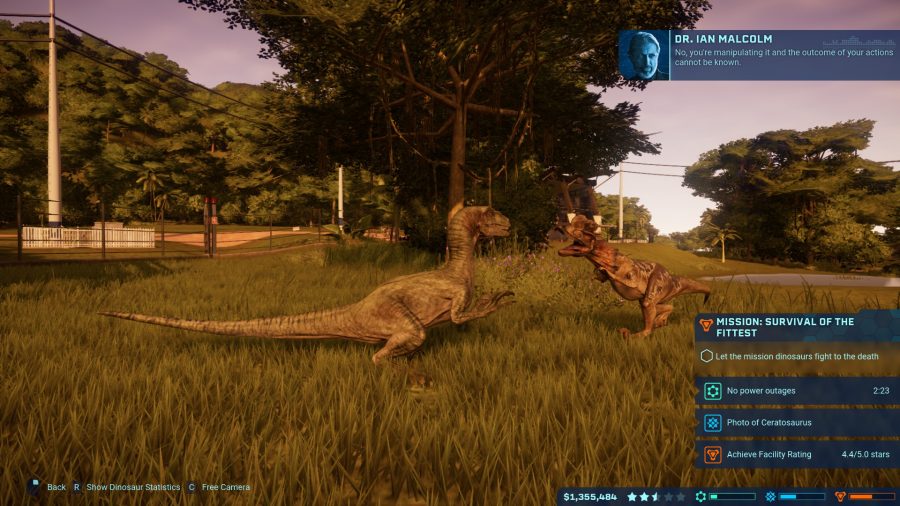 A few examples of carnivores that work together include coupling Velociraptors, the Deinonychus, or the Dilophosaurus with a T-Rex, the Metriacanthosaurus, or the Ceratosaurus. These combinations will see your carnivores coexist happily and will avoid you having to clean up a bloodbath.

What makes Jurassic World Evolution so good? Sure, it doesn't have complex management systems, but it makes up for that by giving you the magical joy of looking after a toy box of living, breathing dinosaurs

The important thing with carnivores, though, is to have lots of room in the enclosure to give them space to roam. You’ll also want to put down multiple food and water sources. Bigger carnivores will often bully the other dinosaurs and scare them away from food and water, which can lead to them becoming panicked and starving to death. In extreme circumstances, it can even result in fights between the two creatures. It is therefore essential to ensure you have the right number of available feeders for the allotted space.

Figuring this out is often a case of trial and error. For example, I found during experimenting that three Deinonychus could live comfortably among two Ceratosaurus in the space I had allocated, but a fourth would always struggle to drink and eat, as it would constantly bump into the other predator and spook itself.

As final point is that, if you ever need to tranquillise one of the predators in the enclosure to transport or sell them, make sure you’re ready with the ACU transport team. Predators will attack tranquillised animals and kill them in a matter of seconds.

You may think that putting a herbivore in the same enclosure as a carnivore is a recipe for disaster, but there’s actually a way to house both in the same pen without any problems. 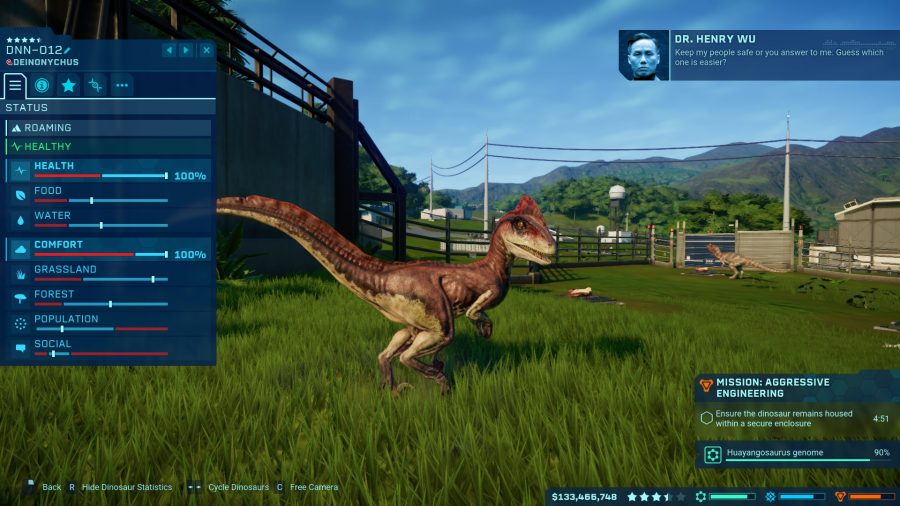 Large dinosaurs, such as the Brachiosaurus, Diplodocus, and the Camarasaurus can get on fairly well with smaller predators like Velociraptors, Dilophosaurus, and Deinonychus, provided they have their own source of food and access to water.

Dinos too much? Try one of the best simulation games on PC

You can also partner these smaller carnivores with armoured dinosaurs and Ceratops too. Just keep closely monitoring their individual statistics and alter their environment to suit. Certain herbivores and carnivores that enjoy similar environments include the Dilophosaurus and the Brachiosaurus, who both enjoy forested enclosures, and the Diplodocus and Velociraptors who need a lot of grassland. 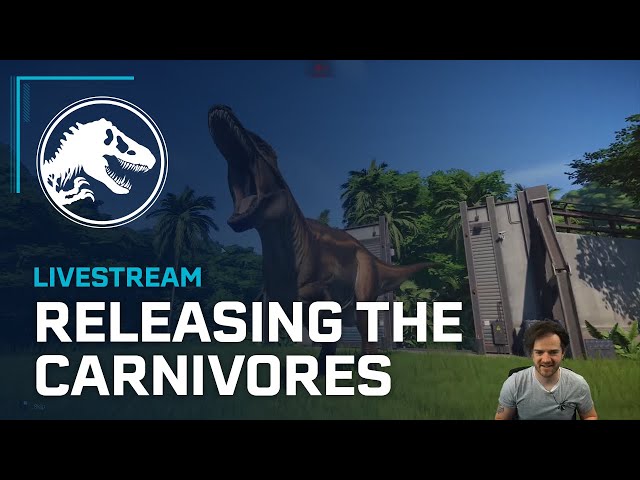 As for larger carnivores, stay away from putting them in with herbivores. It never ends well, as the carnivore always ends up killing the herbivores regardless of how many live goats are roaming the pen. I put a Ceratosaurus in with a few Chasmosaurus and it immediately went on a rampage, slaughtering every last one in a matter of minutes. Likewise, all carnivores will attack smaller dinosaurs like Gallimimus and so on, so keep them separate at all times.