There comes a point, soon after you genetically modify your first dinosaur, where you start to sound like you’re describing beasts from mythology. The Stegoceratops takes the crest and horns of a triceratops, the back-mounted plates of a Stegosaurus, the exoskeleton of a beetle, and goodness-knows-what from a snake. We’re assured the snake is in there somewhere.

There’s a reason you haven’t seen the Stegoceratops before and that reason is Colin Trevorrow’s son. Jurassic World protagonists Owen and Claire would have first encountered the dino, along with the rest of the world, upon discovering that Dr. Henry Wu was secretly making hybrids in the jungle.

The scene never made it into the finished script for the reboot, however, since Trevorrow Jr. pointed out that the Stego would’ve taken away from the shine of the new Indominus Rex.

The upshot of that decision by Universal’s most perceptive unpaid producer is that Frontier gets to tell the story publicly for the first time in Jurassic World Evolution. In the alternately serene and chaotic management game’s next DLC, we find Wu running an off-grid facility that, while not quite in the jungle – which presents countless construction issues – is certainly adjacent to it. Sure enough, among the three hybrids he has you breeding is the Stegoceratops. 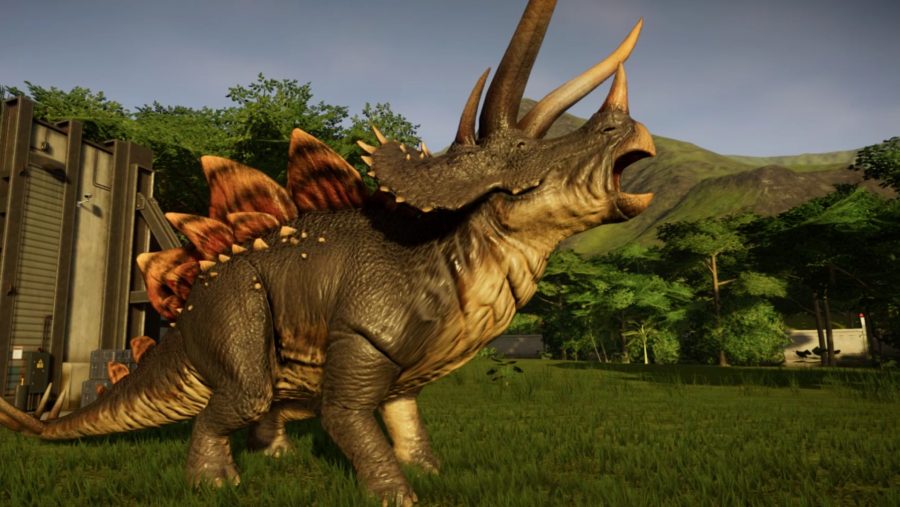 While we’d already seen the new Ankylodocus emerge from the Hammond Creation Lab, a splicing of Ankylosaurus and Diplodocus, there’s something altogether more unholy about the Stegoceratops at first blush. Perhaps that’s because the parts it pulls from its parents are so distinct. The broad fins on its back are instantly recognisable as those of the Stegosaurus, and coloured so differently as to give the appearance of a winged insect. The Stego’s four-pronged tail appears to open and close with the rhythm of its gait, like a venus flytrap, or a claw closing around prey.

There’s something unholy about Stegoceratops at first blush

Somewhere along the process, the Triceratops’ horns have been grossly exaggerated, as if by a caricaturist, and it’s hard not to wonder about the weight the beast is carrying. Wu claims that genetic modification is a tool that, when used correctly, yields art – and you imagine this composite creature is what he means. Welfare has never been at the top of his list of priorities.

No sooner have you brought the Stegoceratops into the world than Wu is asking for a variant with an even thicker hide. And once that arrives, his intention becomes clear – you’ll be facing it off against the Ceratosaurus, Evolution’s early introduction to toothy predators. 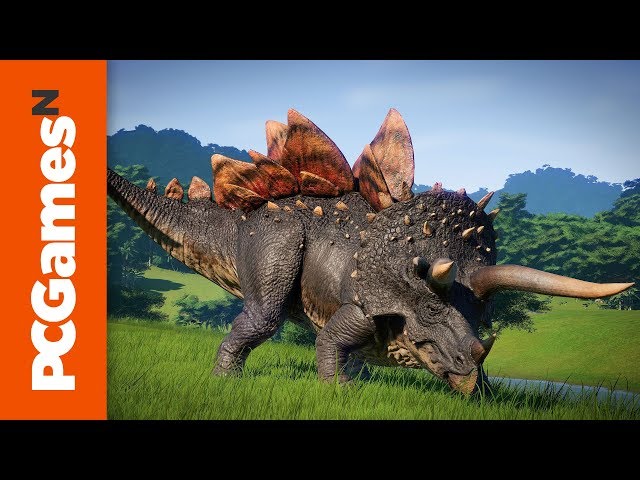 There are certain scenarios in which the Ceratosaurus looks scary, such as when velociraptors scarper as it stomps around a pen purpose-built to contain it. But here its three metre height is simply standard, and the horn on the top of its nose a blunt pencil compared to what the Stego is packing. But once those aggressive instincts kick in, it picks a fight anyway – snapping ineffectively at modified hide.

What follows is the most shocking animation Jurassic World Evolution has in its files: the aggravated Stegoceratops running the Ceratosaurus through with one of its horns, oversized like a JRPG sword, before letting the creature slide from the blade and slump lifeless into the grass. Never underestimate a herbivore. Especially one that’s been messed with.

We’ll be back tomorrow with another new hybrid from the labs of Jurassic World Evolution. Secrets of Dr. Wu launches on November 20.