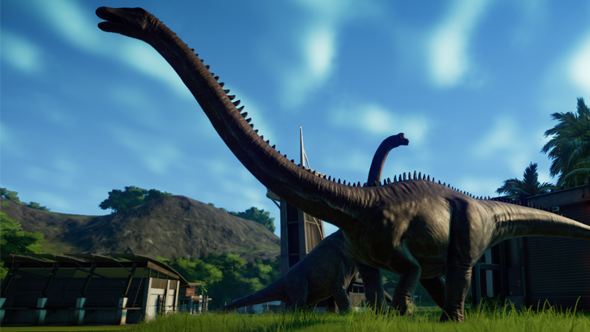 So, you’ve found yourself in charge of an island of ravenous meat-eating dinosaurs and tasty guests that want to get up close to them. Jurassic World Evolution is a dinosaur game about juggling the interests of your investors, advisors, inmates, and visitors, and it’s all just one electrical fault away from a disaster Steven Spielberg could have filmed.

Frontier Developments has made a game that requires the micromanagement skills you might have honed in Planet Coaster, as well as the adventurous – or should that be audacious – spirit of somebody willing to dig up fossils and experiment with them until a beautifully-coloured and well-behaved dinosaur comes out the other end. Yes, this is a management game, but it’s also one that requires you to balance the needs of art and commerce. If bringing ancient creatures back from the dead can be considered an art, which as the owner of a park that does just that, I would argue it can.

If you’re into looking at the bigger picture, try one of the best strategy games on PC.

It’s hard to succeed in this dinosaur-eat-tourist world, so here are our seven secrets to success in Jurassic World Evolution.

For those of you on the electrified fence, why not read our Jurassic World Evolution review? 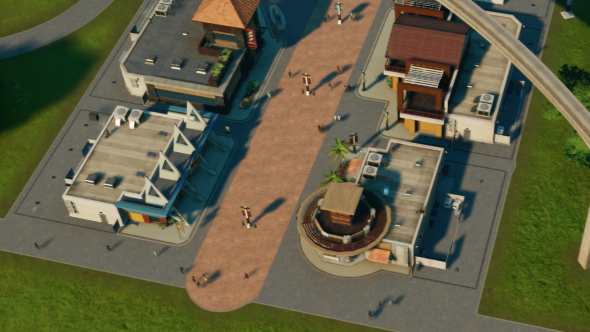 If you’re ever short on cash you should hop into your ranger’s jeep and take a drive deep into your dinosaur enclosure. Get up close to the creatures and start taking photos (tap ‘F’ to enter photography mode). Every photo you take of a dinosaur instantly converts into cash, so it’s a good way to bring in a little money.

Photos are rated based on the number of dinosaurs and variety of species in the shot, so aim to get group shots. The photos are also worth more if the dinosaur is doing something – eating, socialising, running, anything other than standing still. 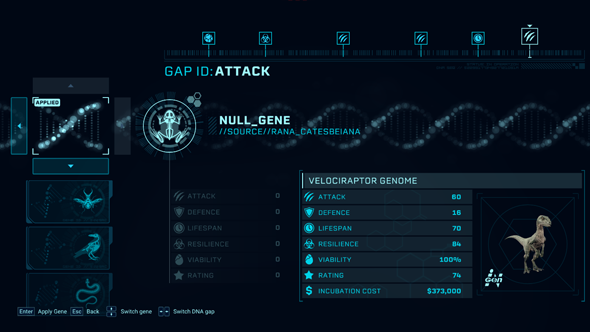 You have three advisors in Jurassic World Evolution, one each for Science, Entertainment, and Security. They will sometimes offer you contracts that, when completed, will reward you with cash and a reputation boost with that advisor’s division. However, you don’t need to wait for them to come to you.

If you go to the Control Room screen there’s a panel where you can request a contract and pick which division you’d like to do the job for. You can have up to three contracts on the go at once so you should always make sure you’re requesting as many contracts as possible – they’re easy money and the reputation you get from them is essential to advancement. 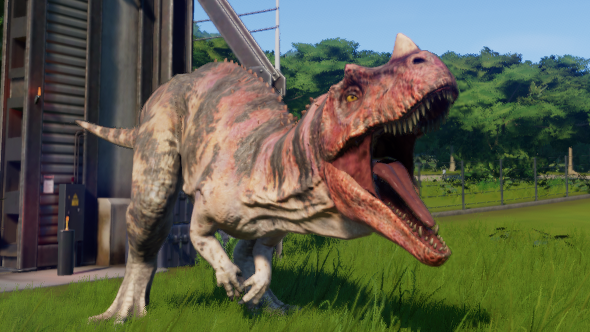 Speaking of reputation, if you build it high enough with any of the advisors they will reward you with new technology, a new strain of fossil, or an upgraded building – depending on which advisor it is. Plus, on each of the game’s five islands the advisors have a special mission that will net you a huge cash pay out in the millions of dollars upon completion.

4. Please one boss at a time 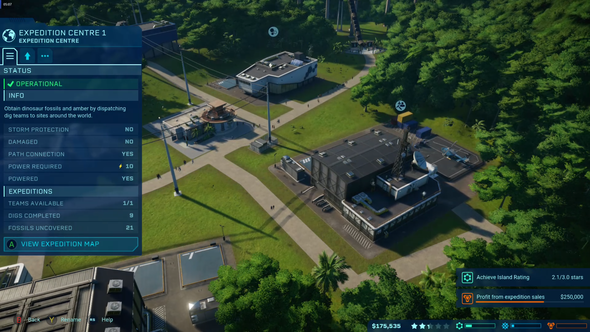 While it’s best to take on as many contracts as possible you’ll want to make sure you focus on one advisor at a time. Don’t spread your contracts out between the three of them. This is counter-productive. The reason being that, while every contract you complete for an advisor boosts your reputation with them, it also reduces the reputation you have with the others. So by spreading out who you’re doing jobs for, every job you complete is going one step forward with one advisor and one step back with the others.

This does mean that when you’re done pleasing one advisor and move to another you will have to start from scratch with them. But it’s better than never progressing with any of the advisors.

5. Seriously, focus on one at a time 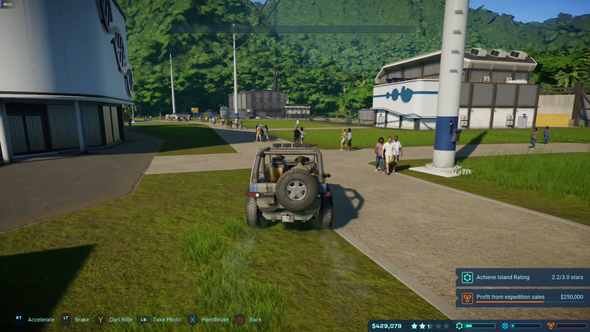 If you need more reason to focus on one advisor at a time, here you go: each advisor has multiple rewards for you on each of the islands. In order to get them all you’re going to need to build your reputation up with an advisor to as high as it can go. So don’t switch to building your reputation with another division until you’re sure you’ve unlocked everything an advisor has to offer you. It’s very possible to reach the game’s last island without unlocking some extremely useful buildings and technology, simply because you didn’t spend enough time with each advisor.

You can check to see how many of your advisor’s rewards you’ve unlocked by going to the Reputation Screen (which you can access through the Control Room) and clicking on the advisor’s card. The card will flip round and show you want unlocks they will give you on that island.

One unavoidable danger of building your reputation is that, as your reputation with one advisor builds, the risk of the other two sabotaging buildings on your islands grows. Yes, the advisors get proper stroppy if you don’t give them attention. So be prepared for gates to spontaneously open and power plants to mysteriously shut down. 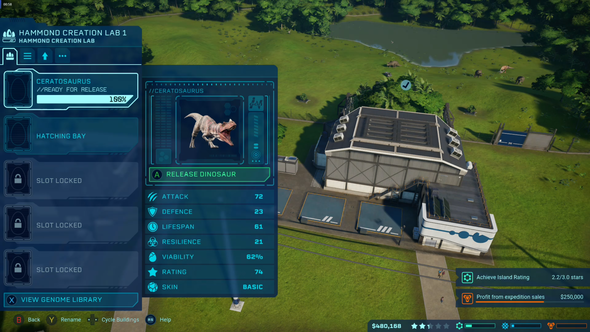 Space is often at a premium in Jurassic World Evolution so you should only duplicate buildings when you absolutely have to. This is particularly the case with power plants. When a new building needs more electricity than you’re producing, check to see if you’ve boosted the output of your power plants. The expansion for a pre-existing plant is much cheaper than building a whole new generator and saves taking up that precious space.

Upgrading your plants does introduce a little risk, however. There is a small chance an upgraded plant will shut down and will need to be rebooted by a ranger. It’s not a frequent problem but, well, if your carnivores are kept behind electrified fences, a power plant’s fuses tripping might only be the start of a very bad night. 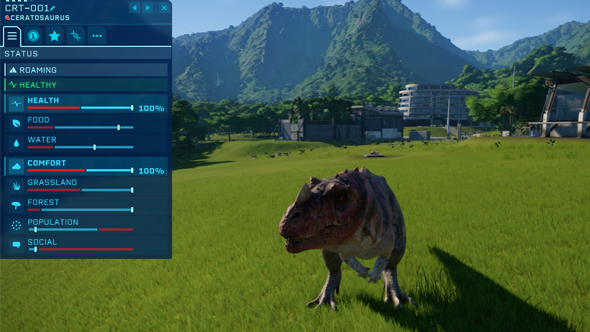 Your guests want to see dinosaurs, lots of them, but you can only build so many enclosures. It’s important you learn what dinosaurs are happy to live together and in what numbers, because you can really cram the dinos in together if you make sure they’re the right ones.

Triceratops are a big crowd pleaser, but they don’t like having too many neighbours, so don’t put them in with a whole herd of struthiomimus. Guests love a brachiosaurus but, like guinea pigs, you shouldn’t get just one as they get lonely. So be prepared for the cost of incubating at least two.

Some herbivores can even live along carnivores, if you’re selective. Big dinosaurs like the diplodocus are so large they aren’t really threatened by small meat eaters like the velociraptor. Though, while bigger carnivores like the ceratosaurus won’t hunt a large herbivore, their threatening presence will panic the leaf eater, potentially keeping them from visiting the watering hole or the food dispenser. Your dinosaurs will starve themselves rather than walk into a place they think is dangerous.

Keeping your dinosaurs happy is vital, not only to keep your guests happy but because an unhappy dinosaur is liable to try and escape. And we all know how badly that can go…