As a lifelong fan of both dinosaurs and management games who also thinks Jurassic Park is one of the best movies ever made, I liked Jurassic World Evolution. I liked it enough to play for almost 40 hours, complete the base game, and lovingly craft a dinosaur paradise on the sandbox island of Isla Nublar. But I often liked it in spite of itself.

It doesn’t really do management systems. Building up your dinosaur rating by adding more diverse attractions is pretty much the key to satisfying your guests and earning money, with the main obstacles to this arising arbitrarily and unavoidably – perhaps through storms that destroy your fences with uncanny precision, or, more absurdly, wilful acts of sabotage by divisions within InGen, your corporate owner, who you can’t help but annoy because of the way the game’s ‘contract’ missions work.

The cognitive dissonance of having factions from within your own organisation try to sabotage your efforts is somewhat alleviated in the new campaign, which replaces the base game’s Science, Security, and Entertainment divisions with less antagonistic quest-givers. Specifically, they are Dr Alan Grant, Dr Ellie Sattler, and John Hammond, with Sam Neill and Laura Dern returning to voice their characters from the 1993 movie. 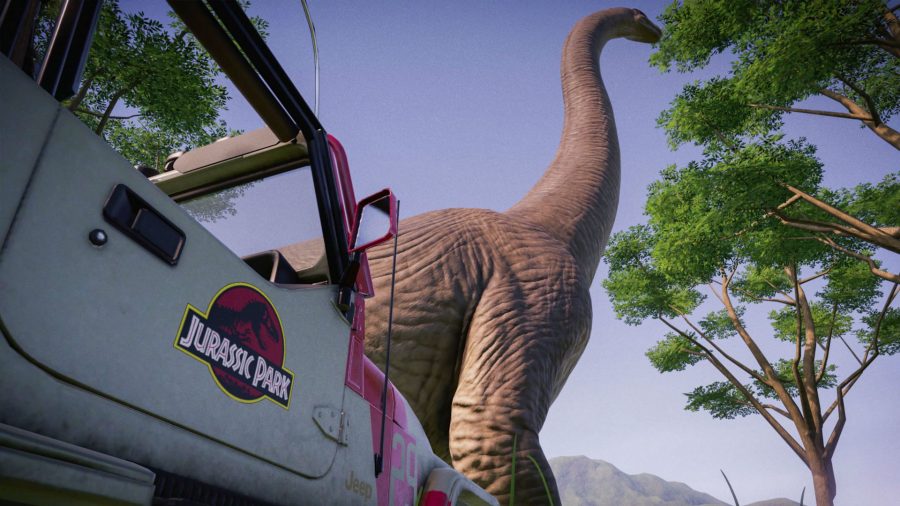 Executive producer Rich Newbold explains that the feel is more collaborative: “They’re all trying to build Jurassic Park, but in slightly different ways,” he says. If you build up your reputation with Alan Grant “you’ll get different unlocks, but there’s less of that conflict between them.” Sabotage still exists, but it sounds like it’ll lean in to the movie’s narrative of corporate rivalry between InGen and its competitor, BioSyn. Whereas in the base game, “the science division would be causing you the sabotage, in this it’s not, say, Ellie that does it” – rather, it’ll increase the chance that something external might happen.

You can finally plonk down the iconic Jurassic Park visitor centre

You’ll return to the ruins of the original Jurassic Park on Isla Nublar in an effort to get it right this time. Alongside Grant, Sattler, and Hammond, the unique Jeff Goldblum returns as Dr Ian Malcolm, as does a younger version of the base game’s Cabot Finch. It’s all capped off by a 1993 reskin that tweaks the game’s economy and various building and dinosaur models to more closely resemble the concrete and grit of the original Jurassic Park, rather than the sleek sapphire sheen of the Jurassic World reboots.

That means you can finally plonk down the iconic visitor centre, the palm-thatched concrete bunker with a T-Rex fossil in its facade, where Dr Grant “decided not to endorse” the original Jurassic Park. It contains most of the park’s essential operations – such as dispatching expeditions, extracting DNA from fossils, and genetic research – rather than split them between separate buildings. Spared no expense. 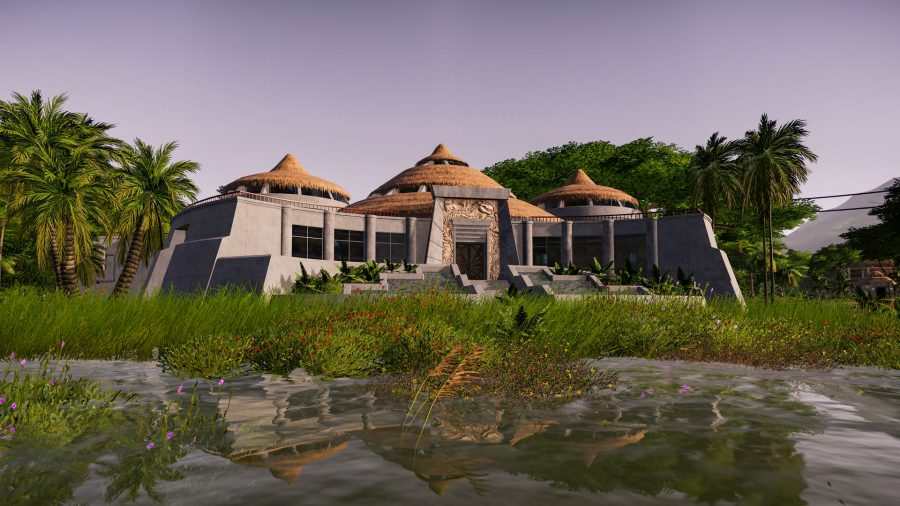 Guests no longer arrive by a monorail on the outer limits of the island, but by helicopter to a landing pad that you can place freely. This allows a lot more choice in park layout, enabling you to build outwards from a central hub rather than inwards from the perimeter.

In the campaign – following the canon – dinosaurs are hatched on Isla Sorna (“thank goodness for Site B”, as Hammond puts it in 1997’s The Lost World) and shipped to Nublar. This means you’ll order remote hatchings at the helipad, too, and have your dinosaurs air-dropped to their pens. It’s a nice nod to the lore, and it enables you to design neater, cheaper pens without accommodating a Hammond Creation Lab (though sandbox and challenge modes still use a functionally identical Hatchery building).

It’d be easy to overstate the impact of all this, however. Concentrating operations in the visitor’s centre, and guest and dinosaur arrival at the helipad makes for a more compact and flexible park layout, but that’s about it. The free patch accompanying the DLC has two more significant changes: managing the guest experience is somewhat deepened in that you now have to consider your guests’ bladder needs by supplying restrooms, though in practice this just means one more building to pop down near your shops – Newbold is clear that Frontier wants to keep the focus on the dinosaurs. 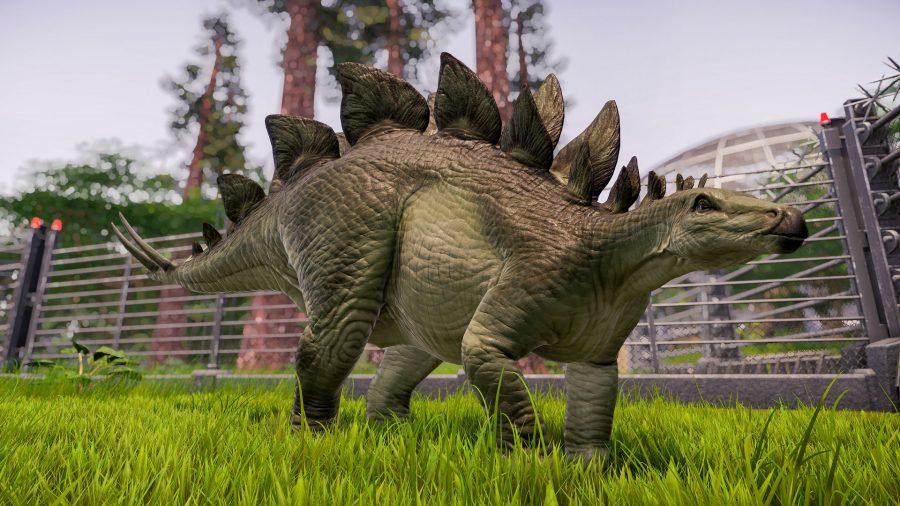 A more significant change is that ranger teams can finally get attacked by your dinosaurs. The community has been keen to see this for a while, and certainly it has never made much sense that rangers could drive up to a spinosaurus and tranquilise it without fear, when in the movies their chino shorts may as well have been stamped ‘walking velociraptor snack’. So you’ll need to keep an eye on your rangers as they tend your attractions, and fire flares to distract dinosaurs if they look like they’re getting agitated.

But because Jurassic World Evolution still throws so much other manual busywork at you – research, contracts, expeditions, DNA extraction, et cetera – I did not do this when I sent a ranger team on a tour of the park restocking feeders. They returned to base with about 7% health left and took a few moments to recover, during which time I simply sent the other team out to do the same thing. I’m glad the consequences weren’t more severe, because with all the game’s other demands, I don’t really have time to follow my rangers around as well.

As always, the real stars of Jurassic World Evolution are the dinosaurs. All of the current cast that appeared in the ‘90s get a reskin: velociraptors are brown and leathery as in the unimprovable kitchen scene, rather than the greener, smoother look they had in vanilla Evolution. Triceratops now look identical to the sick specimen comforted by Dr Grant in the movie. Together with the buildings reskin, it’s enough to produce a pleasant tingle of nostalgia – though that’s slightly undermined by the slick digital crackle and blue sheen of the UI, which remains very much in the style of the reboots. 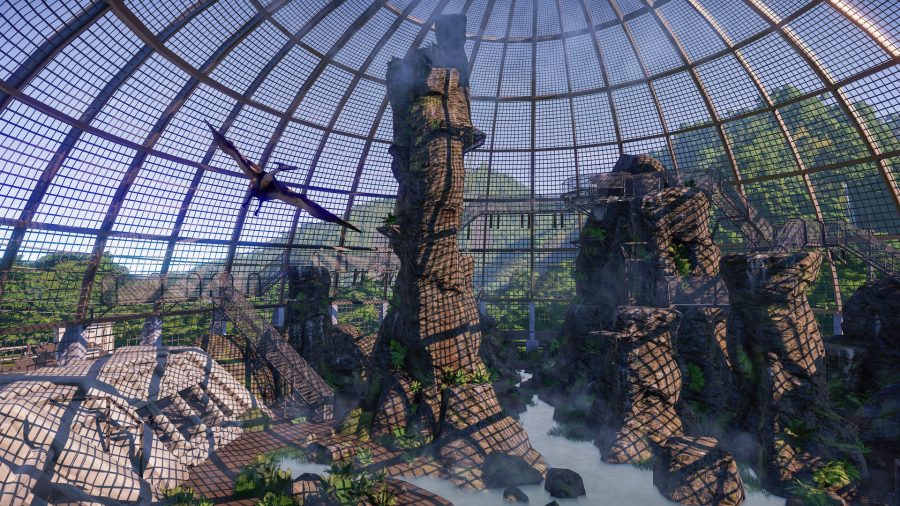 Return to Jurassic Park adds only two new dinosaurs, but they’re both significant: the adorable compsognathus (a pack of which killed Dieter Stark in The Lost World) is the smallest creature in the game yet, while pteranodons are its first airborne one. Compsognathus is a great addition: hopping gleefully about like kangaroos and with a chittering squawk, they’re distinctive and as carefully realised as every other dinosaur.

Sadly, pteranodons offer less to the game than you’d expect from the first airborne attraction. Their habitat is the aviary, which is pre-designed – there are no decisions to be made regarding its material, size, layout, internal foliage, food or water, guest or ranger access, or anything else that you’d usually consider when building an enclosure. The pteranodons themselves can only be modified with a cosmetic gene and have a maximum population within the aviary. They can escape and terrorise guests if the aviary is damaged by a storm, but not otherwise, and can’t really be considered a substantial addition to the game from a management perspective.

Really, it’s just cool to have flying creatures and the aviary from Jurassic Park III. In the session I play, I only get to look inside the aviary when releasing a pteranodon, and even then only with a fixed camera, so I barely get the chance to admire their animations. Fortunately, Newbold assures me that in the final release we’ll be able to follow them as closely as any other dinosaur.

Return to Jurassic Park is out on December 10 and will cost $20. If you’re a fan of the base game, I would say – on first impressions – it’ll be worth it: you get more of the same but with a new campaign, some slightly tweaked gameplay, and the ‘90s nostalgia all Jurassic Park fans have been craving, thanks to a closely detailed reskin and the return of the original cast. If the base experience left you a little cold, though, this expansion is unlikely to change your mind.