Head to the most northwesterly point of Medici and you’ll find a lush, verdant volcanic island. Unlike the rest of Rico’s homeland, this island has escaped the tyrannical grasp of General Di Ravello. At least it has in the fictional narrative that I’ve invented for the purpose of this feature.

And this is where I’m taking Rico to start his new life as a humble farmer. He’s had enough of tethering civilians to cows and flying c4-laden jets into oil rigs, and now wants nothing more than to live off the land in peace and harmony. However, cultivating an island for Rico and his many future wives and daughters will require agricultural machinery. And so, with the civil war raging on in the background – claiming lives, destroying families – I put Rico to work building his new home… by spending nine hours transporting a tractor across the entirety of Just Cause 3’s massive sandbox. 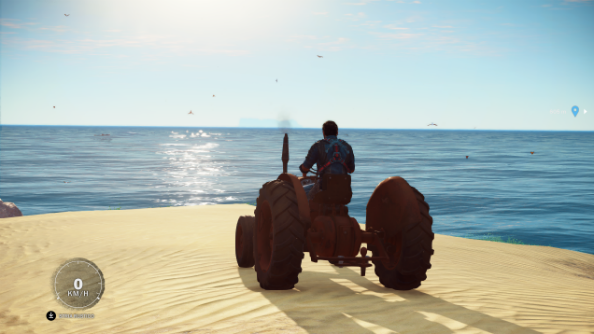 Rico Rodriguez is a simple man. He likes guns, explosions and zipping around the world with a grappling hook and tether that collectively give physics the middle finger.That’s why my first call of action was to drive poor Rico straight into the sea in an attempt to cross the 20 or so islands that stand in the way of agricultural heaven.

Things get off to a really positive start when I discover that I’m not repurposing just any old tractor, I’m repurposing The Little Tractor That Could. Surging forward into the briny depths, engine spluttering away, gobbling up underwater boulders like he’s Pac-Man on power pellets; this is a tractor on a mission.

Of course in the blinding light of progress I forget about Rico’s apparent need for breathable air. The realisation comes too far in to turn back: either Rico holds his breath underwater for the four-hour-long journey, or he gives his life to a noble and sagely cause.

Rico drowned. I’d like to believe the tractor didn’t give up so easily. 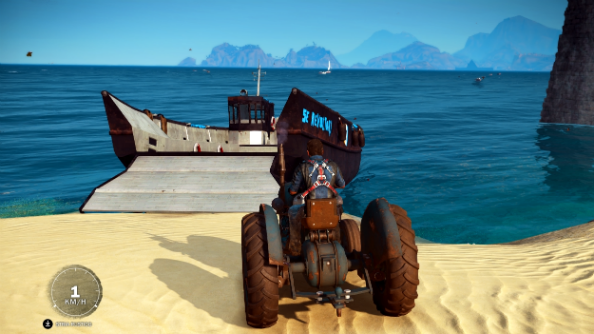 Fortunately, there are loads and loads of boats in Just Cause 3, the only problem is finding the right one for the job. Obviously, the boat needs to be big enough for a tractor, which leaves me with the option of a battle cruiser, a trawler, or a landing craft. The battle cruiser has guns, which go against everything I have intended for Rico’s new life. The trawler would make a sturdy vessel, but the collateral damage its net would do to the seafloor makes it an unethical means of tractor transportation. It would have to be the landing craft. 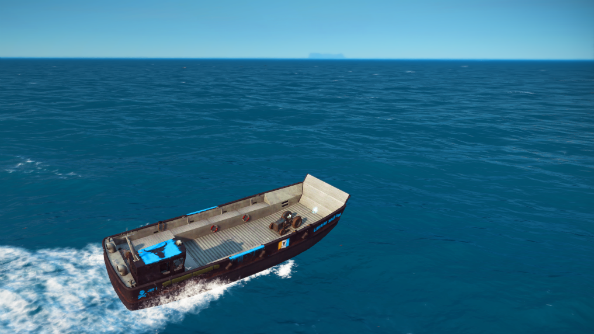 One liberated military base later (sometimes peace can only be brought about through massive, wanton destruction, as Gandhi never said) and I have the ability to magic up the landing craft at will. After some careful positioning I’m ready to lower the ramp and steer my tractor on board. A quick tether to keep it in place – because apparently no vehicles in Medici have handbrakes, despite being able to handbrake turn – and I’m ready to begin my tractor odyssey.

While the voyage is, apart from the occasional running aground, peacefully uneventful, it is also woefully constant. The ‘w’ key has become my nemesis. I pass beaches and oil rigs, but my destination does not seem to get any closer. 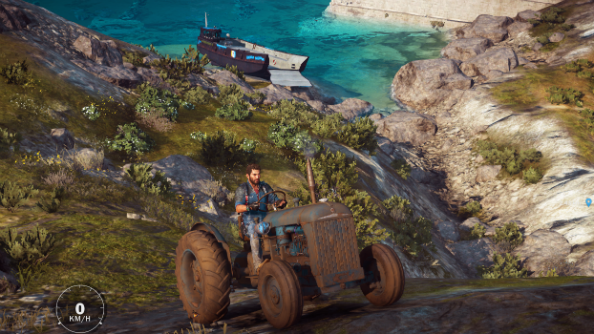 Eventually, I arrive in paradise. Getting the tractor ashore is the new challenge, for instead of finding pristine beaches I have instead found jagged boulders. My tractor tumbles off the ramp, its undercarriage now exposed. Rico spasms briefly before appearing on his feet a couple of metres away from the incident. The Voight-Kampff test question from Blade Runner about a tortoise struggling on its back and me not helping springs to mind.

Then I remember Rico’s magic tether and immediately use it to pull the tractor upright. It’s smooth sailing now. All that’s left to do is traverse the island’s volcano in search of greener pastures. Despite a top speed of about 14 kph, the tractor is surprisingly adept at mountaineering, scaling steep inclines with ease and clipping through… uh, harvesting any obstacle that stands in its way.

Soon my team near the fiery crater of the volcano. To hell with the volcano standing in my way, I’m a goddamn mountain-climbing, deep-sea-diving tractor. I am become Death, the destroyer of worlds.

Rico is burnt alive atop his noble steed. The tractor carries on unscathed.

The travel triumvirate couldn’t be complete without attempting the crossing by air. If this last attempt was to fail I’d have to resign Rico to his original mission of spreading peace across Medici through untold carnage and bloodshed. Previous experience assured me that Rico’s tether could be used to magic things to other things, therefore I decided to tether my tractor to a helicopter.

Suddenly, Just Cause 3 decides it wants to play by the physics rulebook. Tractor heavy. Helicopter small. I’m going to need a bigger helicopter.

I opt for a cargo helicopter and immediately flip the tractor upside down, snapping the magic tether, a feat I had previously thought impossible. A more gentle take-off and I’m away, soaring through the clouds, brave little tractor in tow. Compared to the first two attempts I’m quicker, more agile, free to go where I please. Within almost no time at all I can see the pristine island appearing on the horizon, the tractor still buffeting in the wind. And to think… we only had to dodge six or so missiles on the way. 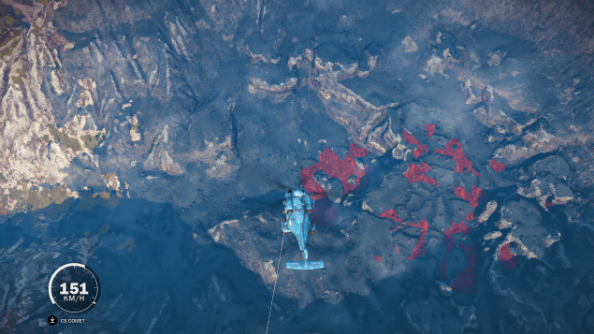 My previous tractor is nowhere to be seen – presumably it has already found a spot to begin cultivating on this idyllic island. I’m eager to set this one down and continue the search for greener pastures, but in my eagerness I make a mistake: I press ‘v’. My clumsy, stupid hands have hit the ‘release tethers’ key, and now my beloved is falling through the air towards certain death/extensive bodywork damage. Using Rico’s expert piloting skills I am able to catch a final glimpse of the tractor as it makes contact with the lava. Like in Alien 3 (or Alien Cubed?) and Terminator 2: Judgement Day, the tractor has sacrificed itself for some higher cause. Farewell, my love.

In summation: if you want to transport a tractor 30 kilometers across a Mediterranean archipelago, boat is the most reliable means. Oh! And as it turns out, you can just spawn a tractor at will if you spend a bit more time completing story missions. Brilliant.