Play a lot of Just Cause 3, as I have done over the course of the past week, and you’re soon struck by the fact that, over and above everything else, this is a game about Humean scepticism. No, wait – explosions. This is a game about explosions. Planning them, making them, watching them, being thrown into the air by them. On a macro level Just Cause 3’s iconic brand of destruction is nothing short of beautiful: enormous, billowing mushroom clouds complete with debris spilling out, this in turn beginning its own journey of destruction. It’s the stuff dreams are made of… if you’ve eaten half a kilo of Stilton and spent the evening chain-watching Arnie films.

Looking to make more mayhem? Splash about in the best sandbox games on PC.

Sadly, much like real-life, it often feels like there’s too much to see and too little time to see it in. As such, don’t waste your time with the type of firecracker explosions that would leave Michael Bay longing for something bigger, brighter… more explodey. Settle only for the very best. And what we have below is exactly that: 11 of the finest things that you can make go boom during your travels across Medici.

The sphere tank is the largest explosive object in Just Cause 3, and they can be found either alone or in clusters in a number of Medici’s military bases. Sending a couple of rockets into one will reward you with a sizeable mushroom cloud and a blast radius big enough to take a helicopter or two with it. The best place to go for some spherical doom is Porto Tridente, which is situated in the northwestern corner of the game’s largest region, Insula Striate. 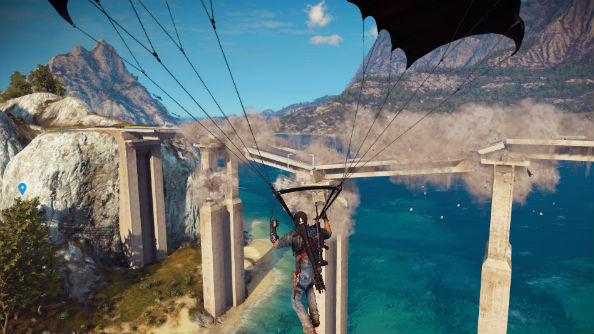 In most games, bridges are just structures that allow easy and safe passage between two points of land. In Just Cause 3, however, a bridge is an opportunity for callous, irresponsible destruction. Watch a row of cars begin to make their crossing before detonating the supports, sending sections cascading down into the waters below.

Simple, readily available near any settlement, and oh-so-satisfying to send sky-high. The humble petrol station explosion is best appreciated on foot, preferably whilst walking away and looking like a total badass. All it takes is a couple of bullets or a grenade to set the elaborate chain of detonations into motion. 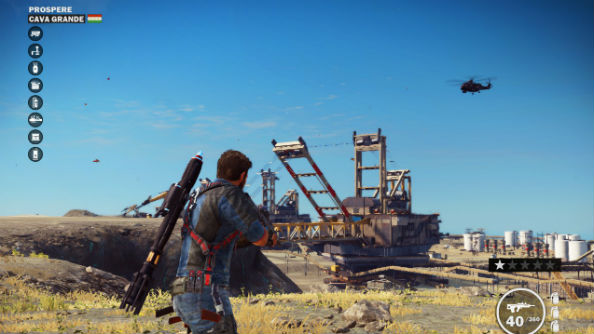 A colossal, mobile mining machine? Perhaps, but don’t let that put you off. While the main structure will remain, the arm and supports can all be taken down with a few precisely aimed explosives. I chose tank shells. You’ll find these titans of industry in Cava Grande, but more on that later. 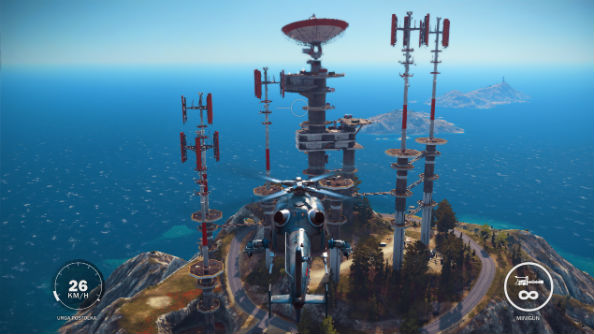 Available in a number of Medici’s larger military bases, radar spires are best exploded from a distance – this way you can look on in awe as the magnificent structure collapses in on itself before tumbling towards the floor, killing anyone below it. Radar love indeed.

This behemoth cargo plane is a bit tricky to get hold of, and will require all your tenacity in seizing the highly fortified base that unlocks it. One you’ve managed this, find a huge runway. No, bigger than that – a really bloody massive runway. Get up to full speed and take off. Find somewhere important and fly this unwieldy beast into it. Don’t forget to eject in good time for a great view of the unfolding devastation. 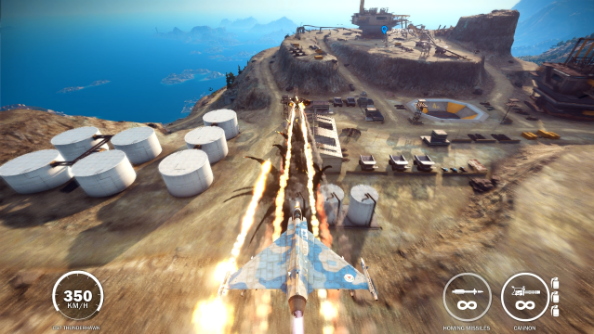 Bavarium is bad. Not only is it a made-up element, it’s also being weaponised by Medici-ruling so-and-so General Di Ravello. Cava Grande, and its neighbour Cava Grande Secunde, is where Di Ravello is mining all that nasty Bavarium, and is probably the best place in Medici to go on an explosive rampage in a tank. Bavarium storage trucks, processing plants, excavators, and fuel tanks as far as the eye can see…

The sadistic joy of tethering a baddie to a propane-bottle-turned-rocket and watching them soar towards the sun like a hapless Icarus before falling unceremoniously back to Earth is unbeatable. You’ll find these propane tanks in just about any enemy base in the game, making this ingenious act of cruelty all too easy to replicate over and over again. 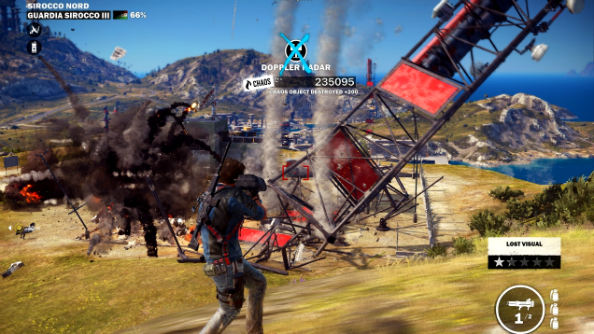 Hardly a rarity in Medici, antenna towers are infinitely entertaining to send crashing into the ground, and provide an excellent showcase of Avalanche Studios’ ability to blow stuff up real pretty like. The graceful manner in which these structures tumble downwards is mesmeric. 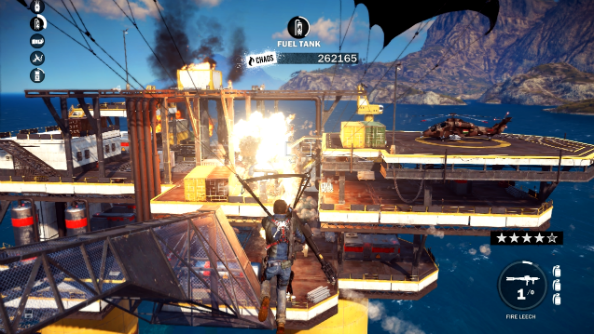 Used as offshore military bases, oil rigs are essentially floating platforms full of explosion juice. Coming across one in an attack chopper is an opportunity not to be missed.

Zooming around Insula Striate carrying missiles, jet planes and tanks, Medici’s trains are highly mobile apocalypses waiting to happen. Derailing them with planted explosives is fun and all, but you’re really onto something if you can combine the carnage of train derailments with the verticality of bridges. As seen above.

Looking forward to getting your grappling hooks into Just Cause 3? Let us know what you’ll be blowing to smithereens in the comments below.