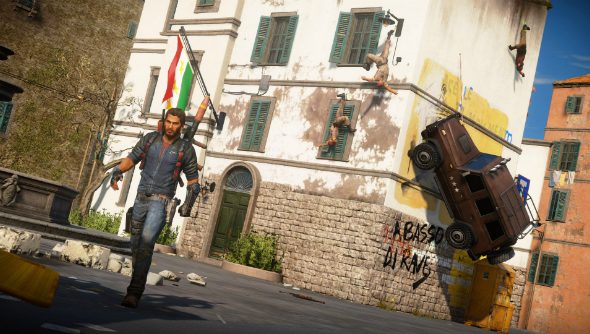 Looking for more freeform action? Get messing around with the best sandbox games on PC.

Playing as Rico Rodriguez, a kind of Antonio Banderas rendition of James Bond that’d appear in mediterranean straight-to-VHS bargain bins, you’ll hop, skip, glide and fly across the game’s ridiculously large and beautiful setting, essentially aiming to cause as much havoc as possible in order to bring about freedom (logical, right?). But it’s not all sun, sea and ‘splosions, so here are our tips to get you started.

It’s not a standard third-person shooter 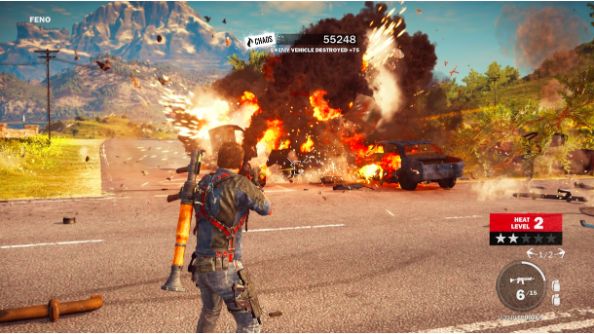 You may play Just Cause 3 from that familiar perspective, and all the controls are largely as you’d expect, but unlike in other games, Rico can take an incomprehensible amount of damage before he finally succumbs to his wounds. As such, you’re able to take on entire military complexes, large towns, and other big facilities on your own, without much worry.

At times it’s easy to forget this and be too cautious with your movements and conservative with ammunition. In reality, you can essentially go to town. You have an almost limitless supply of bullets, and providing you’re not trying to take on ten tanks with a measly machine gun, you’ll likely survive whatever the game throws at you – and even then you can usually turn the tide providing you’ve got your wits about you. 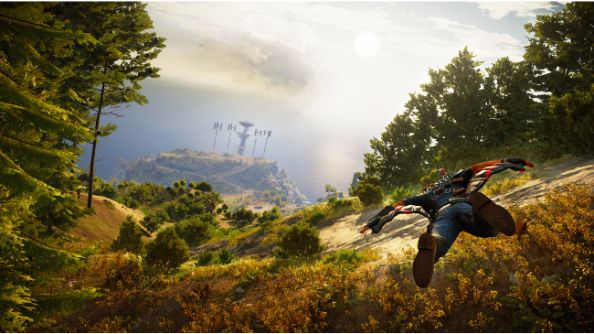 Just Cause 3’s main stroke of genius is the wingsuit – a physics-defying upgrade to your parachute that you earn almost straight after you boot up the game for the first time. The suit is ridiculous – an apparent prototype that’s effortlessly pinned onto your jacket by one of your compadres, and then suddenly becomes fully operational. Videogames!

That aside, it really is brilliant, allowing you to fly and glide unaided across the towns, forests, facilities and mountains of Medici’s several islands. You can seamlessly transition between parachute and wingsuit, tethering onto landscape and vehicles alike, stringing together moves to keep you afloat for as long as you can master.

It’s tough to begin with, though, and you have to learn the various telltale signs that you’re about to ditch into a road, or a hillside, or an ocean, or a person. Medici has many different wingsuit challenges dotted around the islands, and these are a great way of both practicing how to use it as well as earning Gears, which unlock various upgrades, but you should also just use it as your main traversal device.

Not only is it great fun to use – it’s rare that the sensation of unaided flight is put to such good use in open-world games – but you also get a much broader set of environments with which to practice your skills. Try wingsuiting between the girders of a ginormous bridge, or a set of wind turbines. It’s damn exhilarating. 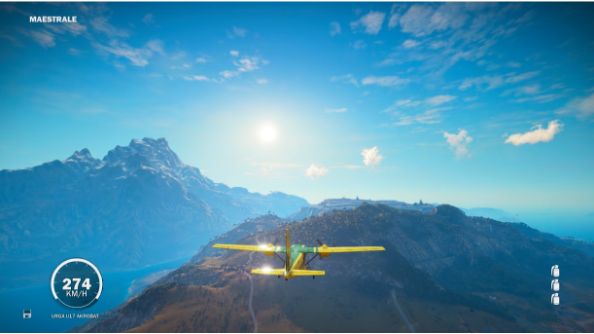 The wingsuit is fantastic fun, but to get around Just Cause’s enormous islands, or across its large bodies of water, you’ll need something a bit quicker. Complete a few main story missions and you’ll eventually unlock a fast travel system, which really helps if you need to get somewhere far away, but you need to discover locations before you can zap to them without hassle.

To map the surroundings, grab a small plane or a helicopter, and set off on a journey. Flying around Medici is beautiful, but you’ll also get a lay of the land – stop off in towns to liberate them, or try your hand at attacking a giant military base. Spoilers: you’ll probably die.

Complete side missions to unlock upgrades 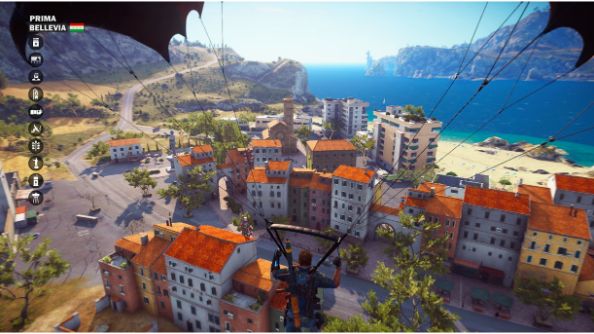 As well as taking down the regime that suffocates Medici by undertaking a ton of main missions, there are dozens upon dozens of side activities to get involved in. As you complete races, master wingsuit challenges, liberate bases, towns, airports and more, you’ll earn Gears to unlock particular upgrades to your weaponry, your driving skills, your wingsuit abilities, etc. With the amount of stuff to do in Medici, it’s definitely worth getting stuck into these.

Liberate towns by taking out the prerequisite satellite dishes, speakerphones, billboards, police stations and more to set more of the island free and to increase your abilities. The game occasionally forces you to complete them by locking off main missions until you’ve liberated a certain number of settlements, but keep ahead of the game and you’ll have much more fun experimenting with all of Just Cause 3’s different upgradeable abilities.

Experiment with your tether 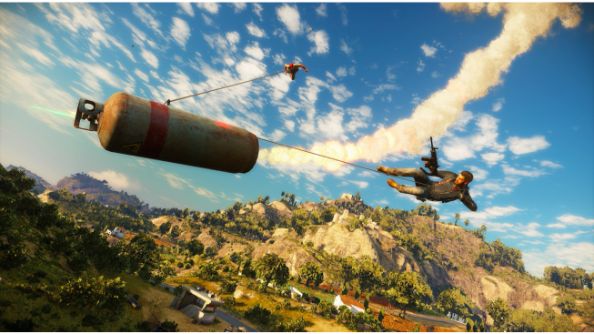 Your grappling hook doubles up as a super fun, ridiculously stupid tethering line that you can use to attach objects in the world together, and then pull them toward each other for destructive results. You get multiple tethers to muck around with as you complete side activities, increasing the maximum tension and strength of the tethers as you attach more of them onto any object.

Tether an explosive barrel to a helicopter, pull together two cars going in opposite directions, rip down guard posts, tear huge fuel containers into one another to blow up an entire complex. I spent an embarrassing amount of time strapping NPCs to trees, or to each other, or to cars, just to see how they reacted. They always died. 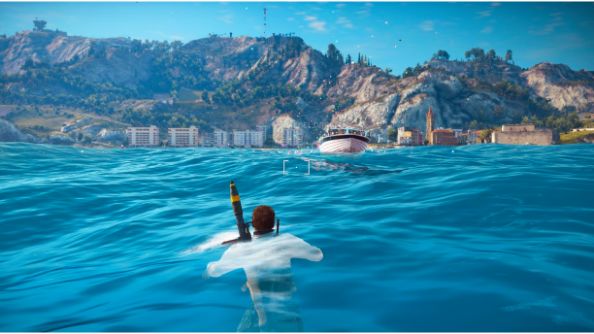 As you help the denizens of Medici overcome portions of the island, you’ll recruit new allies willing to return the favour. Along with your brother Mario, the rebels will be on call to drop guns, bazookas, cars, planes, helicopters and more to you on the island, wherever you are. Providing you’ve got a beacon grenade to call in support, the rebel drops are incredibly useful – and occasionally a lifesaver.

If you end up in need of explosives to take down a particularly tough satellite dish, call on the rebels. Stuck in the middle of nowhere and need a mode of transport? Call on the rebels. Be warned, though: there’s a cooldown on each drop, so make sure you’ve chosen everything you need before you chuck that beacon down. 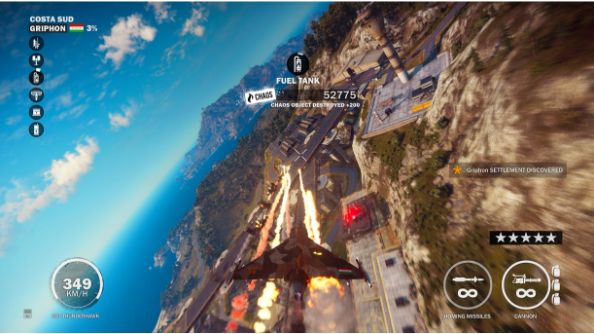 The planes you get in the early portion of the game are fun to fly, but aren’t capable of doing much – or any – damage. They’re little propeller planes, or cute sea planes, capable for getting you from point A to point B, but could they take down an entire military base? Quite. For the big guns you need to get a bit experimental, getting off the beaten track and exploring Medici to find some extra firepower.

Head north from the starting island and you’ll find much larger military complexes, as well as large air bases in higher altitude areas. Providing you can get into them without being shot to pieces by the land-to-air guns and missiles that protect them, you’ll find goodies: pilotable goodies, with huge guns and infinite missiles. Just bear in mind that you’ve got to get back out with the jet once you’ve purloined it.

Hijack vehicles to overcome the heat 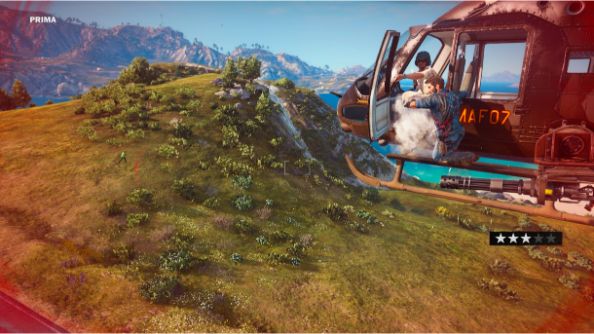 One of the best things about Just Cause 3 is how there are always multiple options for you to exploit in any given combat scenario. When you do end up picking up real heat and the regime starts sending the big guns after you – tanks, helicopters and jets – you should always remember that you’re just a couple of button presses away from evening the odds.

By tethering onto any enemy vehicle, you can zip to it and then hijack it with one button press, throwing the occupant out and taking full control. Want that helicopter to stop firing at you and start firing at the bad guys? Done. Want to shoot an enemy tank shell at all the other enemy tanks? Also done. Just Cause 3 is so damn liberating, but it takes a couple of hours to properly sink in that you’re always able to screw with enemies in ridiculous ways.

That’s the best of us – anything you’ve found out that might help out in Rico’s quest? Drop it in the comments below.