The fictional Mediterranean islands that serve as the setting for Just Cause 3 are striking. It’s the first thing I notice after emerging from the gunfight making up the game’s opening – squat villages with beautiful architecture accompanied by rolling fields, dense forests and bubbling streams.

It’s also protagonist Rico Rodriguez’s home country – presumably this is to give us a reason why the mostly-bland Rodriguez would be looking to depose yet another dictator.

The aesthetic is just a little reminiscent of Just Cause 2. But that’s not a complaint; Panau was a looker too. And it’s the scenery that ultimately pulls me away from Rico’s liberation mission during my recent hours with the game. Instead, I decide to go exploring.

Plonked several hours into the campaign, I call in a supply drop – one of the game’s new features – and a fighter jet airdrops a box full of guns directly to my location. What? You never know what might happen on a sightseeing trip… 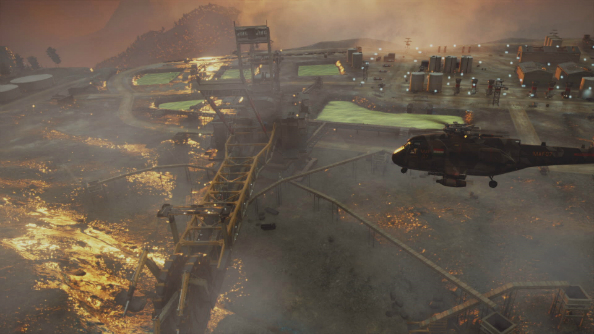 I’m just leaving the starting province when I notice my new jet has bombs, and it’s the first time in a game I’ve seen a convenient way to aim them: a red circle is hovering on the ground below me, ever present, inviting me to commence with explosions.

Remembering the video introduction featuring a bridge exploding, I decide to bomb one as I fly past it, inadvertently destroying local transport links and disadvantaging the community as I giggle away at the computer screen.

A chunk of the now destroyed bridge clips my jet as it falls, sending me spiralling into the ocean aflame. I am a terrible freedom fighter.

Swimming ashore in a coastal town, it seems the liberation mechanics work similarly to the norm for the series. There are red items littered around the town and, as red is the colour of dictatorship, destroying them in a series of fireballs ‘liberates’ the town. It’s a little simpler than just a prop hunt now, with directions pointing you in the right directions and a series of conditions to be fulfilled loitering on the left hand of your screen.

The tethering system from Just Cause 2 has returned, but each tether can be retracted with a quick press of the left trigger. Inventive players can find a variety of uses for them, but mostly I use it to hang enemy bodies off of my helicopter and slingshot explosive barrels into the distance. I was assured it can also be used to pull down statues, propaganda speakers and other destructibles, but I was too busy trying to take out other helicopters with my human wrecking ball. 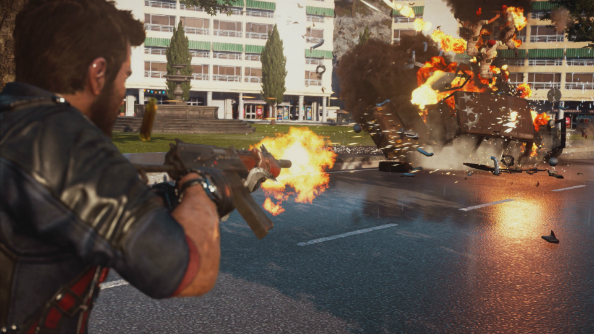 Avalanche have taken cues from a popular mod allowing you to have multiple tethers, and while you start with only a pair, with further upgrades you can have up to six. These all have a certain load they can bear before breaking, so using multiple tethers actually increases the strength of the grapple. It’s a thoughtful addition to the previous system and feels true of many of the returning features of the game: they’re the same, but different. And more explodey.

By their own admission this wasn’t the only mod that Avalanche were inspired by and, as a testament to that they’ve named their entire upgrade process the ‘mod’ system. This offers a range of upgrades from the utilitarian – like an upgrade to tether capacity – to the ridiculous: plastic explosives fitted with rocket thrusters that trigger before the main charge, propelling your target around like a rocket for several seconds before detonation.

I ditch the flaming wreckage of the plane and limp ashore on the beach. I grapple from the secluded beach up a nearby cliff before parachuting down the far side and landing on the roof of a car. The animation seems like it’s been largely polished, with clambering about looking and feeling much smoother than Just Cause 2.

My path through the second island is a bloody one as I carve across from city to city. The combat still has a few niggles – it feels floaty and I never sense that I’m in any real danger – but there are a few unique touches: the grapple hook gives you a lot of options, and if you ever do feel overwhelmed you can just take to the sky to rain down death from your parachute. 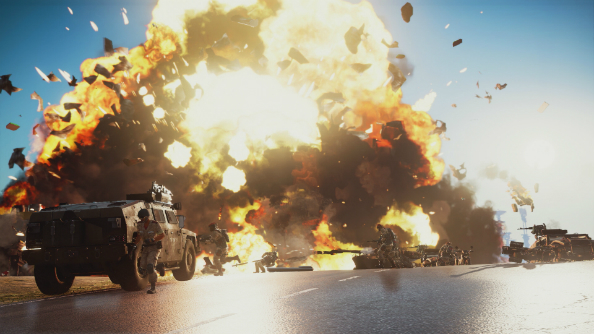 The destruction is a big step up too: Texas barriers crumble under gunfire while statues can be blown apart chunk by chunk. Cars will often shed parts like metallic confetti as the battle rages around them.

Simply put, the game is a theme park that eagerly delivers distractions in an effort to win your affection. “Look at me!” it yells, inviting you to take over a police station. “I am fun!” it whispers urgently as you tether two helicopters together and watch as they drag each other into the ocean like doomed lovers.

Stealing a nearby helicopter, I take off north towards the game’s final (and largest) island.

It’s here that you start to see the diversity to the landscape and perhaps suspend a little more disbelief. Lush Mediterranean grassland gives way to sandy desert with sweeping quarries. Flying low, I flip upside down and hug the scenery to better appreciate the view.

In retrospect, crashing into the enemy radar dish was always going to happen with the height at which I was flying. It was as I pirouetted through the air back towards earth that I saw it up ahead – a snow covered mountain range. 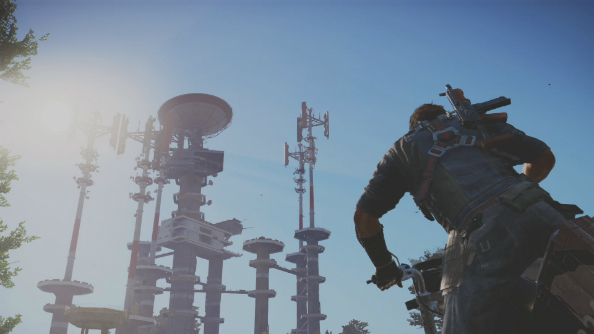 One unusual thing, noted as Rico ragdolled to the ground, is that you don’t seem to die from a fall of any height. You might get really hurt, but you can hit the ground from several hundred metres and shrug it off. Oddly, it doesn’t feel jarring at all and serves only to encourage irresponsible aerial adventures. There are a lot of different systems here, and it’s the right choice to encourage players to experiment with them.

I spend the last of my time with the game scaling the gigantic range with the parachute, grappling hook and wingsuit. Reaching the top of the mountain I can see most the island stretching away into the distance, the snowy peaks turning to sandy quarry before the ocean.

The final part of my journey is simple – after all, what goes up must come down. I sprint towards the edge of the mountain, grappling the floor for a last-minute speed boost, and catapult out into empty space, engaging my wingsuit and slowing my descent so I can watch the world pass below.

I’m excited for Just Cause 3 now. Not just for the gameplay, but because it looks to be one of the golden sandboxes that gives you not only a bunch of toys, but a world that you want to prod, poke and explore.