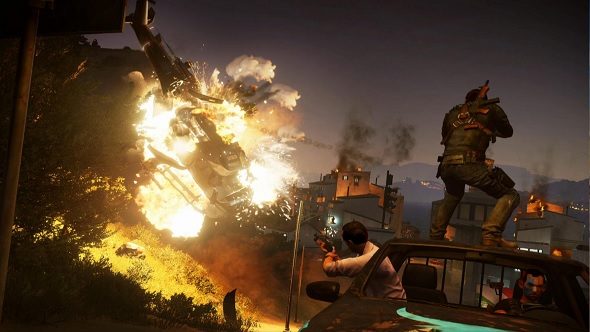 The most frantic multiplayer mode around has now been added to Steam. With a click of a button in the Steam Store, you can now add multiplayer to Just Cause 3.

Marking the occasion is this little snippet of the madness:

According to the press release, “theJC3 Multiplayer Modprovides players access to different servers, each with unique characteristics. Offering a dedicated space for fans to enjoy modes such as Team Death Match, Free Roam, Custom Races, and more!Aside from enjoying the numerous modes that already exist, those proficient with javascript, html, css etc. can also alter the game’s parameters to create their very own modes. This can build anything they like, from simple vehicle enhancements, to more spectacular creations that can alter the JC3 world entirely.”

Head on over to Steam to get the mod installed

Update July 12, 2017:Just Cause 3’s expansive multiplayer mod is finally releasing on Steam next week, letting players get together and go mad with tethers.

The mod has been available on the creators’ site for a while now, but its addition to Steam will make getting involved in the multiplayer mayhem as easy as a click.

In the mod, hundreds of players can group up on a single server to fly, boat, drive, and explode their way across Medici like a swarm of gun-toting locusts.

If that sounds like your thing, you can grab the mod from July 20 on Steam.

Nanos are no strangers to adding in multiplayer to PC ports, having previously created multiplayer mods for Grand Theft Auto 4, 5, and Mafia 3. This mod, commonly known as JC3:MP, allows support for hundreds of players to play together with minimal lag and tonnes of server customisation for those who wish to run their own unique versions of Medici.

Want to script special events where everyone’s guns shoot jumbo jets? No problem. Want to lower the gravity? Why not. Giant multiplayer mods like this are the perfect breeding ground for outlandish game modes and general chaos, so expect more than a few YouTube videos coming out of people playing JC3:MP.

In its current state, JC3:MP must be downloaded via Nanos’ website, with future versions of the mod potentially coming to Steam. There are no extra system requirements for running JC3:MP compared to the single-player, but expect some slight lag if you enter a server where everything is timed to explode. If you do experience any problems with running or connecting to a server, check in on Nanos’ community forum to see if there is a fix.