In the latest developer diary from Avalanche we get to hear the developers talk about Just Cause 3’s world. Guess what: it’s big. The video begins with a bunch of developers sounding like they’re dropping innuendos, but they’re actually talking about having a really big map. Hur, hur.

The video shares some lovely insight into the world’s creation. The developers wanted the world to have some traits in common with Rico, so much of the landscape is scarred, ruined and craggy. There’s also plenty of verticality, with tall buildings and cliffs looming over villages – anything to provide an opportunity for you to survey the beautiful vistas from up high and heroically swoop in with your wingsuit to blow some shit up. 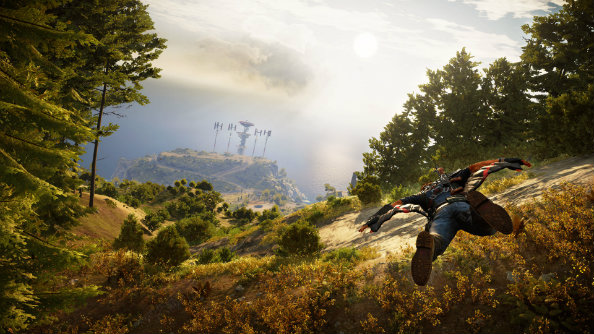 Just Cause 3’s map with be anamalgamation of the best parts of North Italy, Corsica, Southern France, Greece and Spain. The first region will be peppered with towns – some wealthy, some poor – and surrounded by rural areas ripe with agriculture. Region two meanwhile will be full of military bases, fishing towns, ruins and rebel bases. Region three is described in the video as the “Game of Thrones region”, complete with mountains, forests and a giant wall that divides the country.

Alongside the usual series cornerstones of massive explosions, impossible stunts and improbable draw distances, the developers have apparently taken inspiration from Just Cause 2’s modding community for some “of the more crazy ideas”. With this in mind, the toolset has also been expanded and the team hopes that modders will be able to create even more impressive mods and expand the life of the game beyond what Just Cause 2 achieved.

I can’t wait to get my hands on it when it launches on December 1.