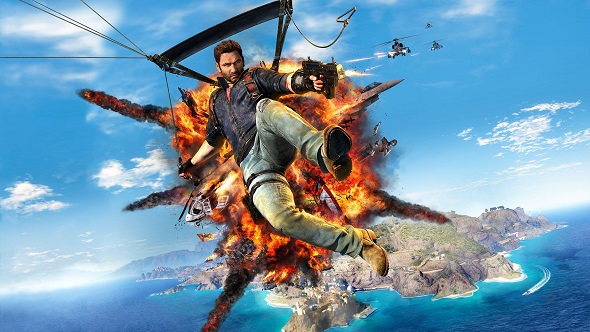 Yet another Square Enix property has been optioned for a film adaptation, according to a report from Deadline Hollywood today. Following the announcement of a Sleeping Dogs film last weekend, it has been revealed that Aquaman and Game of Thrones star Jason Momoa will feature as Rico Rodriguez in an adaptation of Just Cause.

For sandboxes of all stripes, check out this list of the PC’s best open world games.

Adapted by John Collee, the screenwriter behind Master and Commander, Happy Feet and The Legend of Tarzan, the Just Cause film is set to be directed by San Andreas director Brad Peyton.

Plot details are scant at this time, but the movie is planned to deal with Rico Rodriguez’ crisis of conscience while on a mission for the Agency. The Just Cause franchise is not exactly known for its riveting plot so I’m definitely looking forward to what kind of tone the film ends up going for; whether it goes full on action or it takes the action comedy route.

Seeing as Just Cause is famous for its madcap, sandbox action where Rodriguez can attach soldiers to propane canisters and shoot them into space, the tongue-in-cheek route is probably the best option. The SFX budget for this adaptation will no doubt be enormous, as most games of Just Cause end up with the player blowing up billions of dollars worth of a country’s infrastructure.

With Peyton set to go into production on Rampage within the next few weeks, I would expect that this adaptation would start filming in late 2017 at the very earliest. The film industry is going whole hog on videogame adaptations at the moment, as film adaptations of Kane and Lynch, The Division, Tomb Raider, Sonic the Hedgehog and a Netflix animated series for Castlevania are all in the works. Tune in next week for news on a film adaptation of Farming Simulator ‘18.