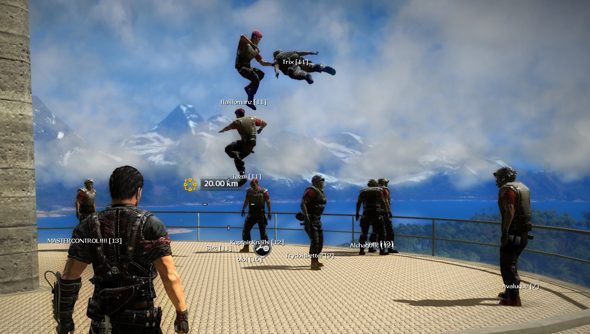 Why won’t Avalanche’s new open-world grapple-chuter release with multiplayer? Just ‘cos. Wait, sorry, there is a real story here.

The Just Cause 2 multiplayer mod finished last year fulfilled players’ primal need to be seen hurtling through the jungle tied to a propane canister, and become one of a handful of mods with its own Steam page.

Thanks to some cannily-timed discounts, it also gave its base game a second wind. But Avalanche won’t be following their community’s lead for next year’s Just Cause 3. Not yet, anyway.

“The mod is absolutely fantastic,” Avalanche CCO Christofer Sundberg told Game Informer. “We owe those guys a lot. They have actually supported the game and helped it stay alive so many years after it was released.”

Sundberg said Avalanche weren’t relying on their community to build Just Cause 3’s multiplayer for them – but “at some point you have to make a choice on where your focus is”.

“Our strength is the sandbox experience, and we want to deliver a great Just Cause 3 experience,” he said. “Maybe some time down the line, we’ll take Rico into the modern world of multiplaying.”

More than a year before it graced Steam, the Just Cause 2 multiplayer mod was hosting 1,300 players at once in server tests. Let’s hope Avalanche can spare more than a skeleton team for post-release development on Just Cause 3, eh?