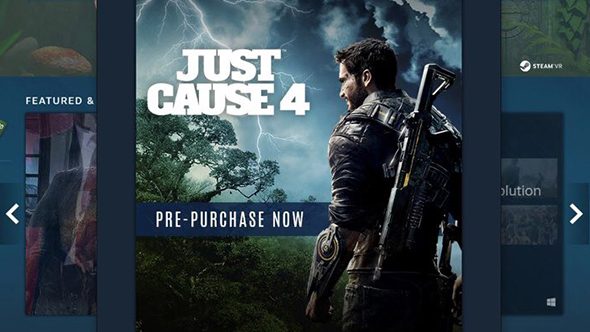 Just Cause 4 is on the way, as one leak springs on the good ship we’re sailing into E3. A Steam promo image popped onto the service earlier this evening, revealing the fourth entry in the series of sandbox explosion simulators, which is likely scheduled for a proper unveiling next week – unless Avalanche, like so many studios in the past few weeks, shrugs at the leaks and does their reveal early.

There’s little to glean from the promo, other than the apparent return of Rico Rodriguez as the protagonist. Rico appears to be equipped with the series staple grappling hook, as well as an assault rifle across his back and a shotgun at his side. There’s also a storm happening, which could either be cool promotional imagery or a hint at an in-game weather system.

Some games are announced before being revealed to the world. For details on those, check out our list of upcoming PC games.

For early rumours of release dates and multiplayer, click here to catch up on everything we know about Just Cause 4 so far, and everything we wantto see.

In related news, Avalanche (intentionally) revealed another upcoming game earlier today, the self-published 80s-style robot shooter, Generation Zero. Also of note is the fact that Just Cause 4 was part of the Walmart Canada leak last month – as was a new Assassin’s Creed and Rage 2, the latter of which is partially in development at Avalanche. (Bethesda, incidentally, still holds a little joking bitterness for that.)

Maybe this means there’s hope that a new Splinter Cell could be on the way after all. We’ll find out for sure next week at E3, likely along with further details on Just Cause 4, assuming it doesn’t all leak beforehand.