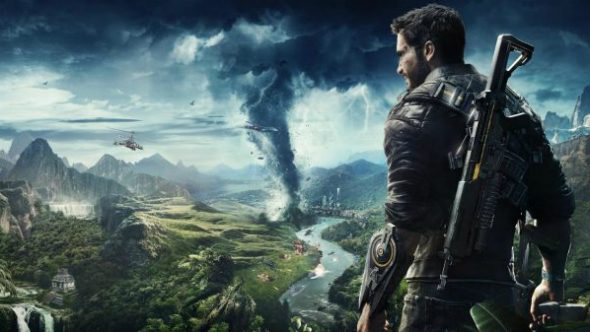 The tornadoes that you may have seen rampaging across the map in the the new trailers for Just Cause 4 have been developed with proper aerodynamics in mind. In an interview at E3 2018, game director Francesco Antolini revealed that developer Avalanche Studios added “a new layer of physics” to the game.

Just Cause 4 will introduce a new weather system to the series, with a different extreme weather event for each of the game’s four biomes. The Alpine biome will be beset by blizzards, while you’ll have to deal with sandstorms in the desert and lightning storms in the rainforest.

From launching rockets to launching cows – here are the best sandbox games on PC.

In the grassland biome, however, you’ll have to deal with tornadoes, which Antolini says can be thought of as either “a black hole that can swallow enemies, or as a wind raft.” That second option means that if you’re driving and stray too close to a tornado, you can jump out and use your car (or your wingsuit) to ride the winds.

Introducing all that wind meant that some new physics challenges for Avalanche, including “proper aerodynamics.” According to Antolini that means that “the shape of the objects changes the way that they interact with the wind,” so if you’re trying to surf on top of a sports car you’ll probably have an easier time than if you’re riding an RV.

You can check out a gameplay trailer below:

The Just Cause 4 release date is December 4, 2018, so it won’t be too long until you can head to the game’s setting – the beautiful but chaotic South American country of Solis.