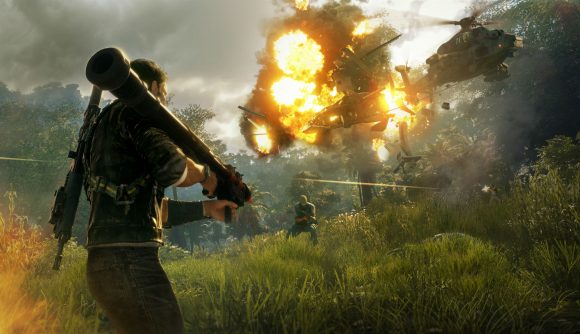 There’s a short list of things you want in a new Just Cause game, and most of them are explosions. Okay, explosions, car chases, a wingsuit, maybe a missile or two, and Rico Rodriguez generally being a badass. You’ve got all that and more in the latest trailer for Just Cause 4, which you can see below.

The trailer, which has just debuted, is another action-drenched look at the fictional South American country of Solis, which is home to mountains, insane weather, and a grouchy mercenary army called the Black Hand. Our hero Rico shows up to clean up the place and liberate the population, but in Just Cause 4, he’s also a bit of a tornado chaser, as the massive weather systems can plow through areas and cause almost as much mayhem and damage as Rico can.

Just Cause 4 is doing some interesting things with the series “blow a lot of stuff up” formula. As with the third game, here you’re trying to take back territory from enemy forces, but in Just Cause 4 you’re doing it by helping a group of rebels. There’s a constantly-shifting front line between the Black Hand and the rebels, and the two sides can be found all along it, shooting the snot out of each other.

There’s more, too – developer Avalanche explained to us this week about how Just Cause 4 lets you build vehicles out of just about anything using the game’s snap-together building system. There’s a lot going on in Just Cause 4.

But for now, check out this brand new trailer:


The Just Cause 4 release date is early next month, which gives us a bit of time to prepare ourselves for yet another round of freeform destruction, creative use of explosives and grappling hooks, and potentially flying a deranged version of Chitty-Chitty-Bang-Bang into a tornado. Why? Just ‘cause.