Just found yourself let loose in Just Cause 3 and don’t know what to do beyond wingsuiting around and exploding things over and over again? How about unlocking an enormous transport plane that can hold up to ten vehicles and fly through antenna towers without taking any apparent damage? Thought so.

Grab yourself a fast vehicle such as a speed boat, helicopter or plane and make your way straight to Just Cause 3’s largest landmass. Once there, you’ll want to find and seize Falco Maxime, the most challenging base in the game – not that anything’s too taxing when you’re Rico ‘looks-at-things-and-they-explode’ Rodriguez. 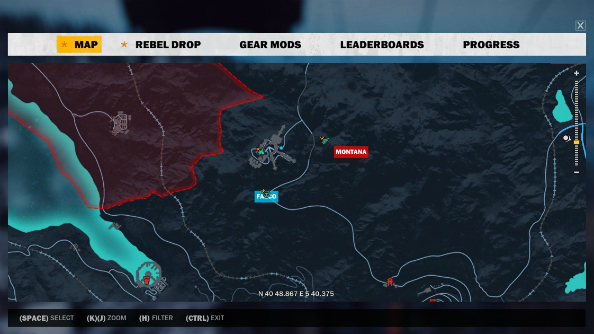 The base is perched high in the mountains of the Montana region and should be approached with utmost caution (and a little bombast for good measure) owing to the site’s pinpoint accurate nuclear defensive system – approach too slowly and you’ll be knocked out of the sky by a missile. This being Just Cause 3, you can take a couple of these before dying, so you’ll need to scramble to cover beneath Falco Maxime’s numerous platforms. Herein lies a nifty method for taking the super fortress at such an early point in the game…

Using the base itself for cover, steer Rico around the facility using the constantly firing nukes to destroy every chaos object topside. It’s a bit of a guessing game, and all too easy to get killed, but success results in you being able to spawn the game’s biggest vehicle at will. 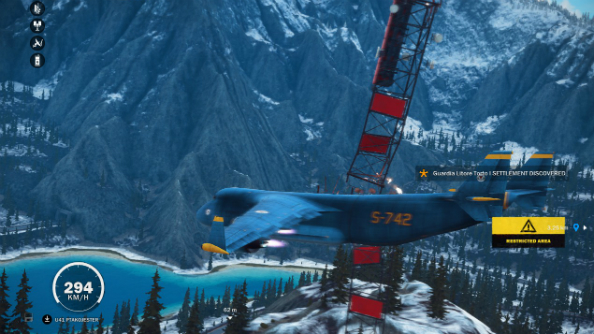 Once everything in the base is destroyed you’ll have unlocked the flying behemoth in your Rebel Drop List, meaning you can have it sent to your location for whatever explosive scheme you’ve put together.

What’ll you be using the U41 Ptakojester for? Transporting a whole bunch of tractors, flying into bridges or even some graceful aerial acrobatics? Let us know in the comments…