Just Cause 3 has launched, not up into the air with a fancy parachute, but on PC, where you can buy it now. But should you, given that you might already be weeping every time you look in your post-Black Friday and Christmas shopping wallets and purses? Read on for our Just Cause 3 PC port review to find out.

If you’re looking for our full impressions of the game, mosey on over to our Just Cause 3 PC review. 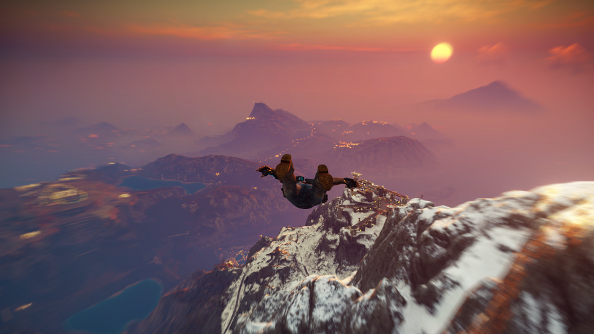 Avalanche’s previous offering on PC was the superbly optimised Mad Max, a game that was both absolutely gorgeous and fat with PC-specific options to play with. It ran like a dream, was mostly free from bugs, and while the game itself didn’t break any new ground and perhaps played it a bit too safe, it was a lesson in how to do a PC port.

This makes Just Cause 3 a bit less impressive, but only just. It is undeniably a gorgeous game, but is absent Mad Max’s impressive art direction, leaving us with an extremely bright, colourful game that mostly looks like pictures out of a (really violent) holiday brochure. Though the vistas impress, many of the locations are left looking rather mundane, with towns and cities having little in the way of personality.

Avalanche recommends an Intel Core i7-3770, 3.4 GHz, AMD FX-8350, 4.0 GHz or equivalent CPU, with 8GB of RAM and a GTX 780 or AMD R9 290 GPU for the best results, though there are enough options so that, even if you don’t hit the recommended specifications, you should still be able to both play it, and enjoy a fair amount of eye candy. As you can see from the specs of the machine I tested Just Cause 3 on, I hit everything other than the CPU, yet I had no trouble getting the most out of the game. 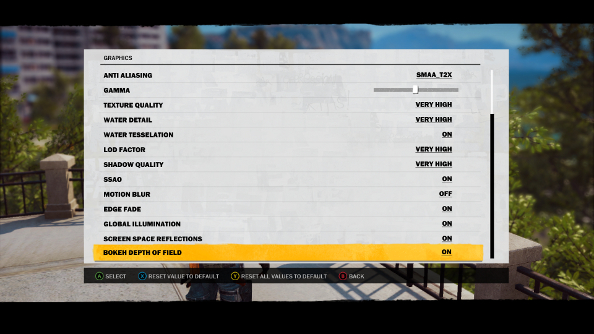 Just Cause 3’s PC-specific options are not quite as varied as Mad Max’s, nor are there any presets, meaning that you’ll need to fiddle a little bit more to find that sweet spot. Water, texture and shadow quality can be tweaked in various ways, and a few extra bells and whistles have been added, like Bokeh depth of field, space screen reflections, bog standard SSAO, global illumination, LOD factor, edge fade and of course anti-aliasing and anisotropic filtering. The AA options are FXAA, SMAA and SMAA T2X.

There’s nothing too fancy, though I do commend the consistency of the various options, which are either set to on or off, or very high, high, medium and low. That’s one thing Mad Max didn’t have, with some settings only going to high, and many not going below ‘normal’, whatever that means.

One omission that has bothered me, and it’s not something I usually mind in third-person games, is the lack of an FOV slider. Unlike, say, GTA 5, Just Cause 3 has a fairly limited camera, so you can choose from different view distances. This is a slightly problem because the camera keeps quite close to Rico – he’s got a magnetic personality – or whatever vehicle he’s bundled himself into. Either an FOV slider or more camera options would have been greatly appreciated. 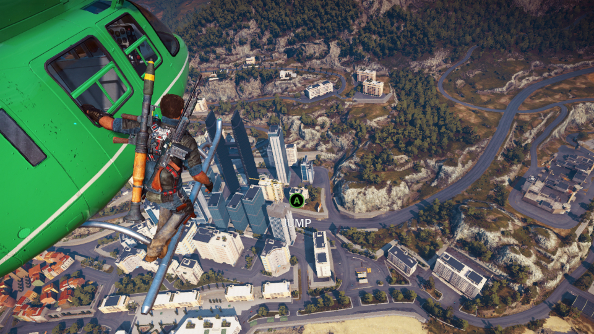 At max settings, with everything turned on or set to very high, using SMAA T2X and 16x anisotropic filtering, things are surprisingly smooth. A consistent frame rate of 60 was easily attainable, with it only dipping to the high 50s when the explosive carnage reached its peak. The AA is, admittedly, a bit disappointing, with jagged edges being constantly present, especially on objects in the distant, but otherwise the game looks lovely.

There’s no frame rate cap available in the options, unfortunately, so if you want a stable frame rate you’ll need to turn on v-sync in your GPU settings or using the in-game graphics menu. Without v-sync, I was getting a frame rate of around 70, fluctuating between high 60s and mid 70s.

One word of warning: turn off motion blur. Whatever your opinions of it in general, it’s particularly awful in Just Cause 3. Not only are some users and reviewers reporting performance issues with it turned on, it also does weird things like this: 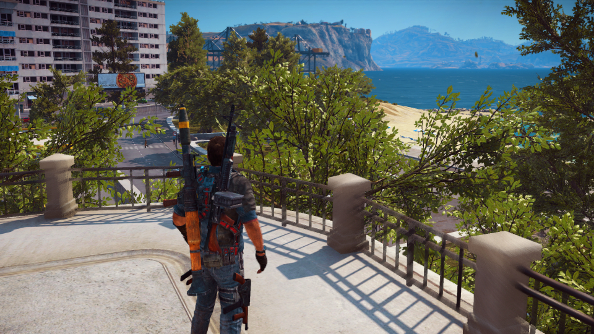 Switching it off reverts everything back to normal immediately. 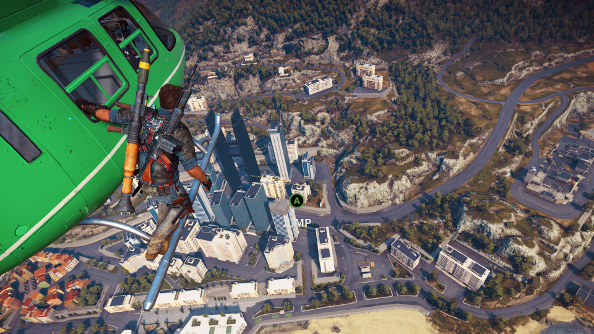 It’s hard to tell the difference between high and very high. Without presets, I turned things like texture quality, water detail, shadow quality etc down to high, while keeping SSAO, global illumination and most of the other options turned on. AA was reduced to SMAA, and I knocked anisotropic filtering down to 10, from 16.

With v-sync on, there’s no frame rate difference either, since I was already getting a stable 60fps on very high. Turning that off, however, adds about ten fps, with it fluctuating between 80 and 90, very occasionally dipping down to the high 70s when the screen is filled with action and gargantuan explosions. 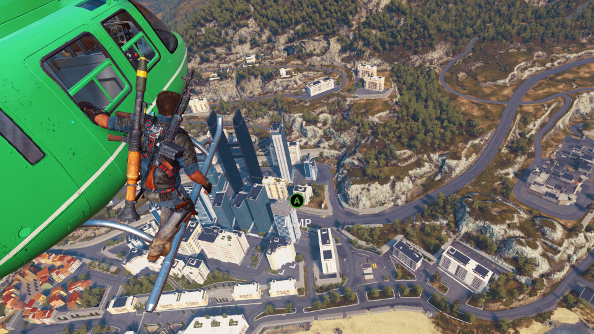 To simulate a medium preset, I turned off many of the bells and whistles, while reducing AA to FXAA and anisotropic filtering to 8. With this, we can start to see a noticeable reduction in fidelity, creating a flatter, more lifeless image. Despite the reduction in quality, the game still has the ability to impress, and as you can see from the screenshot, view distance is not noticeably affected, it’s just a tad less detailed, and shadows in the distance are now greatly reduced. This is most obvious when looking at Medici’s lovely flora.

The performance gains are considerable, with the frame rate now being at an average of 120fps, fluctuating between 115 and, in some rare cases, 140. This is mostly thanks to options like global illumination and SSAO being turned off, as well as the shift from SMAA to FXAA. 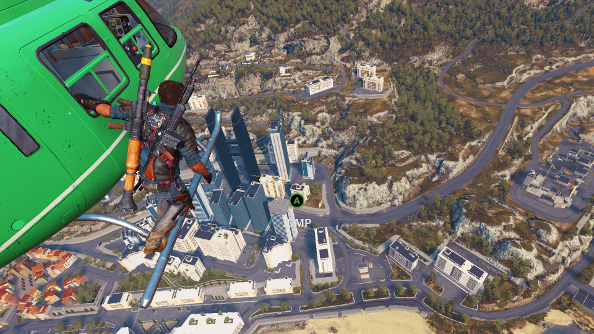 And here we see Just Cause 3 at its worst, which, I’m sure you’ll agree, is not bad at all. The most obvious difference between this and medium is the continued reduction in shadows, but not to the point where the game feels entirely flat. Though I’ve played 50 hours of the game on its highest settings, spending 30 minutes messing around with everything turned off didn’t particularly faze me. Indeed, in motion, the reduction in quality isn’t even incredibly noticeable. The explosions still look lovely, the view distance is still impressive, and Medici still looks like the sort of place I’d love to go on my holidays.

The performance increase isn’t quite as significant as it is between high and medium, though there’s still a bump. With v-sync off, the frame rate averages out at around 130, with it bouncing between 120 and 140.

In all of the images above, you’ve probably noticed that the helicopter looks pretty much the same across all of them. Less detailed textures don’t take much of a hit when the texture quality is turned down, but it is more obvious when looking at buildings. Below you can see the difference more clearly between very high and low. 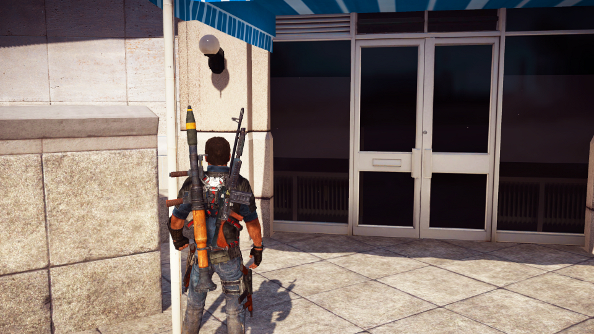 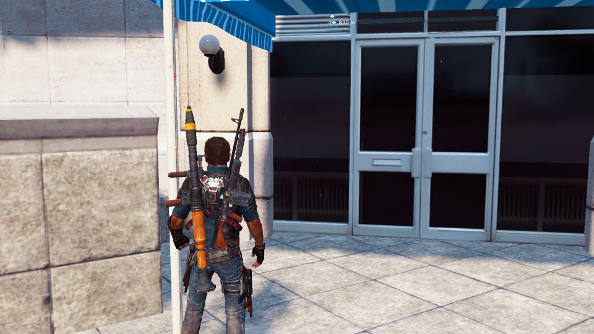 Just Cause 3 has full controller support as well as mouse and keyboard support, though I would suggest the former. Action games just feel more natural with a gamepad controller, and it seems clear that the game was designed for it, with mouse and keyboard requiring a wee bit of finger gymnastics.

That said, at least mouse and keyboard controls are customisable, outside of a couple of options like the UI controls, which are mostly locked. This is not the case if you’re using an Xbox controller, for instance. Not only are the controls not customisable, there aren’t any presets to choose from either. You’re stuck with what Avalanche decided was the most optimal scheme.

Throughout my rather long time with the game, I’ve encountered very few bugs and no performance issues. The worst problems have been the previously mentioned motion blur bug, which is easy to fix, and occasional flickering affecting specific surfaces, which is both rare and fleeting. Unfortunately, I’ve been unable to figure out what causes the flickering, because the moment I go into the menu to change the settings, it goes away. I did notice, however, that playing on the lowest settings, which I did for 30 minutes, stopped it from showing up, so it’s definitely related to a specific option. 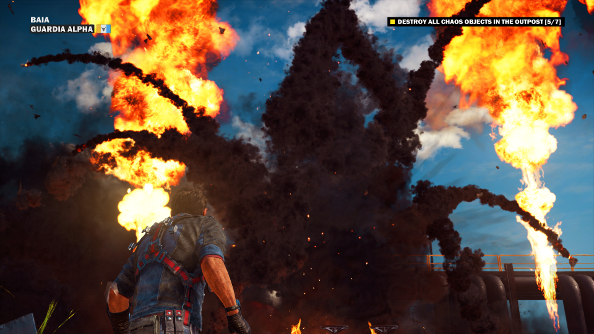 Users and reviewers have reported crashes, bugs with the water and memory leaks after playing for a couple of hours. This seems to be affecting AMD users the most, though not exclusively. Beta patches have been rolled out that might fix some of these problems, though I have been unable to test this, as I have encountered none of these issues myself.

Just Cause 3 isn’t quite the perfect PC port that Mad Max was, but it’s a perfectly competent one. While I’ve had a smooth experience, however, it’s impossible to ignore that this hasn’t been the case for everyone. Once upon a time I would have recommended waiting a week for some fixes, but with Steam refunds now being very simple, I see no reason why you shouldn’t test it out for yourself right now.