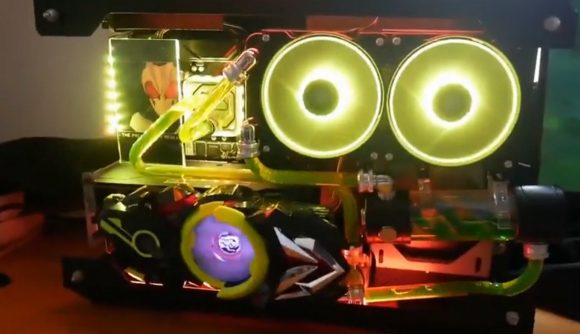 It’s also every excessive enthusiast’s dream. If you ever played with action toys when you were younger, this build will probably reignite some deep-rooted nostalgia and love for all things flashy and plastic. It’s the sort of thing every child of the ’90s that was into Hollywood hacker culture pretended to own, although they probably never thought they actually could.

It all starts with an idea. A beautiful, terrible idea. The sort of idea dreamed up by those mad scientists that are willing to push boundaries in the pursuit of the weird and wonderful – sat hunched late into each night, spider-like fingers sprawling manically over cryptic papers, darting between half-emptied coffee mugs. Then, one night, a ‘eureka!’ and a dash to the test bench to bring to life their glorious monstrosity.

That is how I picture Reddit user Kirakyou beginning their Kamen Rider Zero-One themed PC build, because it must take a mind like that to even come up with the idea: combining a toy Kamen Rider Zero-One driver with a PC build and theming the rest of the build around it. However it is that they came up with the idea, I’m glad they did, because the result is magnificent.

First of all, what it is. Kamen Rider Zero-One is a Japanese TV series featuring humans that can turn into Kamen Riders, plated in metal. To undergo this transformation, they use a ‘driver’, a device that takes centre stage in Kirakyou’s PC build. The driver itself is touched by a separate device (the ‘Progrise key’) to authorise it, and then the key can be flipped open and pushed into the driver to activate it.

Once the key is pushed in, the driver snaps into its activated mode, and (so goes the TV show) transformation into a Kamen Rider can begin. In this PC build, however, booting the PC takes the place of Kamen Rider transformation, so that when you push the key fully into the driver, the PC boots up while the driver continues to make its tinny Progrise transformation sound effects.

Unless some off-camera trickery is happening (say, the manual jump-starting of the motherboard) then there’s most likely some hidden magic going on behind the driver. In order to boot a PC up, the circuit between PWRBTN and GND header pins must be completed. This can be achieved by simply placing a conductive material over both header pins, and is essentially all that is happening when you press the power button if the cables are all connected properly.

My guess is there’s either some off-camera manual power button pressing going on, or Kirakyou has rigged the driver toy to create conductive contact over these two pins – the driver is certainly in the right place for this to be the case.

Apart from the driver, the PC itself is built face-on in an open chassis, leaving all its innards on display. It’s difficult to see exactly which components are being used, because luminous yellow-green custom loop piping and similarly-lit fans cover most parts of the build. What the build’s specs are isn’t quite the point, though, is it? The point is that this is a seriously cool, and utterly excessive, PC build. Definitely not one for minimalists like myself, but we can at least appreciate its glory from a safe distance.