Hello! I’m in Iceland for EVE Fanfest 2014. I’m eating a croissant and looking at a mountain. I’m listening to Sigur Ros and crying. I have eaten a puffin and a whale. The hot topic of the day however is very much spaceships, and to that end CCP have just dropped a steaming load of EVE Valkyrie news.

Here’s what they’ve said. The first-person, virtual reality cockpit space shooter has been migrated from the relatively ramshackle environment of the Unity engine to the even glossier Unreal Engine 4. The latest build boosts the choice of ships from “one” to “more than one”. And the game’s main character, the leader of the Valkyries herself, will be voiced by none other than Katee “Starbuck” Sackhoff. Her out of Battlestar Galactica.

When I’m not destroying puffins, I’ve been playing the latest build of EVE Valkyrie on the most recent iteration of the Oculus Rift. It now supports full head tracking, which means that not only can you crane your neck every which way, but you can lean forwards and sideways and have your virtual avatar do the same.

That may not sound like a massive deal, but previous versions, in which your head position remained static, felt uncannily like a sort of spacey paralysis. Oculus Rift Dev Kit 2 brings the cockpit to an entirely different sort of life, allowing you to investigate it thoroughly from different angles by moving your torso around the virtual space. You can even pop your head between your legs for a cheeky glance at your own polygonal crotch, though it feels disconcertingly massive up close, about the size of a beach ball.

The Oculus Rift achieve its head location trick by placing a small camera about five feet in front of you, a small camera that a serious man told us not to touch as only 17 of them exist.

Here’s a massive picture of Katee Sackhoff’s face, which is only a little less unsettling than the wrongsized crotch. 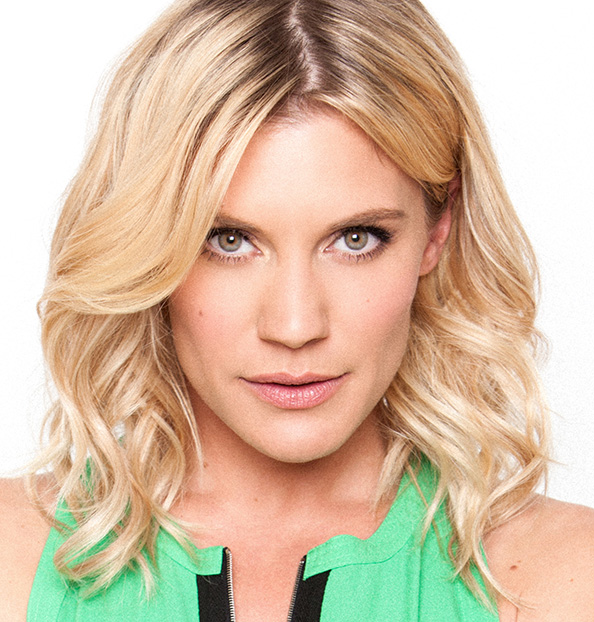 The game itself has improved immensely since I last played it. Head tracking isn’t simply a novel Oculus trick, rather it allows you to lock on to enemy fighters by glancing over your shoulders or straight up and out of your windshield. The interface has been overhauled with the engine change and now indicates lock-ons with five satisfyingly bleepy pips, which fill up as each missile primes for launch.

As targets careen about the space arena they slip out of view, their reticule floating around your lap and the floor of your craft as they take their evasive action. Rolling your ship and keeping opponents in sight by physically looking for them is key to successfully exploding things, while hammering X to deploy countermeasures is key to not being exploded.

It’s a straightforward thing, EVE Valkyrie, but it’s slightly magical to experience, a dizzying spacecoaster ride that is for now exclusive to anybody who can get near a virtual reality hat. That’s the saddest thing about poor Valkyrie, that it’s all swaddled away behind its arcane technology, a game that spiritually belongs in an arcade. You can play it if you’re here at Fanfest, and you can’t if you’re not, which seems will be the case for the forseeable future.