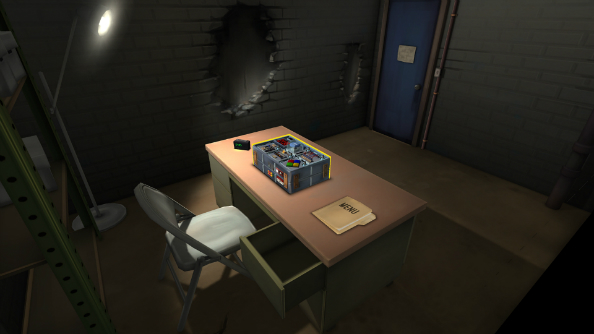 Bomb defusal, like adult entertainment, is one of those jobs you’d like to be able to say you do, without having to deal with the grim reality of it. Sure, you get a t-shirt that you can – nay, must – wear at your student union. But look, even Female Body Inspectors get those these days, and they don’t have to worry about eviscerating their coworkers with a lapse in concentration.

Keep Talking and Nobody Explodes, a VR bomb defusal co-op game from Ottowa-based Steel Crate Games, lets you live that dream in a safe environment. And of all the Oculus Rift titles I’ve experienced throughout my exploration of VR, this is far and away the most enjoyable.

There are plenty of explosions in our best PC strategy games. You like those, right? Yeah, you love an explosion.

What do you need to play it? 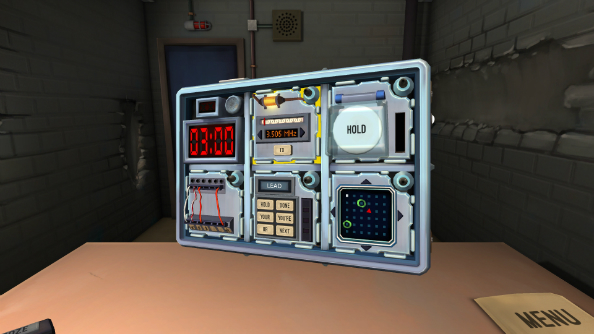 Actually, not even a VR headset. Although KTANE is designed for VR, it isn’t a requirement. The core idea is that one player is the defuser, controlling the game and describing what they see to the defusal expert, who can’t see the bomb but has a great big manual with which to talk the defuser through the process. As such, you could play the game sitting back to back with a regular monitor if you don’t have a VR headset.

I can’t speak for how enjoyable that would be, but I can say that the full-fat Oculus experience is wonderful. If you want to play it that way, you’ll need an Oculus Rift DK2 and a Windows PC with a gamepad. You will also need the manual, which can be printed, viewed as a PDF or a webpage from here. Clicking the link will help you avoid Googling ‘bomb manual,’ which is nice, but it will nontheless take you to the bombmanual.com url, which the NSA are very interested in.

Most importantly, you’ll need someone else to play with. Local co-op is especially enjoyable, but it’s perfectly possible to play using a VOIP service and take/administer instruction headset-to-headset.

What do you do? 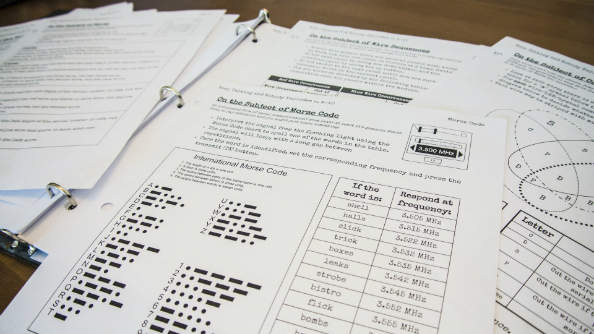 The concept’s unique, perfectly suited to the platform, and simple: the player with the VR headset finds themself in a room with a ticking bomb in front of them. That bomb has several different modules in it, which they describe to the defusal expert.

Said expert then frantically scans the many pages of their manual (a great way to ensure no one sits next to you on the train is to print it out and put it in a folder which you’ve scrawled ‘PHILIP’s BOMB NOTES’ on) looking for a guide on the corresponding module, asks questions that eliminate possible solutions, and advises on which wire to cut, button to press, etc. It leads to conversations like this:

“Is there a vowel in there?”

“And there’s just one blue wire?”

High fives all round. Bombs get increasingly challenging as you progress, timers shorter, modules higher in number and more complicated. They’re procedurally generated too, so there’s a lot of replayability at each difficulty level.

If you don’t manage to defuse all modules before the timer runs out, you die. If you do something wrong, like snipping the wrong wire, you get a strike. If you accumulate three strikes, you die. 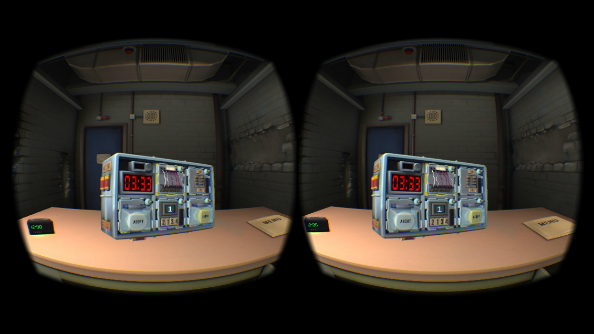 It is indeed, sub-heading. It is indeed. Few games accomplish what they set out to as cleanly and comprehensively as KTANE. It’s a brilliant idea that makes good use of the platform, executed just about flawlessly.

Since the game’s initial release it’s accumulated quite the award cabinet, and a big part of its acclaim has come from the simplicity of that central, new idea. It makes you feel as though you have actually defused a bomb, as a team, and can now bask in your achievement. Wonderful.

Does it make you sick? 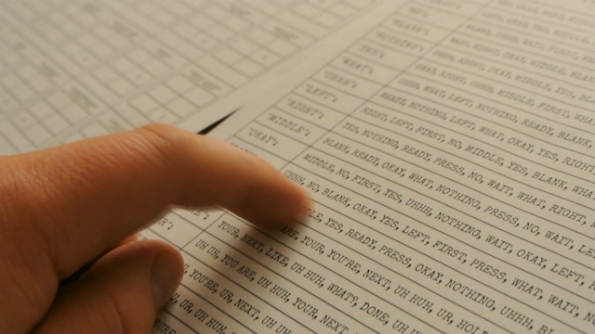 Praise the puke lords, it does not. Part of that comes down to the fact you’re sitting stationary while defusing the bomb, and not required to do much exaggerated head movement. You rotate the bomb using the right stick of your controller, for example.

But it succeeds in suppressing the queasiness on a technical level, too. Your machine only has to render a single, relatively low detail room, and a single high-detail 3D object (the bomb, of course) at any one time, so it’s not difficult to run at high frame rates. And high frame rates means smooth VR experience.

Neither editor Joel nor I experienced any motion sickness after a spirited afternoon of bomb defusal, and we’re both particularly susceptible to it. It’s a resounding pass, then.

The game’s already out on Steam for $14.99, so don’t expect any massive Early Acces-esque evolution in the coming months. The team recently added Steam Controller support and an OSX version, but essentially KTANE is that rarest of things: a fully-fledged VR game you can play now, with potentially hours of content to enjoy.

{"schema":{"page":{"content":{"headline":"Keep Talking and Nobody Explodes is the best VR game out now – if you have friends","type":"news","category":"keep-talking-and-nobody-explodes"},"user":{"loginstatus":false},"game":{"publisher":"Steel Crate Games","genre":"Indie","title":"Keep Talking and Nobody Explodes","genres":["Indie","Puzzle","Simulation","Strategy Gamer"]}}}}