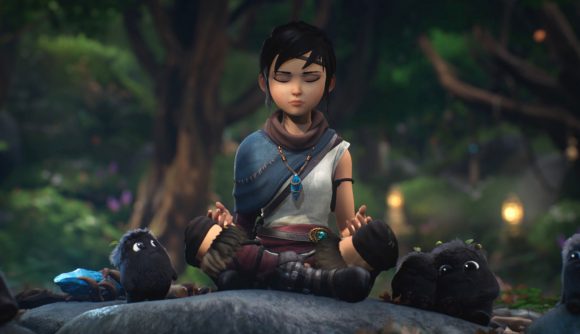 Kena: Bridge of Spirits, Ember Lab’s Pixar-like action-adventure game, launches today, and the reviews are now pouring in, giving us an idea of what it’s all about. Now that we’ve got the write-ups and scores to dive into, we’ve rounded up the Kena: Bridge of Spirits reviews into one handy place so you can check out how it’s fared with the critics at a glance, because we’re just nice and helpful like that.

The reviews so far are largely positive, with some glowing scores in the mix. IGN gives it an eight-out-of-ten, praising its “elegantly simple combat and beautiful world”, while GameInformer gives it a nine, calling it “a hit that you don’t want to miss”. GamesRadar and The Gamer both score it four stars-out-of-five. It’s currently enjoying a healthy score of 85 on review aggregate sites Opencritic and Metacritic.

However, PCGamer has scored the game a less glowing 65/100, calling it a “great-looking but conventional adventure” – a theme that has emerged elsewhere, with Eurogamer’s (unscored) review concluding that “Kena: Bridge of Spirits very much has first game syndrome – something with all the right ideas, weakened by their execution. If it does well – and given the fever with which it’s been followed leading up to its release, I expect it will – it’ll be because we often value triple-A looks and mechanics more highly than attempts at innovation”.

Without further ado, here’s our roundup of the critics’ scores and reviews for Kena: Bridge of Spirits:

So, there you have it – Kena: Bridge of Spirits has garnered broadly positive scores but with a little bit of variety in the mix. The game is available to grab on the Epic Games Store for PC if you’re keen to pick it up, or we have some handy rundowns of the best new PC games and upcoming PC games if you’re on the lookout for something else.