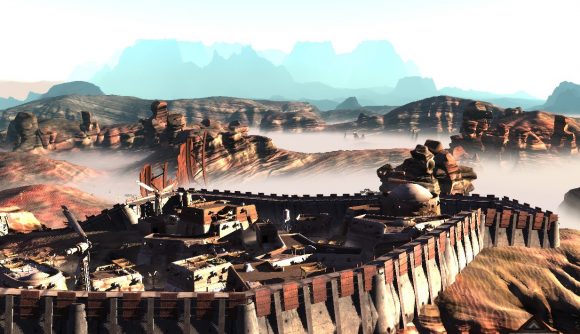 Kenshi is an open-world sandbox RPG about surviving in a post-apocalyptic world full of cannibals, which is a phrase you can also find in a tour guide to Nevada. But Kenshi is also a passion project by Bristol-based developer Chris Hunt, who has been working on it for the past 12 years. After nine years as a solo project and four years in Steam’s Early Access program, Kenshi is ready for its full release, and will launch “for real” next month.

Kenshi gives you the ability to create just about any kind of character you want, but it takes a particular view of how you’ll start out. You aren’t the ‘Chosen One’ in this free-roaming RPG, you’re just a regular person, no stronger than anyone else. And you won’t get any guidance on how to become stronger, either – you have to decide how you’re going to do that, and what you’re going to become in the process.

Eventually, you’ll be able to learn how to construct buildings and even towns. You can become a warlord and recruit soldiers to fight at your side. Or you can become a trader or farmer. It’s all up to you.

“All the games that really inspired me were the disappointments,” Hunt said last week, in the announcement for Kenshi’s release date. “You know when you see an announcement for a game, and it seems like your dream game? You can’t wait for it, you imagine all the things you’re gonna do, how you’re going to play it – then it comes out, and you play it, and it’s the most disappointing piece of dumbed-down, mindless trash ever. Or maybe just not what you expected.”

Kenshi certainly isn’t for everyone – the throwback look is bound to throw some modern gamers off, and the lack of what we’ve come to expect as tutorialization and clear narrative are going to rankle others – just ask Fallout 76 about that one.

But Hunt says he doesn’t care.

“I just made Kenshi because I wanted to play it, and if loads of people don’t like it, screw it,” he said. “I think that’s the best attitude to have if you want to make something great, because you’re not trying to please everyone or tone things down.”

He’s already on pretty firm footing – over the course of its stint in Early Access, Kenshi has garnered more than 5,000 positive reviews and a “Very Positive” rating on Steam.


It’s all set in a massive Mad Max-by-way-of-Seven Samurai open world that Lo-Fi Games says is the biggest since Daggerfall – it’s apparently over 870 square kilometers in size.